THE NIGHTINGALE AND THE ROSE - MELBOURNE

THE NIGHTINGALE AND THE ROSE – Presented by Little Ones Theatre and Theatre Works, 30 May-10 June 2018. Photography Pia Johnson: above - Yuchen Wang and Jennifer vuletic; below - Vuletic and Brigid Gallacher

Let me start with the ingredients that make up this production. The creative team: director Stephen Nicolazzo, set and costume designer, the remarkable Eugyeene Teh. Lighting by the talented Katie Sfetkidis, sound and composition by Daniel Nixon. The Nightingale – Jennifer Vuletic, the Student – Brigid Gallacher and, as the Rosebushes and the Lover, Yuchen Wang. These elements, coupled with Oscar Wilde’s text, is a recipe for brilliance.

Wilde’s dark tale The Nightingale and the Rose is the second part of a trilogy of the retellings of Wilde’s most bewitching children’s stories by the acclaimed Little Ones Theatre.

The Nightingale and The Rose explores beauty, love, art, death and song from the perspective of the Nightingale, who only sees the good in the things and people around her. She is considered in the choice of song she will sing and for whom. So, in the garden, the Nightingale is much taken with a young Scholar who is obsessed with books and with the idea of love, and desperate to dance with the one to whom he has given his heart and driven to finding a red rose so as to be in close embrace with this love. In his mind the red rose and the dance will give him the love he so desires. The Nightingale, stung with the purity of this love, seeks to find a red rose to help the student fulfil his dream.

The statuesque Vuletic who trills as beautifully as the bird she plays – her background in music theatre coming to the fore – is commanding and heart breaking as the Nightingale. She chooses and endures the ultimate sacrifice in seeking the red rose – death.

As the love-sick student Gallagher plays him wonderfully – young and gauche and ultimately, as a self-obsessed naysayer, lacking in compassion and unable to see the good in world around him. In a monologue of disillusion, we hear the voice of Wilde pushing back against his critics, when the student comments on the Nightingale’s commitment: “she is like most artists; she is all style without sincerity.” Whack.

Wilde wrote the student as a male and as director Nicolazzo often does, he mixes gender so that “he” and “she” make no difference. It is the underlying needs and wants, not gender, that makes the text dance. 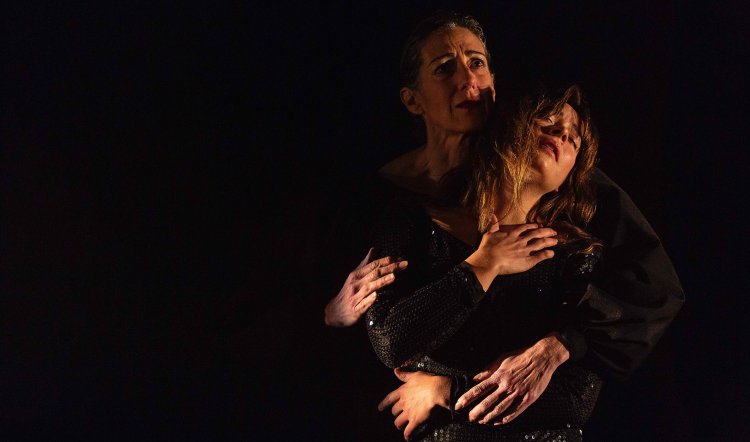 Nicolazzo’s acutely-directed production is choreographed and stylised with the actors working on a small part of the stage and very close to the audience. A large, vertically-hung moon-like disc at the rear of the stage which is the primary set motif, with entrances and exits from behind, and with the Student sitting to the side. It is stark and dramatic with wafting smoke and lighting creating silhouettes on the disc which gave a strong sense of the drama to Vuletic as the Nightingale.

Yuchen Wang is captivating and deliberate as he seeks the strength to be a red rose in a dying garden. His presence is imposing, his voice dulcet. His movements are choreographed with precision – all thorns and blood; a part-vampiric, part-martyrish transfer of life force. I was captivated.

The show is vignette-like, a short story but one that keeps your mind ticking over. I ambled home with a desire to read more Wilde and Niffenegger.