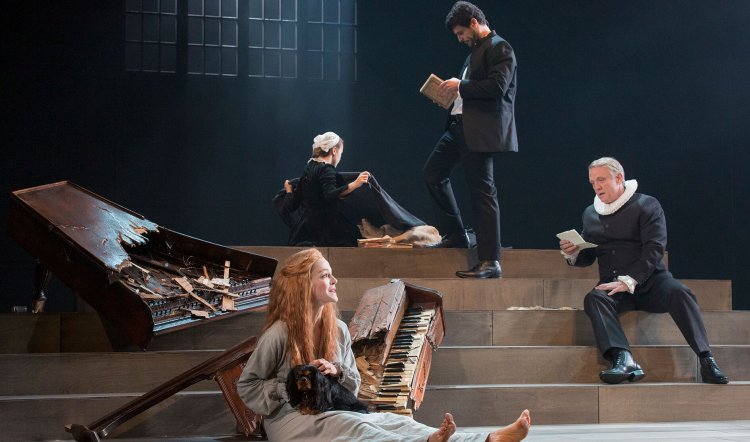 Kate Mulvany’s reworking of Friedrich Schiller’s play is the first to be undertaken by a woman. Ploughing through the 1800 original or Maria Stuarda, its 1778 precursor by Alfieri – both of which begat dozens of plays and operas, plus even more adaptations and translations – it becomes obvious in hindsight why the tragic story of the Scottish queen has been so attractive to male writers and then, why Mulvany’s take on it is so dazzlingly different.

While conflict is at the heart of drama, it’s also – by pitting them against each other – a handy way of disempowering strong women. For instance: Bette Davis and Joan Crawford, Princess Diana and the Duchess of York, Meghan and Kate, Queen Anne and her favourites and, until Mulvany got hold of them, the queens Mary and Elizabeth.

For Mulvany, however, evidence of conflict or a witnessed, physical meeting is not the point. Through their many letters she sees a meeting of minds, a dialogue between young cousins – Mary, nine years older, was 16 when she ascended the French throne while Elizabeth was crowned at 25.

By using their written words to each other the playwright sets them apart from all others. As monarchs they had no social equals and spoke with no one else with such freedom. And by the tacit exclusion of others from the correspondence, she also places the great men of the courts (French and English) as opponents of any relationship or, as time went bitterly by, any rapprochement between the women.

Mary Stuart opens in Fotheringhay Castle, the last of five where Mary was held for 19 years. Set designer Elizabeth Gadsby and lighting designer Paul Jackson have distilled the essence of chilly, dank, prison-fortress into a shadowy, Favourite-lit grey-walled place. Doors open and close silently, and a many-stepped dais represents the impassive discomfort of empty grandeur. Chilly too are Mel Page’s costumes: a sly mix of old and new, plain serge and elaborate brocade, ruffs and bosoms. 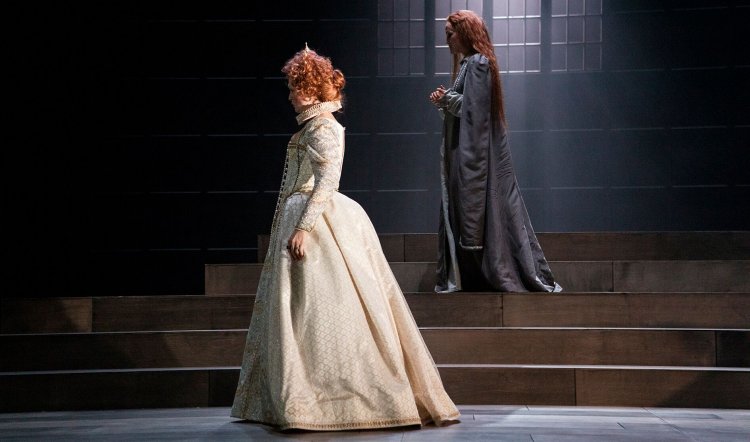 Played with superfine subtlety and heart by Caroline Brazier, Mary is heartsick and arthritic. She has no Bible, no visitors, little hope and just her dog for company. (An impeccably behaved King Charles Spaniel, whose breed makes her a bit of a time traveller in this context!) Mary also retains her baffled sense of humour and the nervous friendship of her keeper Paulet (Simon Burke with a walking stick for his gout and barely-concealed terror at probable danger).

That the play opens in pitch darkness and the crunch of something solid smashing something less solid also warns that menace is everywhere. Paulet’s nephew Mortimer (Fayssal Bazzi) is a saturnine clue to his uncle’s skittishness: he watches, he waits, he could be friend or foe – an ominous symbol of Mary’s life and times.

On a grander, more dangerous scale, the same can be said of Burleigh (Tony Cogin) a grandee whose obsequious manner cannot shroud his sense of entitlement. That he has to bow out backwards to a woman is something he scarcely tolerates.

Frustrated and entitled for other reasons is Leicester (Andrew McFarlane), an eminence in his own opinion and the queen’s close confidant. Like Burleigh, he reeks of male entitlement, but unlike the older man, he is silly enough to still believe he may yet dip his finger in the royal pie.

As Mary is transparent, so is Elizabeth (Helen Thomson) unexpectedly enigmatic. She is politically experienced and canny beyond her years; and all too aware of the ghosts and graspers that surround her. Her venomous treatment of French ambassador Aubespine (Matthew Whittet) is hilariously awful, while the relationship she has with courtier Shrewsbury (perfect Peter Carroll) is, by comparison, tender. 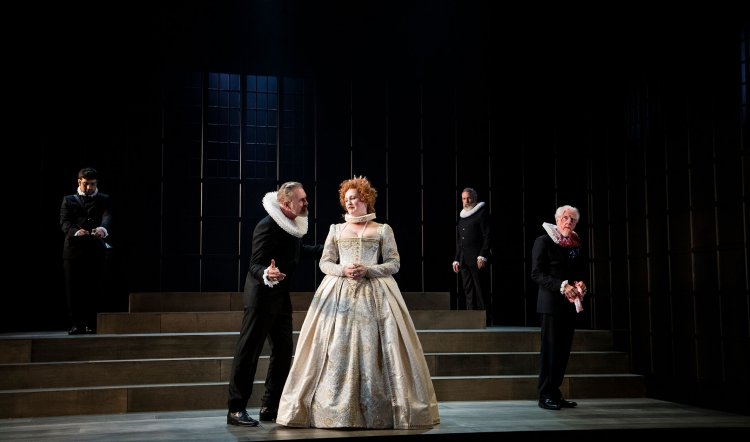 At the same time, she is so far above Shrewsbury in this grim world, she really doesn’t see the mordant old coot. And for the same reason, neither does she see Davison (an owlish Rahel Romahn) her trembling new secretary. This immense gulf between the levels of court life is breathtaking. No more so than the silent presence of a young maidservant. She fetches, she carries, she delivers food and drink, she sweeps, she mops up blood; and although invisible to her betters, as performed by newcomer Darcey Wilson, she is an almost supernatural presence, particularly in the final scene.

Elizabeth revels in her power but her gender means she is almost as imprisoned as her cousin, and she knows it. Consequently her lashing tantrums and childlike behaviour (“My tooth is hurting, kiss it better Leicester”) are evidence of loneliness and the festering influence of a lifetime of sycophants. Her pleasure at meeting her cousin after a party (a deliciously dippy fantasy) is sweetly real and the possibility that blooms is heartfelt. Yet, she is also Gloriana and like any skilled politician, she knows all about responsibility and how to force others to take it.

The end is well known. As their world begins to turn, Elizabeth and Mary are both separate and together once more and the scene becomes the heart-wrenching culmination of director Lee Lewis’s journey with the women and the play. It’s profoundly moving. She has calibrated the performances and spectacle with the surest hand and eye. Between them they reclaim the night. Recommended without reservation.