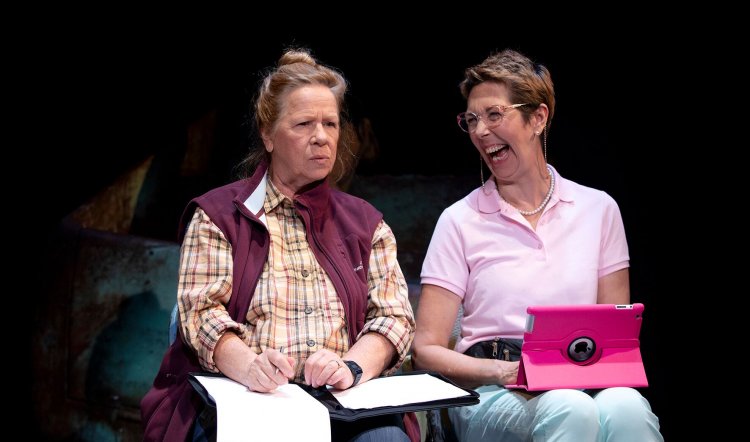 First of all, the season is already almost sold out and extra performances have been added. So...

The Appleton Ladies Potato Race is a new comedy by Melanie Tait. It’s set in the NSW country town of Appleton whose only claim to fame – except there is no fame – is the potato. They grow them, they pack them, they sell them and, every year at the annual fair day, some have raced with a sack of the buggers on their shoulders.

Appleton is a peaceful little place where everyone knows everyone and everyone’s business. They’re nice people, they think, and they even have a refugee (Sapidah Kian as Rania Hamid) and a lesbian (Sharon Millerchip as Dr Penny Anderson). What could possibly go wrong? Well, Dr Penny went away to university and has returned with some funny ideas about politics, equality and whatnot. She cannot believe that the men’s race hands $1000 to the winner while the women run for a mere $200. She decides to do something about it – and all hell breaks loose.

The cast of five represents the many facets of Appleton’s populace and would be recognisable in any small town. Valerie Bader is Bev Armstrong whose reputation for crankiness is exceeded only by her ability to run absolutely everything, including the Fair and the potato race. Her sidekick and general factotum is Barb Ling (Merridy Eastman) a well-meaning if daffy soul who harbours A Secret. 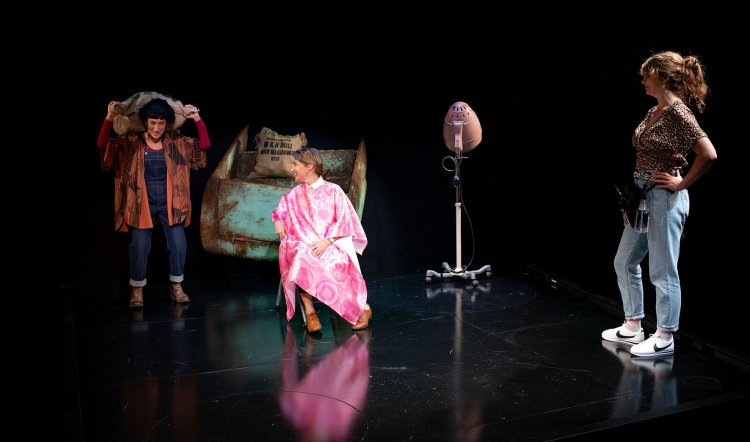 Appleton’s top hair-stylist and ladies’ champion potato racer is Bev’s niece Nikki (Amber McMahon). She’s an old school glamour puss and mole and the clash between her and her cousin Dr Penny is inevitable and instant. Nikki is dynamic and competent but can see nothing wrong with her measly potato prize – after all, she carries 20kgs and the blokes tote 50kgs etc etc.

The doctor’s attempts to show how none of them are on a level playing field, whether it’s jobs, opportunities or life in general, are met with hostility from the town and other women as well as bewilderment. It’s the global big picture writ small. And if you’re wondering whether it sounds either far-fetched or oddly familiar, playwright Tait found herself in precisely this situation in Robertson, NSW when she equalled the prize  purse for a similar event: and found herself on the wrong end of online trolling!

The picture of Appleton painted by Tait (and deftly directed by Priscilla Jackman) in 90 taut minutes is a colourful and detailed one. Rania is treated like a prized artefact until she sides with Penny and then both cop the blunt end of quickly surfacing prejudice. It’s lamingtons versus goat curry and demands that the status quo be upheld by the lezzo. And the wit and humour of the script and characterisations make the darker revelations quite startling.

Yet Appleton is not the mean streets and change and redemption are a given. Although Bev is totally snarky about “the Facebook”, she allows herself to be dragged to somewhere close to the 21st century, while timid Barb’s progress is even greater. The comedy timing and ease with their characters of these two – Valerie Bader and Merridy Eastman – is flawless and quietly hilarious. They are national treasures and it’s a privilege to see them on stage again. 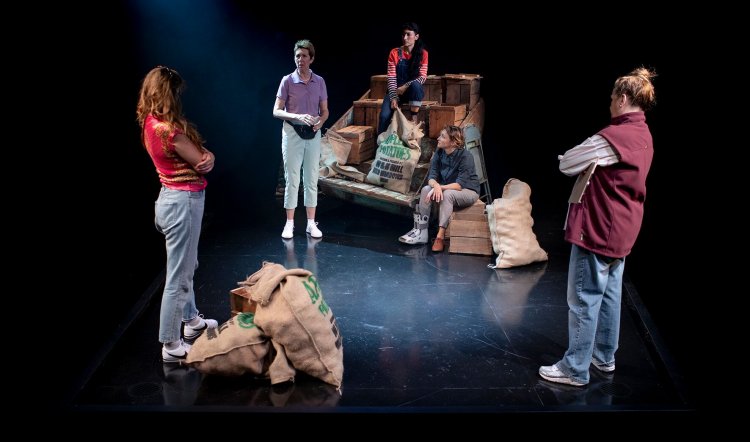 Amber McMahon is another – somewhat younger – comic jewel who swaggers and rools without vanity or care for PC-ness. Her foil – and the main “straight man” for the comedy is, ironically, Sharon Millerchip’s earnest vegetarian Dr Penny. It’s a generous performance that allows the punch lines and merriment generated by the others to have a firm launchpad. And, of course, she’s damned funny in her own right when necessary. In support, Sapidah Kian maintains both dignity and levity as the town’s brown-skinned newcomer who left behind a homeland where courage didn’t mean sticking out her chin to collect money for a potato race.

The Appleton Ladies Potato Race is a gentle comedy with a sting in its tail. The cast is flawless and funny, Michael Scott-Mitchell’s set of the back of a rusty ute that doubles as bleachers and potato storage is simple and gives them plenty of room to shine. In the end, when the chips are down (sorry, couldn’t resist one potato pun) the ladies come through and humanity wins the day. Would that it were so. Recommended.