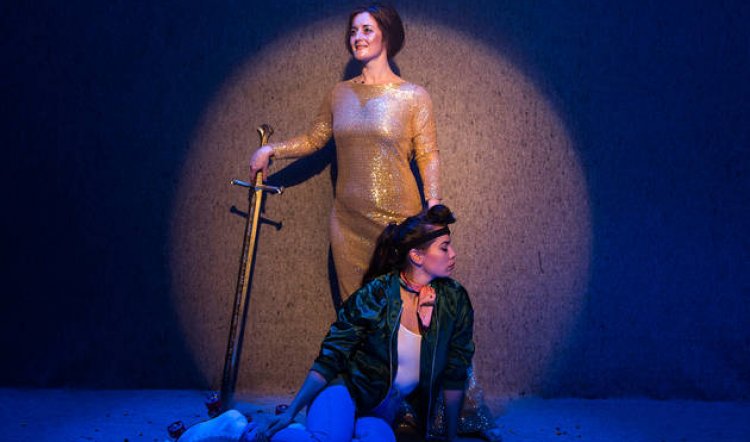 Oscar Wilde’s The Happy Prince is a story for children from the bedtimes before Disney when it was permissible to frighten tots witless or make them cry, rather than rot their brains with schmaltz. In this adult adaptation for the stage by Little Ones’ director Stephen Nicolazzo and performers Catherine Davies and Janine Watson, it assumes even greater power.

The Happy Prince tells of a Prince-turned-golden statue (Watson) who befriends a soon-to-be-migrating-south Swallow (Davies). When they were alive, the Prince knew nothing but riches and comfort. Now they stand high above a town, fixed to a plinth and unable to look away from the reality of Victorian society: poverty, injustice and misery.

The Prince enlists the aid of the reluctant Swallow to right some of these wrongs. They urge Swallow to take the precious ruby from their sword and use it to buy oranges for a sick boy. The child recovers, his seamstress mother is overjoyed. The melancholy Prince is transfigured by the power of empathy, the Swallow not so much. 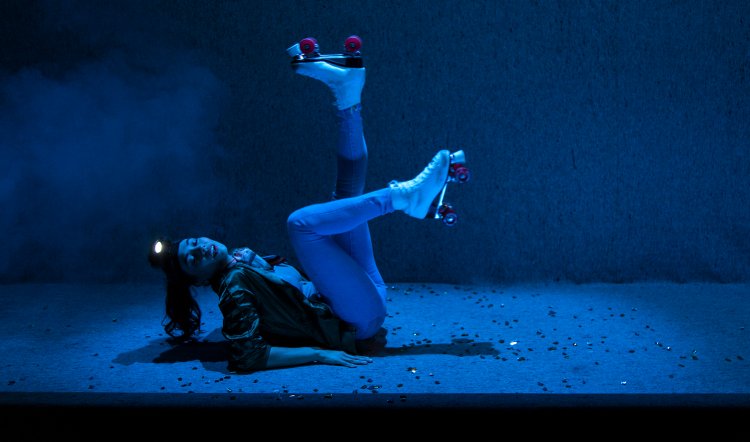 Winter is coming, the Swallow must go; but wait, says the Prince – look – there is another poor soul who needs help. Although exasperated, Swallow is compelled to oblige, even though it means plucking out the Prince’s sapphire eyes and finally, stripping off the gold that covers the leaden body.

While utilising Wilde’s text, the performance is also awash in music (Daniel Nixon) and light (Katie Sfetkidis). With Eugyeene Teh’s seamless, unadorned set, the team creates a trance-like, dance-like state that’s mesmerising when not simply beautiful as the Prince’s love for the Swallow becomes evident.

Crucially, however, Watson’s often slyly-acerbic performance cuts through any romanticism that might creep into audience response, while Swallow’s outfit (also Teh’s work) of chic-streetwear plus roller skates wittily captures the idea of wings and flight and naughtiness. Meanwhile, the Prince’s sleek golden gown offers the viewer a disconcerting entree to a state of sensual otherness. 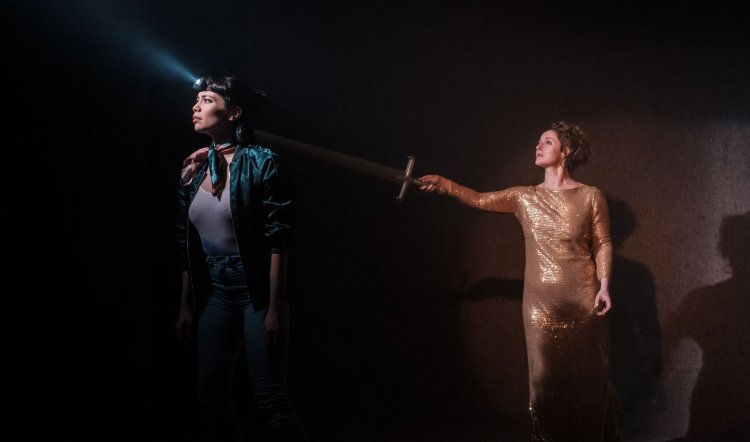 The shadows, shapes and illusions of the Stables stage is the perfect space for this wistful and occasionally macabre tale. Some laughter – mostly oddly timed, such is the weirdness of an audience – is to be found, but in the main, The Happy Prince is an ironic rather than golden hour. It’s made memorable by Janine Watson’s cerebral stillness and tangible depth, while the contrasting bright energy of twirling, soaring Catherine Davies is exhilarating.

Nicolazzo has chosen to end the exquisite, gem-like 60 minutes with the final lines from Wilde’s 1881 poem Panthea. They read: “And all the live World’s throbbing heart shall be / One with our heart; the stealthy creeping years / Have lost their terrors now, we shall not die, / The Universe itself shall be our Immortality.” And as the end of the story and their fate overtake the Prince and the Swallow, it’s immensely moving and apposite.

In the end, however, Watson and Davies somehow bring to mind the opening lines of Panthea: “Nay, let us walk from fire unto fire, / From passionate pain to deadlier delight, – / I am too young to live without desire, / Too young art thou to waste this summer night ...” Recommended without reservation.