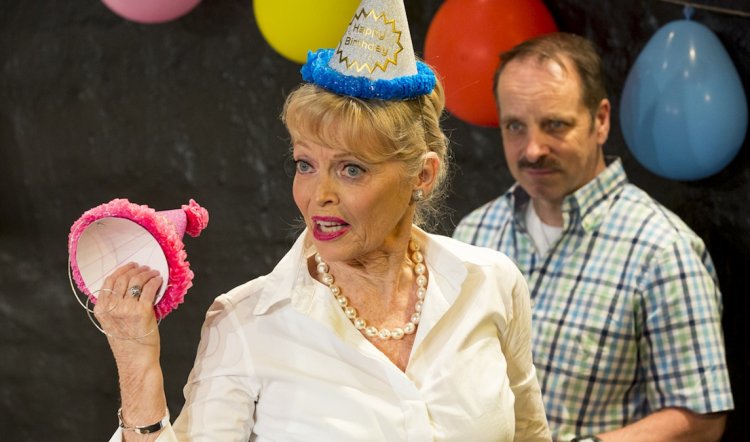 Apparently Family Values is either the ultimate or penultimate play in David Williamson’s extraordinary 50-year career. Appropriate then, that the chronicler and comedic scourge of Australia’s middle class is back where he started in Sydney – the Stables-once-Nimrod – and also at the Ensemble: next month with Crunch Time. There is a smart remark to be made about this conjunction of the avant and derriere garde, but I can’t for the life of me think what it is.

Family Values is the darkest of dark comedies and opens by slyly sucking in its audience with a quip-rich scene between eminent, recently-retired high court judge Roger (Andrew McFarlane), and his wife of many decades and three children, Sue (Belinda Giblin). He’s turning 70 and in a decision which surely calls into question every judgement he’s ever made, has invited the brood home for a family party.

The set-up of these two is classic Williamson as they sweet-sour jibe at each other. He is affably right-wing and confident in his belief in “the law”, while she is a woman who knows better than that, yet is cosy on a cushion of gracious complacency. Piquantly, then, Roger’s appeal makes him more dangerous than an out-and-out bigot, and Sue’s semi-gracious acceptance of his views is similarly perturbing; although she’s fast losing patience. However, if you’re one of those who see yourself satisfyingly reflected in the wine, canapés, nice paintings and pleasingly affluent lives, their exchanges are more comical than not.

Nevertheless, the chortles last just long enough to encourage the foolhardy to relax. Then, a barrage of acrimony, twists and character turn-abouts make for a smugness-shattering 90 minutes. Here’s a playwright telling his peers exactly what he thinks of them. And it’s not flattering.

The elder daughter arrives first. Lisa (Danielle King) is a political activist whose work and views are diametrically opposed to her father’s. She is accompanied by a nervous young woman named – maybe – Daniela (Sabryna Walters) and they need the keys to the family beach house at Killcare, for reasons Lisa isn’t willing to explain. Roger being Roger, he refuses. Sue being Sue, she demands he hand them over. 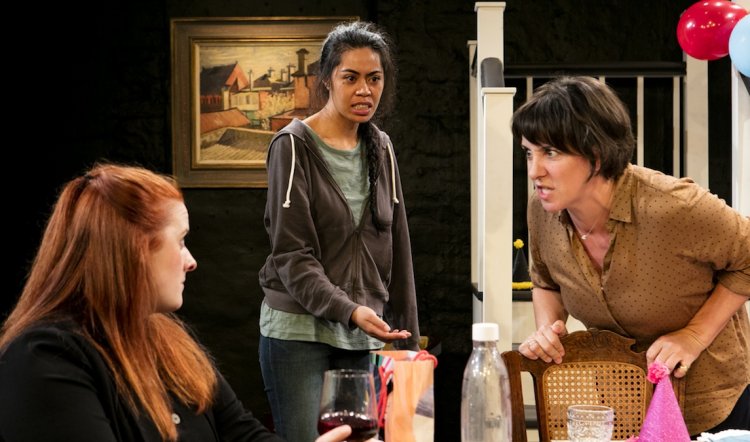 The stalemate is interrupted by the appearance of Michael (Jamie Oxenbould), the middle sibling whose childhood obsession with Lego and building world landmarks out of matchsticks has been replaced by Hillsong. He believes that far from “blessed are the meek”, the way to go is “3 John, 1:2”, and “I wish above all things that thou mayest prosper…”

The final arrival, and the most tempestuous, is youngest child Emily (Ella Prince). She’s a Border Force officer on a patrol boat having left her boring anaesthetist husband for Noeline (Bishanyia Vincent) the captain of the vessel. Roger has previously told Sue he’s always found anyone named Noeline to be strident and in this instance, he’s not wrong.

The misbegotten party is set in the dining room of the family home with a staircase that promises to be a series of ascending/descending jokes. A string of coloured balloons is the winsomely-incongruous party decoration. (Set design by Sophie Fletcher, lighting by Benjamin Brockman.)

The frankly scary Noeline quickly figures out that Daniela is actually Saba Nazari, an Iranian asylum seeker who’s on the run after being brought to Australia from Nauru under the Medevac legislation (remember that?). After years of incarceration with no end in sight, Saba attempted suicide. Independent psychiatric assessments have deemed her at risk if she's returned to the hellhole, but the Minister for Home Affairs doesn’t give a shit: she will go back.

Where Family Values goes from here turns into a scathing portrait of conservative, so-called Christian and definitely white Australia in 2020. It’s a seething cauldron of ingredients including the vicious anti-marriage equality campaign, the malign influence of the Murdoch press, the repression of the media and public freedoms and the creeping impact of national “security” laws, and Islamophobia. 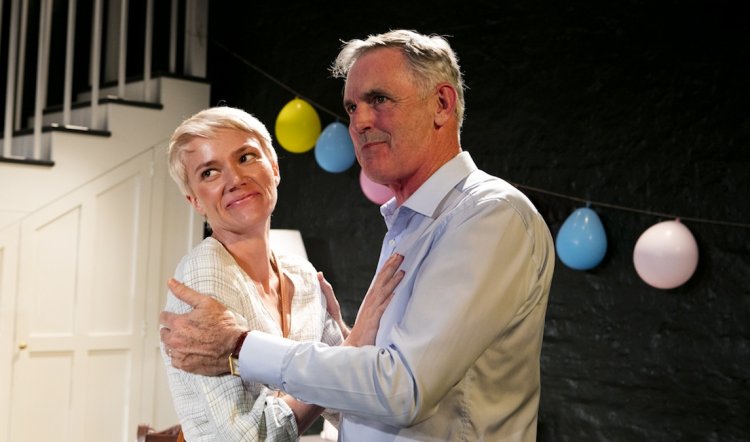 Each of the six characters is dragged or jumps feet-first into ferocious arguments around these dinner party-destroyers. Add the siblings’ resentments and jealousies and the scorn heaped on each by the others and the play’s title takes on provocative meaning. The drama is palpable as the warring parties and ideas are hurled about. It’s impossible to stay neutral, although one might also consider changing sides from time to time.

The casting of each role is astute: Andrew McFarlane is the deceptively civilised patriarch around whom the family revolves. Belinda Giblin shows yet again that her comedy timing is wicked when she’s not plucking heartstrings. Danielle King’s leftie Lisa is the least rewarding role but she creates a watchable and dynamic presence. Sabryna Walters is also deceptive and highly effective as the fragile Saba. Her quietly impassioned speech to the family ought to be heard by all Australians.

Ella Prince makes weird, passive-aggressive whingeing into an art form while Bishanyia Vincent’s diesel dyke with a heart of stone somehow achieves and makes plausible the flip to a glimpse of humanity. Both are riveting.

Against expectations, a virtual docu-drama about family nihilism ends up suggesting there may be hope and even a hint of redemption and sardonic laughter in our future. Directed by Lee Lewis with urgent momentum and a firm vision of where each of these well-fleshed archetypes is going, Family Values is a play that suggests retirement is the last thing David Williamson should be considering. It is fiery, funny, politically cunning and dramatically assured. That sweet Sue is the one to finally turn the tables on her stubborn husband and children is a final, subtly comical masterstroke.