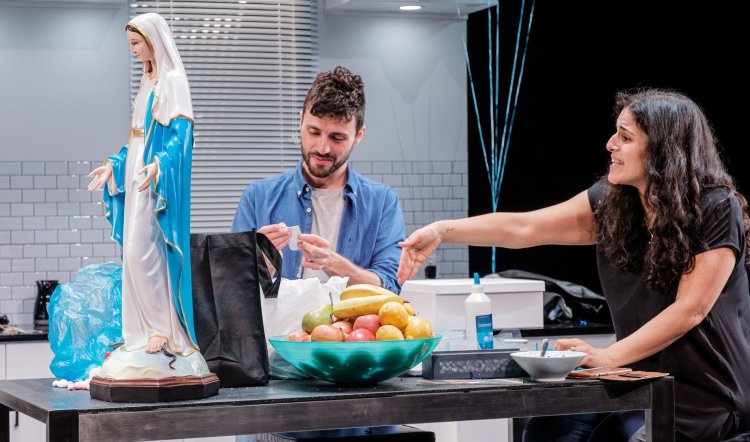 In 2019, inner-city theatre-goers were treated to James Elazzi’s first fully-staged play Omar and Dawn, at KXT. Word was already circulating about this new playwriting talent after a try-out version of Lady Tabouli at Griffin’s Batch Festival earlier in the year. Now, the cut and polished “final” version (if anything is ever truly final in Elazzi’s fertile mind) is at Riverside in a short Sydney Festival season. Rush for tix – don’t dawdle.

Directed, as before, by Dino Dimitriadis, Lady Tabouli takes place over one tumultuous day in the lives of a Lebanese-Australian family as they prepare for the christening ceremony and after-party for an eight-month-old boy. His young mother Josephine (Nisrine Amine) and her mother Dana (Deborah Galanos) are pushing themselves and each other into the outer reaches of stress in Dana’s kitchen.

The opening scenes of domestic mayhem and barely-contained panic are gleefully funny for anyone from any of Australia’s ethnicities. Who won’t recognise and shudder at the crazy ambitions for one-upping the neighbours, or best friends or the community in general? Mother and daughter are insistent on not only gorgeous outfits, a shiny new statue of the Virgin for “the salon”, and professional makeup, but also the finest christening robe, perfectly-executed name tags, the correct colour (blue, not mixed) of sugared almonds and a well-pressed shirt and suit for godfather presumptive, Josephine’s brother Danny (Antony Makhlouf). 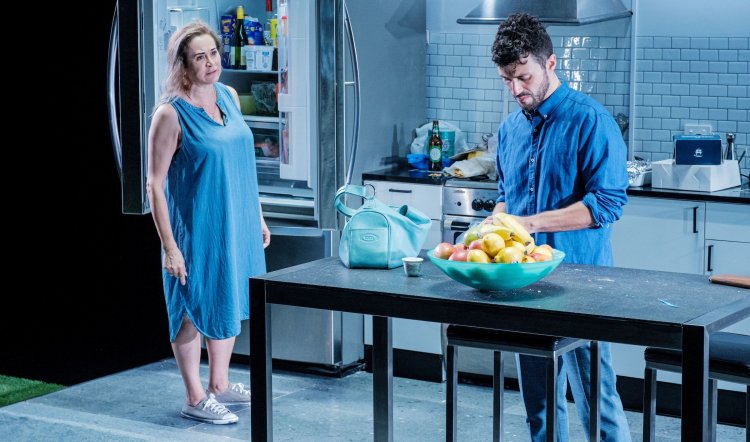 Circling haplessly on the outer edges of this maelstrom of determined suburban womanhood is old Aunty, calling from Lebanon and yammering away on speakerphone from the kitchen benchtop. And there’s Mark (Johnny Nasser), brother of Dana’s late husband, lifelong mentor and mate to Danny and seemingly the only sane person in the room. The preparations, hiccups, arguments and bunch of helium-filled baby blue balloons fill the stage with mostly hilarious action as the morning wears on.

There is an elephant in the corner of the room, however, and although not as visible as the vertiginous step ladder in another corner (a gloriously detailed set that’s both hyper-real and abstract by Jonathan Hindmarsh and equally imaginative and apt lighting from Benjamin Brockman). Danny broke off his engagement to Natalie some weeks previously and her mother is still coming to the christening, but not before a phone conversation with Josephine that lowers the kitchen temperature to arctic depths.

Danny is distraught and supported only by the ghostly presence of Sabah (a louche, blonde-wigged Nasser). To save non-Lebastrayans consulting Dr Google: Sabah (1927-2009) was the “Empress of Lebanese song”. She released more than 50 albums, had a repertoire of 3500 songs, appeared in 98 movies and more than 20 Lebanese stage plays; and she appears to Danny when he needs her most to offer sardonic and glamorous advice.

After the first half of comedy and family chaos, where music and sound by Ben Pierpoint help paint a warmly human picture, we’re led on a steadily more ominous journey as director Dimitriadis delicately calibrates performances, pace and atmosphere as the play takes a sharp turn from joyous bedlam into dark places and revelations. And just as many will have recognised the truth in comedy, so will many more have to confront the underside of that laughter.

Lady Tabouli is a remarkable achievement, both as play and production; and in the performances of the four actors. It’s an economically entertaining 90 minutes of acutely-observed and unflinching docu-drama. Its underpinnings are the votes of so many “Christians” and ethnic minorities against marriage equality, and it plays out to an inevitable and honest end. Not so much food as a feast for thought – and afterwards, head up Church Street for the tabouli, etc you will by now be craving. Recommended without reservation.