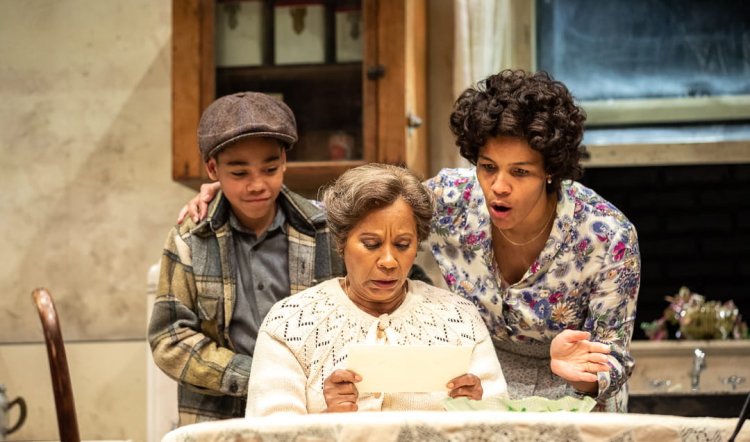 A RAISIN IN THE SUN

A Raisin In The Sun, Sydney Theatre Company at Wharf 1 to 15 October 2022. Photography by Joseph Mayers: above: Ibrahima Yade, Gayle Samuels, Zahra Newman; below: Nancy Denis; below again: Bert LaBonté

Thanks to “long Covid”, catching up with a play weeks into its run is a privilege – especially when the production is as extraordinary as STC’s A Raisin In The Sun.

Why have we not seen this fabled 63-year-old work before when names such as O’Neill, Albee, Mamet, Williams, Miller or Wilder constantly appear in our theatres? The most obvious answer is that A Raisin In The Sun requires a cast of 12 Black actors. Another might be the glacial pace of audience evolution – from Olivier to Ayckbourn and now, finally, to Lorraine Hansberry. In Australian terms, it’s been three decades from Jack Davis and No Sugar to Leah Purcell and The Drover’s Wife.

Hansberry was just 28 when she wrote this play: in two substantial acts with substantial characters and a substantial text; Shakespeare would recognise it. The production begins with superbly thoughtful direction by Wesley Enoch – arguably his best work to date. The story of the poor, Younger family living in a rented apartment on Chicago’s South Side is one that’s steeped in the specifics of US history while appallingly contemporary and universal. 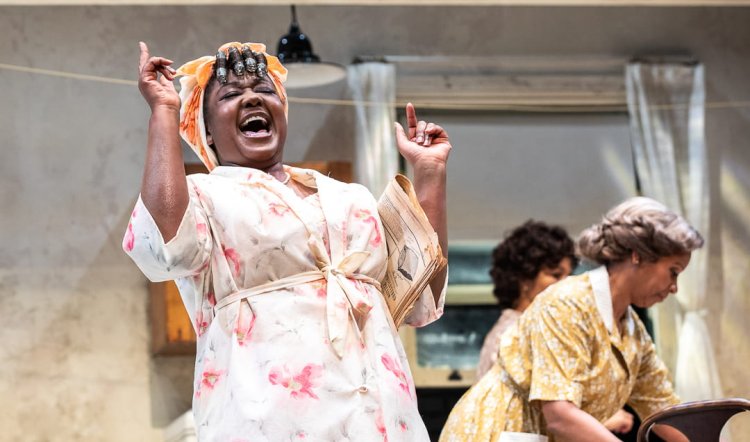 Mel Page’s set design is as fine as could be wished for. It’s the width of Wharf 1’s stage. A living room with a kitchen sink, stove and fridge across the back wall that gives the home its name. On either side, a door leads to a small bedroom – one for Walter and Ruth, the other shared by Beneatha and her grandmother; Travis sleeps on the sofa. There is one small window above the sink – these poky apartments were notoriously dark and divided from larger ones. Their front door leads to a corridor and a bathroom shared by other tenants. Page’s home for the Youngers is one of the best realistic sets ever, her 1950s costumes likewise.

Money, aspiration, humiliation and pride underpin A Raisin in the Sun. The title is from Langston Hughes’s poem Harlem in which he asks, “What happens to a dream deferred?” And: "Does it dry up like a raisin in the sun?” He and Hansberry were among the artists and intellectuals to define and portray the lived Black experience of urban America as Civil Rights stirred. It was a generation born and raised in the North whose parents and grandparents – including Lena – left the South to escape segregation and to make a better life. Much like Lena’s small pot plant – that scrapes a life on the windowsill but couldn’t be said to thrive.

A life insurance policy of $10,000 – legacy of the recently deceased family patriarch – is both a dream and a nightmare. Lena uses part of it to buy a house in a White neighbourhood and also earmarks some for would-be doctor Beneatha’s education. Walter demands it for a business venture. Ruth stoically folds laundry when not ironing. These people are recognisably ordinary human beings and were Hansberry’s furious response to the stereotypical “coon caricature” of Hollywood and Broadway. Among the most (in)famous: Stepin Fetchit and the “black mammy” maidservants.

She includes a satirical mammy in neighbour Mrs Johnson (Nancy Denis) who once would have been played by Louise Beavers. Mrs Johnson doesn’t actually say “Lawks-a-mercy” or throw her apron over her head, but she could be Gone With The Wind’s Hattie McDaniel who once said to Black detractors, “Why should I complain about making seven thousand dollars a week playing a maid? If I didn't, I'd be making seven dollars a week actually being one.”

This dichotomy is also played out in the form of Beneatha’s two beaux: Nigerian student Joseph (Adolphus Waylee) and would-be bourgeois American George (Leinad Walker). They are night and day. Politically progressive Joseph wants Beneatha to accompany him to Nigeria, while assimilationist George is both colonialist and capitalist in his white shoes and attitude. The only White person is the neighbourhood rep sent to offer the family money not to move in to their new house. He (Jacob Warner) seems nice but only until he feels thwarted.

A Raisin In The Sun is deeply fascinating and rewarding. The production does it proud with wonderful performances and realisation from the creative team. As well as its politics and social landscape, the play is funny and absorbing at just under three rich hours. That Hansberry died at just 34 is a tragedy. See this if you possibly can: once in a lifetime opportunity.