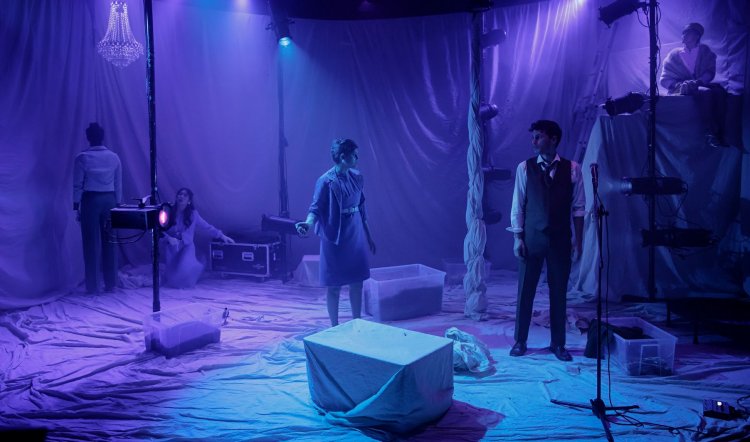 Burn Witch Burn is “adapted by Tasnim Hossain and Claudia Osborne.” Adapted from what? In 1943 Fritz Lieber (an American) published a novel: Conjure Wife. According to Wikipedia and science fiction author and critic Damon Knight, “Conjure Wife, by Fritz Leiber, is easily the most frightening and (necessarily) the most thoroughly convincing of all modern horror stories...Leiber develops [the witchcraft] theme with the utmost dexterity, piling up alternate layers of the mundane and outré, until at the story's real climax, the shocker at the end of Chapter 14, I am not ashamed to say that I jumped an inch out of my seat...”

The novel inspired movies, including one, also titled Burn Witch Burn (1962) from which the play appears to have been adapted. So far, so promising, as are the first ten minutes of the play. It begins with university professor Norman, dressed in a brown suit and brown tie. His lugubrious delivery into a standing mic is also brown (costumes Monique Langford). It’s mildly amusing but on opening night a claque of one shrieked like a kookaburra, so hilarious did she find him. Distracting enough to lose the thread of what he was saying, although superstition, neuroses, and disbelief came into it.

Norman goes home to find his wife Tansy is being a bit odd. He discovers plastic crates full of what she calls “craft” equipment, although it’s obviously twigs, sticks, compost, and mulch. She’s a witch, Tansy says and his success and safety are down to her expertise with the crates’ contents. He splutters the academic equivalent of “pshaw” and disposes of her stuff. They are not happy – even less so when things begin to go suddenly and seriously wrong for him at uni. 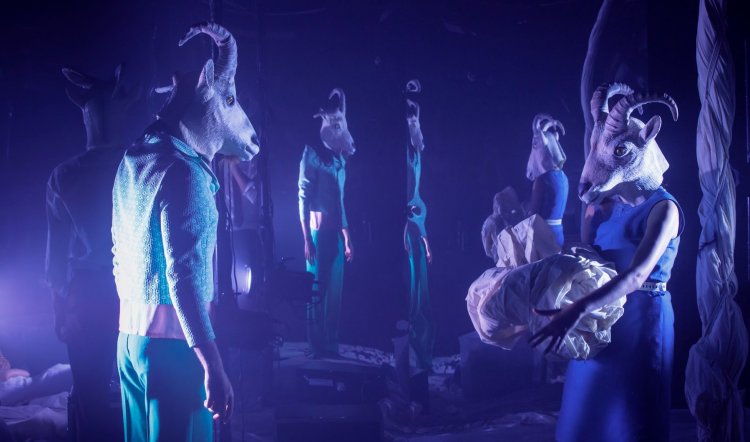 Also looking odd and being mysterious are three other people. They occupy a stage that is floored and draped in tens of meters of white fabric (set design Emma White) with various lights and bits of rigging lending a further curious element (lighting Veronique Benett). The company, of academics and wives, Sheree da Costa, Daniel Gabriel, Alex Packard, Tivy Siripanich, and Alex Stamell continue to be peculiar (director Claudia Osborne). The wives are witches, of course, and all move around like somnambulists, determinedly disconnected.

Rather more animated is a chandelier. It descends from the ceiling and flashes its lamps. And then there are the goat heads, with glowing agate eyes and crooked horns. These are donned by three actors about halfway through and provide some minutes of comic relief. It’s possible, however, that this is unintentional as goats have for long represented the Devil.

A genuinely creepy atmospheric element comes from Chrysoulla Markouli’s soundscape. It suggests what might have been intended and also what might have been. It never is, unfortunately, and it’s difficult to grasp why anyone ever thought this was a good idea. Nevertheless, the worst thing about the play and production is the cliched and disrespectful portrayal of witches – in essence, women who, over the centuries, have been ridiculed, cast out, tortured, and murdered because they were different, unusually skilled, or living lives independent of society and its patriarchs. For its part Burn Witch Burn tortures the audience and ridicules witches. 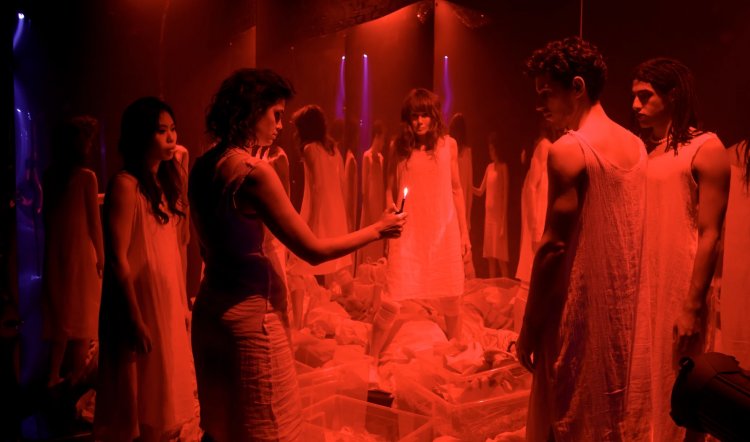 On the way out of the theatre one patron asked another: “What was that about?” Their companion replied, “Self-indulgent twaddle.” And we’ll never know what happened at the end of Chapter 14. Two stars for the goats.