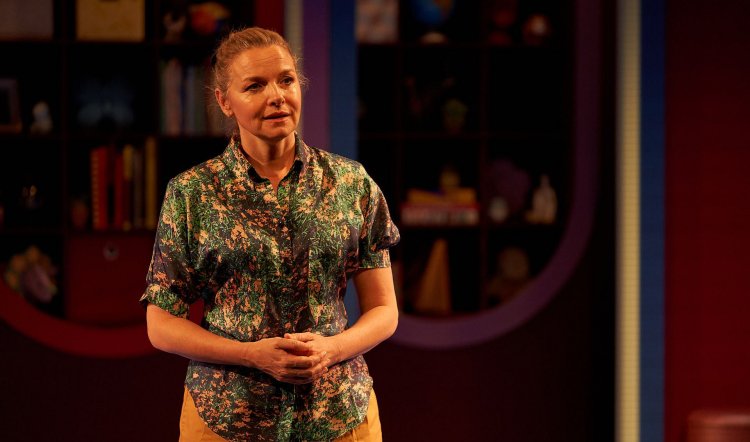 GIRLS & BOYS, Adelaide Festival and State Theatre Company of SA at the Odeon Theatre, 28 February-12 March 2022. Photography by Sam Roberts - above and below: Justine Clarke

Written by Dennis Kelly in 2018 and first staged in London at the Royal Court, Girls & Boys is startlingly up to the minute and could have been dreamed up yesterday. It’s essentially a monologue with the sole protagonist conjuring several other characters by gesture and recollection. She is the unnamed young Woman (Justine Clarke) and in the opening minutes she enlists the audience as partners in jokes, knowing asides and confidences through the first half of an absorbing 110 minutes.

Girls & Boys is an unremarkable seeming title for a play that takes up the most provoking themes of 21st century domestic life. Yet with deceptive simplicity and misleading humour, it quietly eviscerates it all. We meet the woman in her youth when she is Essex’s answer to Kylie Mole but even more mouthy and outrageous.

After preliminary introductions to her character, in which we learn she’s been a hopeless if hilarious slag in the past, the play opens in a queue to get on an Easyjet flight from Rome when the young woman first encounters a bloke who transcends all expectations to become her unlikely hero. Drawn in by her engaging playfulness and sparkling-eyed honesty, the audience quickly relaxes into complicity with her naughty but nice account of their marriage and subsequent two kids.

Along the way he encourages her to follow her ambition and the career she so badly wants. And in which she succeeds beyond her – and his – expectations. At the same time his own occupation of importing Continental antiques also burgeons. They have it all, except, of course, when she’s home with little Leanne and little Darren and the exhausting business of trying to be a good mummy and not go stark raving bonkers.

Dressed in a tot puke-resistant patterned blouse, practical pants and velcro-tabbed trainers, and confiding all in cocky Estuary English, Woman is the epitome of a young, first worlder until she stops the chortles almost mid-gag and announces, “This is the hard bit.”

Clarke’s transformation at this point is instant and shocking. Before our eyes she ages ten years in posture and the drawn lines of her face. Her animation has vanished as she stares into an abyss that we can only imagine – and fail to imagine, because what’s in the abyss is unimaginable. 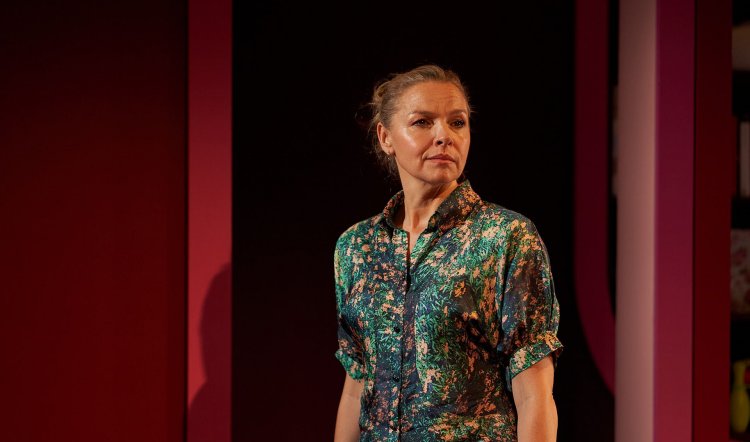 Directed by Mitchell Butel, to find and maintain a delicate, gradual change-up of pace and emotion as she moves from one side of the stage to the other. She uses elements of Ailsa Paterson’s subtle middle class setting of modern minimal furniture, nicely presented toys, knick-nacks and comfortable domesticity; all the while Clarke is a mesmerising presence.

As the play descends inexorably into nightmare it becomes impossible to take your eyes off her. The audience is silent and unmoving, all chuckles and laughter stilled. No one gets off the hook including, with rueful honesty, Woman herself.

There are two once-in-a-lifetime, astonishing solo performance works in this year’s Adelaide Festival, Eryn-Jean Norvill’s Dorian Grey is one, this is the other. Girls & Boys is a clever play intelligently built on quiet passion and no hiding places. It will change your image of Justine Clarke forever – and should result in a swag of awards for her and the production; she is brilliant. Fight for tickets.