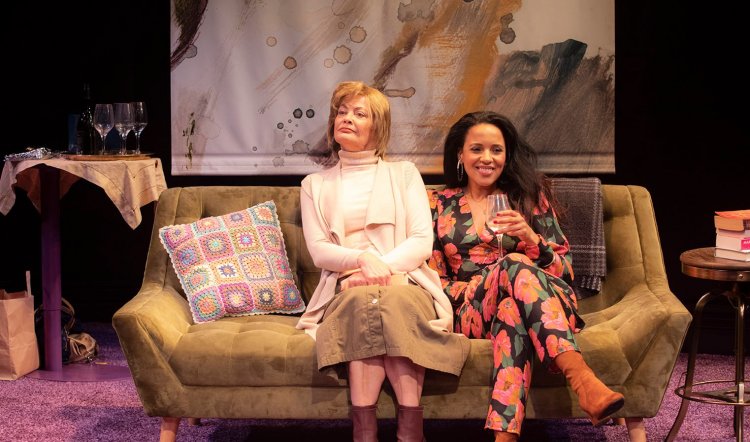 The stage lost a rare talent when Tracey Trinder died even as her first play Killing Katie was in development at the Ensemble. To that point, she had been a successful television editor and scriptwriter but had always wanted to try her hand at playwriting. What a pity this is the one and only.

Nevertheless, it’s a fine legacy and brought to life by a fabulous cast, director Francesca Savige and dramaturg Jane Fitzgerald. Catching up with the production on a Thursday morning matinee, it was clear from the gasps and titters in the audience that many of the women had been or are in book groups.

The action begins in the Present – signaled by a pink neon sign on the back wall, which alternates with one announcing “Past”. Two members of a long-defunct book group are meeting in a bar to discuss Breaking News.

Linda (Bron Lim) is the mouse of the group; in awe of the others and scared of her own shadow. Meeting her, and late as always, is Sam (Georgina Symes), a frenetic exerciser and mother whose daughter has her tethered via the phone which is always to hand. 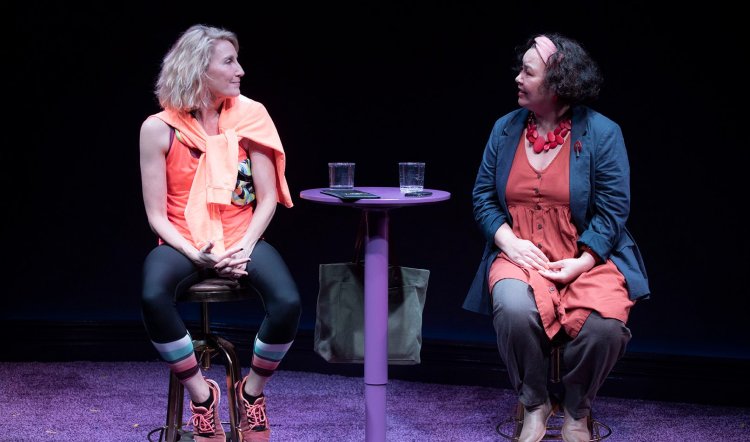 They were in a group which met at the home of bossyboots Robyn (Kate Raison) – and whose sardonically-inclined mother Angela (Valerie Bader) was the mistress of the almost imperceptible eye roll and eyebrow twitch.

The news Linda is busting to share with Sam is that since the group foundered following an incident involving olives, Robyn has written a novel. It’s to be published and it’s about a book group. Both friends are appalled because, each in their own way, have put the incident behind them and got on with their lives.

The past is revealed (pink neon) in a group meeting where Sam did the unforgivable and invited a new member without consultation. Robyn is appalled. The rules were clad in iron years ago, but too bad, because in bounds Katie (Chantelle Jamieson) and bang goes the group dynamic. As time goes by – they meet monthly – Robyn’s over-gracious manners visibly fray and finally, from between her teeth she hisses, “Either she goes or I go.”

As any member of a defunct book group knows, this threat is the beginning of the end. It’s only a matter of time before too much chardonnay, uncomfortable truths, and snarls such as “Well, if you really want to know what I think…” curdle the canapés. Along the way, however, there are 80-odd minutes of barb- and epithet-laden exchanges that get funnier and more hideously recognisable as inhibitions are loosened. 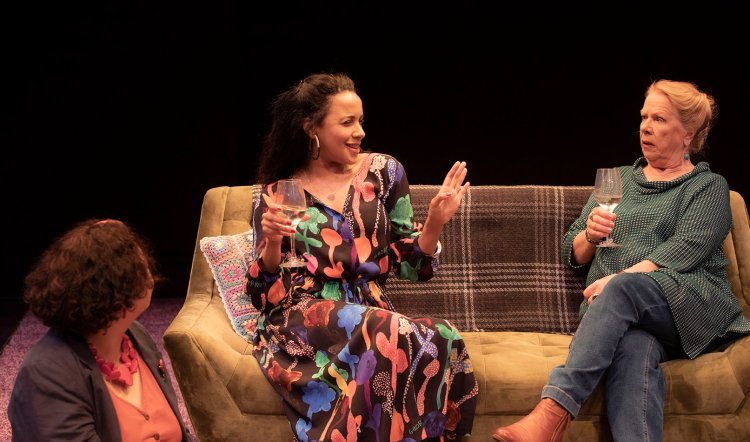 The production keeps pace with the story by way of such elements as a set of 50s flying ducks whose fate is integral to the cold war between lemon-lipped Robyn and blithe spirit Katie. Then there is Robyn’s metamorphosis from beige flats to killer-heel Louboutins. As designed by Tobhiyah Stone Feller, and lit by Kelsey Lee, the women and their environment are at once comical and awfully real. And Daryl Wallis’s music and sound design add even more.

The book launch is the least convincing scene and strongly suggests no one involved has ever been to one, but it’s a minor glitch as Linda and Sam are way too interesting and terrified about what might be in the book, are overwhelmed by the glitzy event and thrilled to spot Ita among the guests. The final moments are a further touching twist to the tale.

The company and their director are a solid gold unit in delivering 90 minutes of LOLs, chuckles, gasps, and groans. Recommended.