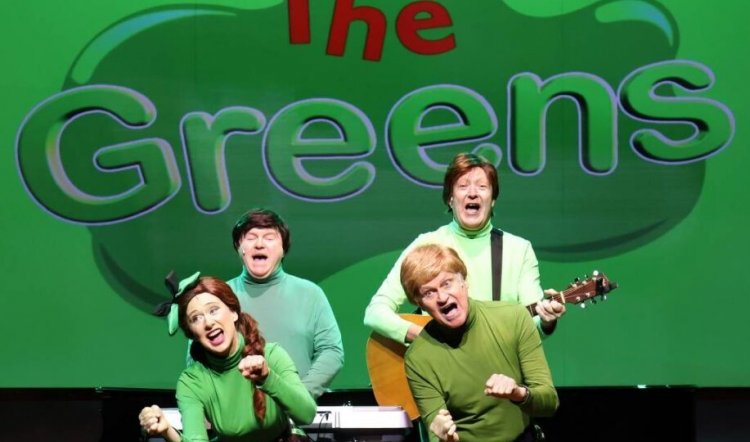 It’s that time of year again: Wharf Revue time, that is. The 90+ minute show begins with four of those sideshow alley clown faces slowly rotating back and forth – and not a ping-pong ball to be had – as they sing an unkindly modified “Happy Days” (…are here again, if we’re lucky…)

As satirical lyricists and song thieves, the creative trio of Drew Forsythe, Jonathan Biggins, and Phil Scott have never been better. Indeed, it’s traditional for Revue fans to announce solemnly to each other at the end of a show, “Well, that was the best yet.” And each year it turns out to be true. They do get better and better, much like Grange – aging does not weary them.

For instance, turning the new parliamentary force of the Greens into The Wiggles is obvious after the event, but the songsters and parliamentarians are suddenly revealed in all their vacuously-beaming jollity and instantly, two sets of social icons are impaled on one skewer.

Similarly “Albo Baggins and the Mountain of Debt” not only has a go at the new PM’s temporal dilemmas but also at fans of the Lord of the Rings films. Albo returns later for “Albo in Wonderland” wherein the Mad Katter arrives in a towering stetson with price tag and much incoherent spluttering.

Old favourites such as John Howard – annoyingly without his specs and monstrous eyebrows these days - appear on screen in filmed interludes that allow the performers to change wigs. The running gag this year is the ABC’s gasp-inducing series You Can’t Ask That - in which the unaskable questions are asked. Among the effective appearances: Kristina Keneally, Donald Trump, and Rudy Giuliani.

Of the line-up of top pollie targets, Peter Dutton is notably missing. However, satirising a man who solemnly told 2GB this week that, “you can’t store renewable energy at the moment,” is possibly beyond satire. Although Chris Bowen had a good go in Question Time when informing the Leader of the Opposition that the battery, or voltaic pile, was invented by Alessandro Volta in 1800. (Speaking of voltaic piles, the odious Craig Kelly and Clive Palmer also appear.)

Katy Gallagher is a new star – Mandy Bishop bringing the finance minister to fiduciary life. Drew Forsythe’s turn as Pauline Hanson is greeted nowadays with something approaching affection as the dreadful woman malaprops her way through life. Jonathan Biggins – or PJ Keating to be precise – is also greeted with warm applause while Phil Scott’s deadly accurate smirk provokes instant laughter as he joins Keating and Julia Gillard (Bishop) as Kevin Rudd. During a chinwag at an ALP conference, it’s clear that “forgive and forget” is not on the policy agenda.

Another excellent newbie is Bishop’s Zampatti-clad Allegra Spender. As well as acid-dipped lyrics for “Hey, Big Spender” Bishop also reveals a bigger, better voice than in previous years. It also means she more than holds her own in the ensemble numbers. 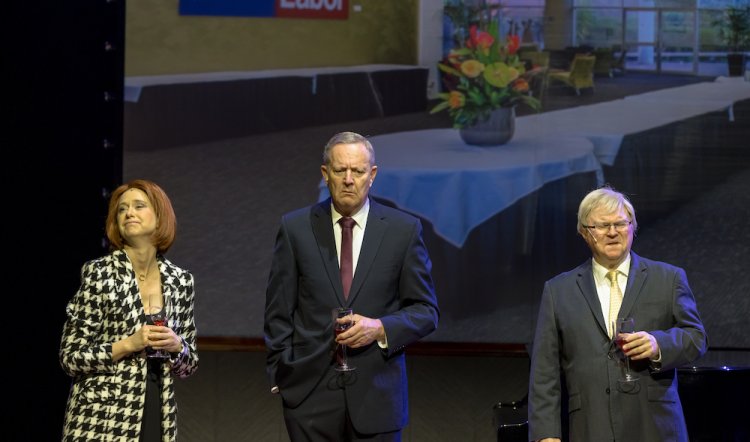 The wickedly funny tone turns in a moment when a solemn Forsythe transforms the C&W classic Ghost Riders into a heartfelt paean to our soldiers returned as mental wreckage from Afghanistan and other pointless wars. It’s a beautiful twist in what is otherwise a laugh-a-minute show.

The culture wars get a good workout, as does Jacquie Lambie – another high point for Bishop – while the Trump-appointed ultra-conservative judges on the US Supreme Court were always going to be a shoo-in for a Supremes medley. President Joe Biden (Forsythe) merrily gets his own back, despite stumbles and trips, as does an uncanny King Charles III, aka Biggins. He delivers a winningly caustic warning to Australians which should ring in the ears despite being followed by a finger-snapping “Inner-West Side Story.”

Peta Credlin gets a mordant go-round as do Tanya Plibersek (whose travails on behalf of the environment are too true to be funny), Tony Burke, and Chris Bowen. And, in a piquant look into the future, Albo is on a Zimmer frame when the Grim Reaper comes calling. The aged hero reveals he resigned after his sixth term for wildly plausible reasons. It’s yet another moment of extreme wit and cleverness in a show that overflows with wit and cleverness.

Along with the Koala and Dame Judi Dench, The Wharf Revue is a true National Treasure. An item about the Queen in heaven was held over from this year (too soon?), so let’s anticipate Revue 2023. It’s bound to be the best ever. Recommended without reservation.