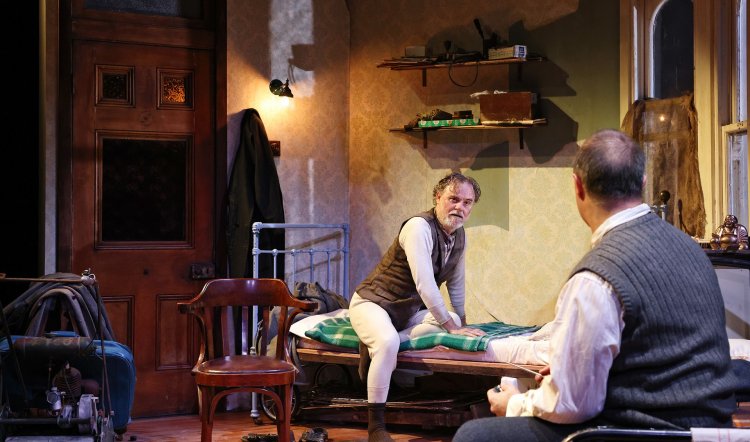 When Harold Pinter was awarded the Nobel Prize for Literature, the Academy said, “Pinter restored theatre to its basic elements: an enclosed space and unpredictable dialogue, where people are at the mercy of each other and pretence crumbles. With a minimum of plot, drama emerges from the power struggle and hide-and-seek of interlocution.”

Although not intentional, it’s a succinct description of The Caretaker, written in 1960 and an unlikely commercial success. Although London theatregoers had previously taken to Waiting for Godot (Samuel Beckett, 1953) and Look Back in Anger (John Osborne, 1954), the West End was still stultifyingly middle-class both on stage and in the stalls. And while theatre is still largely a middle-class activity, there is now a space for “the other” and an audience to fill it.

The Caretaker is set in one room of a slovenly London flat where Aston (Anthony Gooley) lives with his brother Mick (Henry Nixon). On the face of it Aston is a damaged, gentle man and therefore easily bullied into offering a bed for the night to Davies – or perhaps Jenkins (Darren Gilshenan) – he’s a dodgy geezer from the start it seems. 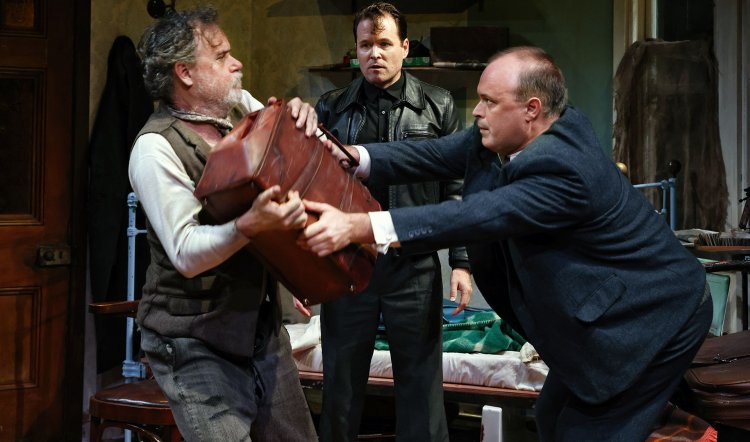 As with so much of what we have now come to call “Pinteresque” drama, much happens, little happens, what is on the surface is not the same as what lies beneath, and these two layers are frequently up-ended anyway. The ebb and flow of emotions and characteristics are disconcerting and rarely predictable. Mick is an out-and-out bully, but then so is Davies in his whining manipulation of situations. Aston is a ghost of a man and almost not present, except he is the most powerful and unnerving of the trio.

The performances are multifaceted and hold the attention as they variously inhabit the suffocating shabbiness of Veronique Benett’s set with its clutter of Aston’s collection of broken appliances which he never quite mends, the two single beds, the miserable window, and the teetering pile of newspapers (more required for maximum discomfort). Gooley’s quiet defeatism imperceptibly morphs into menace and his containment and the tense calm of his physical presence are superb. Nixon’s calculated energy as the blustering wide boy is beautifully realised because he is so unconvincing despite his own belief.

The central role of the unter-tyrant Davies is filled in every sense by Gilshenan. He is most persuasive when not strenuously engaged in being funny. Nevertheless, he has brought his entire box of comedic tricks to the party and is much appreciated by the audience. 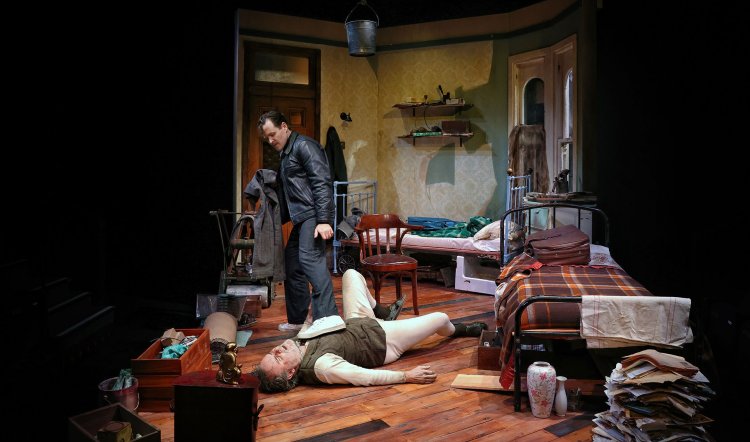 Does The Caretaker stand up to the test of time? Its last staging in Sydney was almost two decades ago and since then Pinter’s style, if not his substance, has become the norm rather than a rare shock to the subscriber class. An odd element, which could surely be dealt with, is the two fifteen-minute intervals – one would work better for the play and the audience, although not perhaps quite as much for bar revenue.

Nevertheless, it’s good to have director Iain Sinclair back in Sydney even if for just a moment. His work here is clear, concise, and in tune with the actors’ individual dynamics. Similarly, the interplay of power and powerlessness in the changing times of the play and its era are well drawn. These men are trapped – by chance – between the privation of post-war Britain and the affluence of “the Swinging 60s”. Each, in his different way, is lost.