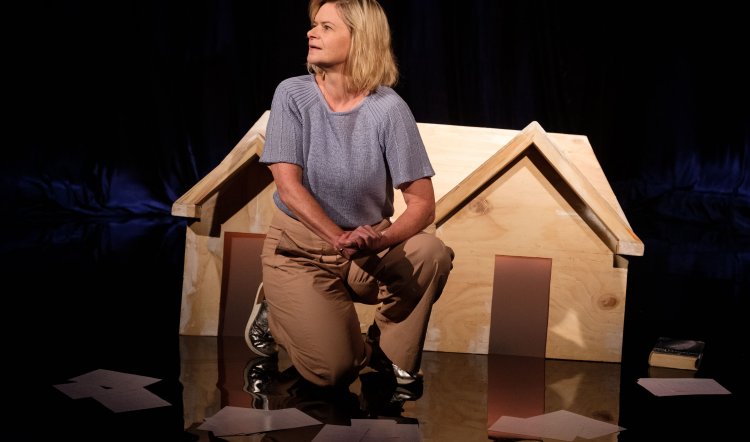 THE END OF WINTER

In the middle of a particularly humid and mainly dreary La Niña summer in Sydney, Noëlle Janaczewska’s The End of Winter is both a welcome blast of cool piquancy and 55 minutes of fascination.

The writer describes it as a “performance essay-cum-monologue” and that sums it up but doesn’t begin to convey its quirky, surreal magic. It is performed by Jane Phegan, directed by Kate Gaul and accompanied throughout by the empathic presence of a soundtrack by Nate Edmondson with Kaitlin Crocker.

The Stables stage is made darkly cavernous with a model house – ski lodge, perhaps, or an inundated home – set in the middle of a gleaming, reflective surface that could be water or infinity. A restlessly moving Phegan moves over, around and circles the small building whose blank windows glow brightly. Occasionally she perches on its roof, but mainly she prowls, wearing a secret smile and telling her story. (Set design: Soham Apte, lighting design: Becky Russell.)

The character is named as “The Lover of Winter” and the stipulation is that she should be “Female, not too young.” It quickly becomes apparent that her age is important: this is a woman who has experienced a lot, imagined a lot; known loss and pain, but retains a droll, off-centre world view. 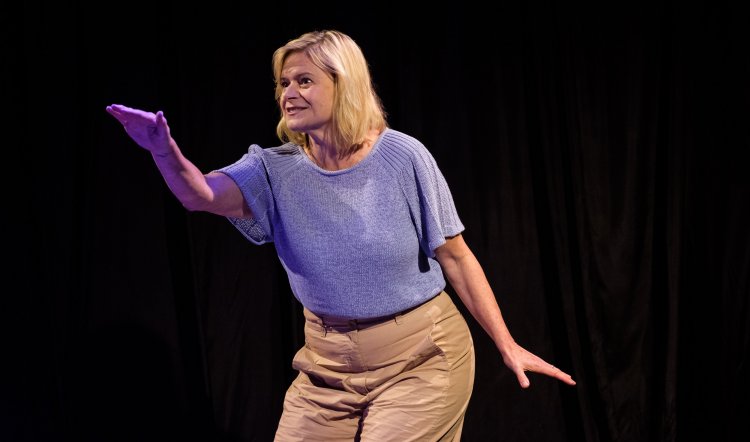 In “a story of winter written in the heat of summer” she yearns for seasons, especially the cold. No wonder, as she is in the middle of the east coast’s dreadful bushfire summer of 2019-20. She wants to go to Antarctica, to the world’s cold places, but there’s a snag: the prohibitive cost of commercial cruises and expeditions.

She has a solution and sets off into immediate disappointment: “I went to Thredbo looking for cold and poetry. / I found traffic.” Aside from being loved to death by would-be explorers and adventurers, she finds much to share about the planet’s once-remote places – The End of Winter is a squirrel’s treasury of nutty facts. Some are comic, others not so much.

For instance, in 2019 there was a funeral in Iceland – for a glacier that once spanned 38 square kilometres and is now no more. In Icelandic the word for glacier is “jökull”, the glacier had been known for millennia as Okjökull and is now simply Ok.

In wondering what will become of us, The Lover of Winter lovingly and humorously revisits the past of myth and fairy tale, the history of polar exploration, and the world’s coldest places. The largest iceberg ever recorded was named, prosaically B-15, although explorers liked to name their discoveries after the women left at home. 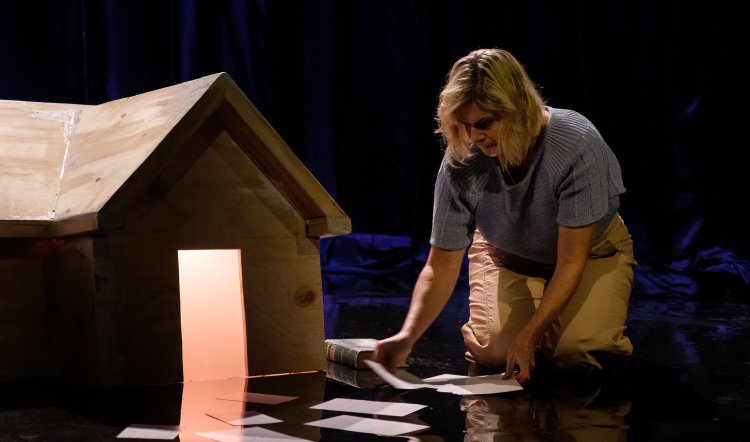 And that’s a provocative if not unexpected reminder: women weren’t welcome on exploratory expeditions: “1767, Jeanne Baret, disguised as a man, traveled in the Subantarctic as a member of Bougainville’s expedition.” If you’re now wondering whether Bougainville had anything to do with the thorny magenta-leafed plant that enlivens so many gardens: sort of; obliquely.

French botanist Philibert Commerson first came across it in Brazil and rather than burden it with either of his own homespun names, gave it that of his good friend Louis de B instead. (This has virtually nothing to do with The End of Winter, by the way, although its flights of fancy and soaring diversions do encourage the same in an audient.)

The “performance essay-cum-monologue” is beautifully realised by Jane Phegan. Her clear-eyed calm and gentle humour undercut the ferocious messages and discoveries revealed in less than an hour of intense and engrossing mind travel. The End of Winter is often enlightening, often sobering, and occasionally laugh-out-loud funny. Recommended.