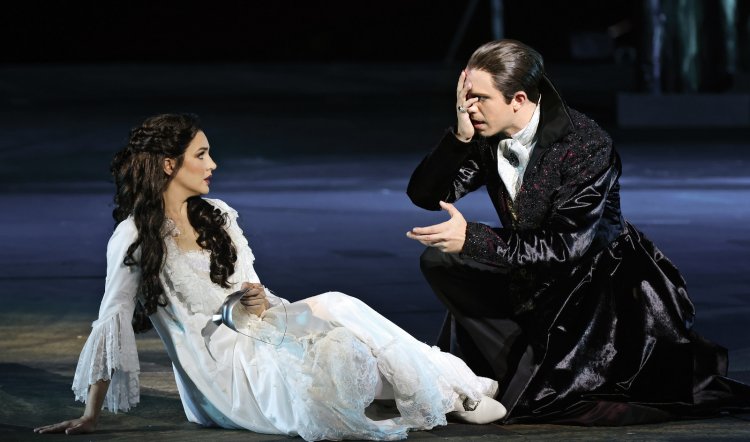 THE PHANTOM OF THE OPERA, Opera Australia’s Handa Opera on Sydney Harbour, 26 March-24 April 2022. Photography: above: Georgina Hopson and Joshua Robson; below: the stairs; below again: Kelsi Boyden and Maree Johnson

When Phantom opened spectacularly at the Princess Theatre, Melbourne in the winter of 1991, it was already a phenomenon a few years out from its London debut. Now, it’s the longest-running show in Broadway history and a refurbished reboot will open, direct from the West End, in the Joan Sutherland Opera Theatre later this year.

So what on earth could be offered on the vast open-air pontoon to rival that? A lot, as it turns out. First, director Simon Phillips and designer Gabriela Tylesova have worked together often on shows ranging from the first, Opera Australia’s 2001 The Elixir of Love, through to Muriel’s Wedding for Sydney Theatre Company. In all, the visual element has always been indelible. And so it is for this Phantom.

Tylesova’s set accomplishes the feat of making an enormous stage into intimate spaces while also fighting off the most overbearing backdrop in the world: the harbour with the opera house, city skyline and bridge all competing for attention. Drawing, perhaps, on her Bohemian childhood, Tylesova’s Parisian opera house and its denizens are a dazzle of Rococo extravagance (Nick Schlieper’s lighting is integral to its effectiveness).

The stage is defined by a towering broken proscenium arch with scarlet-draped boxes on one side, while the arch’s curve is echoed to stage level by a sweeping staircase. The circular motif continues with further swirls of walkways reaching back to the arch. And all manner of surprises emanates from it. It’s spectacular, inventive and madly, hilariously right. And along with endless sumptuous costumes, as camp as a row of tents – all of that and more. 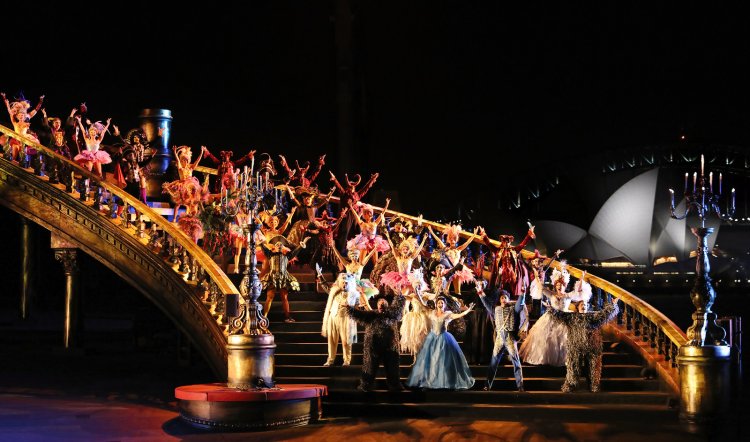 Simon Phillips has a way with the grand and crazy, as well as the tiny details of individual performances and his sense of humour is ever-present and delightful. The cast is clearly in tune with the director, as is choreographer Simone Sault. She brings to the corps de ballet not only stellar dancing but also, with the tireless chorus, the essential lightness of the absurd.

The creative team is vital to the Handa endeavour and crucial to its success is the sound. The orchestra is secreted beneath the stage and each singer is mic-ed and following conductor Guy Simpson on monitors, yet the sound of the Handa series – from 2012 – has been amazing. This sound design, by Shelly Lee, operated by a team of eight under Head of Sound Emily Adams, gives us audio quality that is almost miraculous.

Taking advantage of the technical excellence, first mention has to be of Joshua Robson’s Phantom – the vengeful “ghost” whose obsession with young singer Christine causes murder and mayhem, and for whom the term “coercive control” might have been coined. Charismatic Robson has a voice that equals the thundering pipe organ, while tenderly heart-rending when he finally realises he cannot win.

As Christine, Georgina Hopson is blessed with an agile soprano voice and is also credible on the emotional seesaw of harassment, fear, courage and compassion. Her lover Raoul (Callum Francis) is given physical wit by Tylesova’s pale blue hussar’s uniform – both effete and masculine – and contributes an energetic performance. 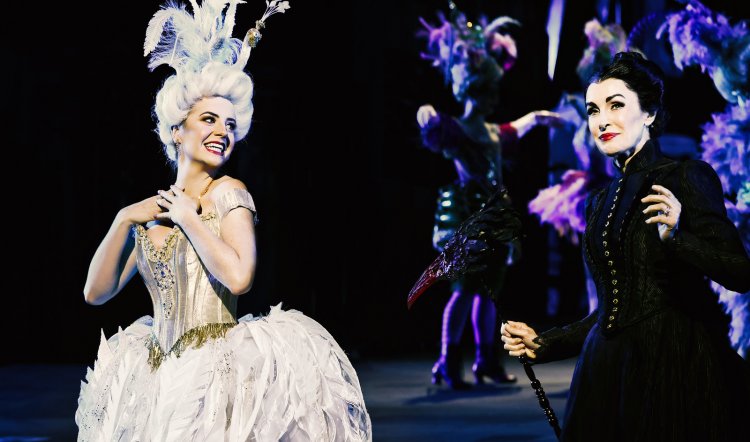 The supporting cast is splendid: Maree Johnson is a ramrod-stern presence and rich voice as ballet mistress Madame Giry. Martin Crewes and Michael Cormick are comic and musical standouts as the hapless theatre owners, while Naomi Johns and Paul Tabone are their even funnier leading soprano and tenor. And in her few moments, Kelsi Boyden as Christine’s friend grabs them and shines.

The OA Orchestra and Chorus are excellent in what have to be the most trying conditions anywhere, including cruel La Niña and her unpredictable rain – meaning barely a run-through before opening night. However, on the night it was an artistic and technical triumph – in the gobsmacked presence of creator Andrew Lloyd Webber!

Pack your poncho, wear sensible shoes and enjoy what is arguably the best Handa of all. Altogether a marvellous night out.