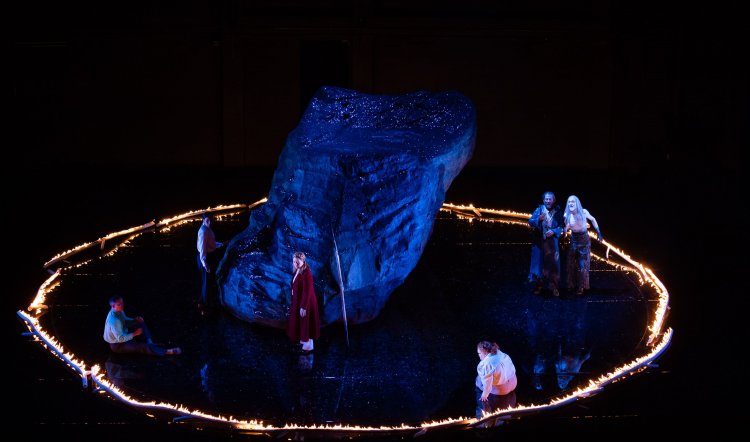 THE TEMPEST, Sydney Theatre Company at the Roslyn Packer Theatre, 15 November-17 December 2022. Photography by Daniel Boud; above - the company; below Peter Carroll and Richard Roxburgh; below again: Guy Simon

After such dazzlements as Suddenly Last Summer, Dorian Gray, Arturo Ui, and Jekyll & Hyde, it’s startling to have a Kip Williams production open with not a screen in sight. Although the “island” on which this Tempest is set is a large revolve with a high-sheen surface wherein there are glimmers of reflection – particularly of the enormous boulder which is the stage’s only adornment.

The set (Jacob Nash) is not the only way in which this staging is a conventional one (not a criticism, by the way). Naturally, the action opens with a storm, so there is thunder and lightning, and mist. As well as lightning, the lighting (Nick Schlieper) gives a lot of gloom shot through with washes of illumination. The mood music (Stefan Gregory) is similarly orthodox, yet effective. Likewise, Prospero carries a staff whose sharp end occasionally bursts into flame, and late in the piece, slender white tree trunks are laid around the revolve, and they also erratically flicker into flame, providing the best optics of the evening.

In other words, despite the sound and fury and constant comings and goings, and the star casting of Richard Roxburgh as Prospero, this Tempest is oddly dull. So much so that I found myself thinking fondly of Roxburgh’s main-stage debut in 1986 at Belvoir when he played the beautiful Cockney bovver boy - glottal stops and aggro – in On Parliament Hill. He was all fire and magnetism, some of which would have improved this ennui-stricken Prospero no end.

Piquantly, On Parliament Hill’s author, the late Noel Greig, said the play’s central theme was: “Men kill each other because they do not know how to love each other.” It could also describe The Tempest – on a good day. In classic Shakespearean fashion, duke Prospero is usurped and exiled by his ruthless brother Alonso (Mandy McElhinney). Prospero being a cis white male of high status thinks nothing of taking over the island from its traditional owner Caliban (Guy Simon). He’s referred to as “monster” and is a despised outcast. 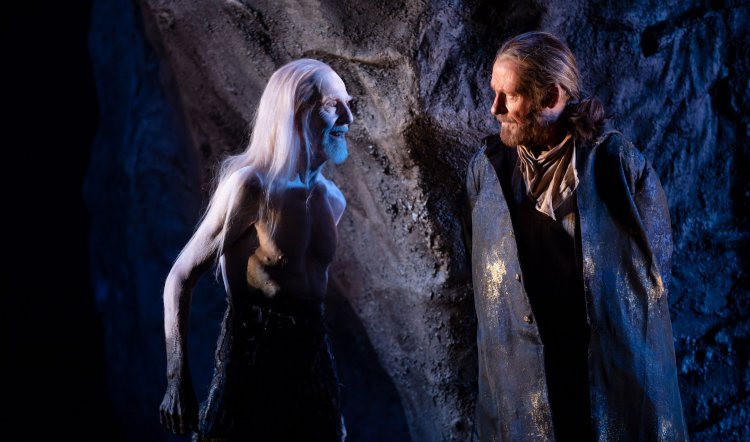 Simon is a Biripi-Worimi man so his casting as the social pariah obviously has political and racial intentions, much underlined by references in the text. The effect is neither as shocking nor as effective as when Neil Armfield cast Murramarang-Walbunga man, the late uncle Kevin Smith in the role in 1995. His ethnicity was signified by one masterstroke of costuming (the late Jennie Tate). She gave him a replica of Bennelong’s English military coat – ratty red worsted, tarnished gold frogging, and epaulets. Nothing more was said or done to invoke racism, colonialism, and the Empire’s history.

You’re probably getting the idea that there was some tedium in which to ponder the above. Not that comparison or “I wish…” are the point, but if one is adrift during what should be a taut and otherwise energetic two hours, something is amiss.

And while on the subject of drifting, the casting is peculiar too. Claude Scott-Mitchell’s Miranda and Shiv Palekar as her beau Ferdinand are conventionally male and female and reasonably cute. On the other hand, the rest of the chaps are played to confusing and ultimately pointless effect as themselves by McElhinney, Chantelle Jamieson (Sebastian), Megan Wilding (Gonzalo), and Susie Youssef (Trinculo); while Stefano (Aaron Tsindos) and Antonio (Jason Chong) are equally inexplicably male.

Post-shipwreck – when Alonso and his crew fetch up on the island and fall foul of Prospero’s trickery – Caliban subplottingly takes up with Stefano and Trinculo and a bottle of booze. Some fun is had here, but not as much as when Wilding’s whingey Gonzalo is involved and not as much again as when Ariel is ordered into the fray by Prospero. 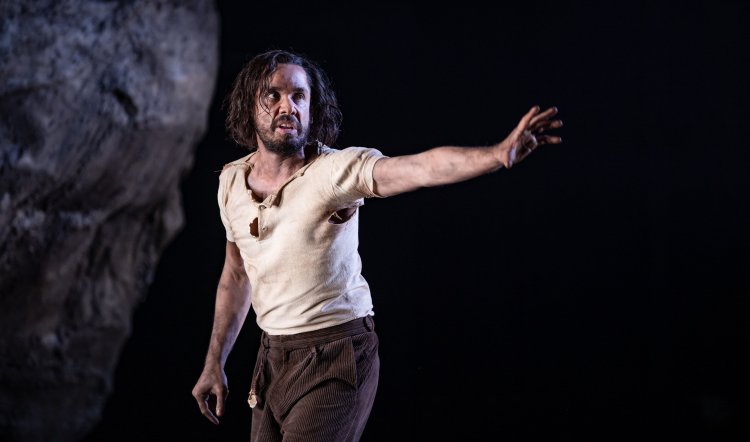 The spirit-slave is a clever bit of casting: Peter Carroll makes no secret of the fact that he’s as old as God – but a lot more nimble and way more fun. His Ariel is more sprightly than a sprite and embodies ethereal mischief with silvery long hair, bare, pale torso and satyr-like trousers and hands (costumes Elizabeth Gadsby). When not tormenting the humans, Ariel mostly complains to Prospero that he has promised to set him free but, as yet, has not.

Naturally, as it’s the Bard, all’s well that ends well; everyone goes home, the rightful duke included. True love wins out – atop the boulder beneath a gentle sun shower – and Caliban is left to his island home. Yet in the end, it’s much ado about nothing. Odd, unsatisfying, disappointing.