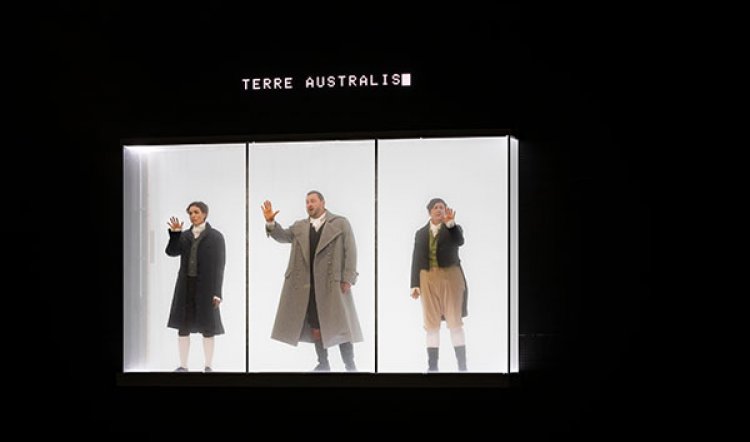 A festival needs at least one show that captivates and stretches the imagination and stirs the blood and brain; that confounds and thrills its audience and takes us to places we’ve not been before. They are rare and sought after. This Sydney Festival has such a work in composer Mary Finsterer and librettist Tom Wright’s chamber opera Antarctica.

The work was first performed at the Holland Festival in Amsterdam, in June last year. It was a triumph, applauded by audiences and critics alike – all dazzled by the collaboration between the pre-eminent Dutch new music ensemble, Asko|Schönberg that commissioned the work, and the visiting Australians, Sydney Chamber Opera. Now it’s our turn.

Occupying the spacious but not cavernous Bay 17, the audience sits on sharply-raked bleachers that give a clear view of the orchestra. The 14 musicians are arranged – grand piano and harp to the left, vast and varied percussion set-up to the right, with strings, woodwinds, and brass in between, and conductor Jack Symonds in their centre.

Beyond them is Elizabeth Gadsby’s set of a shallow white stage backed by a towering 9m flat of video panels in which are inset two rectangular boxes. One small and vertical, high up to the left. The other large, horizontal, centrally placed and where the singers appear – otherworldly and suspended in soft-focused light – then disappear in swirling mist, perhaps snow. Digitised text also appears on the wall from time to time: more or less, always intriguing. And always the suggestion of bright white-blue light and endless darkness and the southern continent through Alexander Berlage’s inventively integrated lighting design.

Mention must also be made of Bob Scott's impeccable, astonishing sound design: singers behind perspex, instruments variously wired for sound, and, at times, digitised overlays of effects and the voices being projected from different parts of the auditorium. Amazing.

Narrative is not really the point in Antarctica. Wright’s libretto is often poetic, sometimes sharply witty and insightful, sometimes obtuse as a gale-driven whiteout. Dramatic plot or easy meaning are notably absent, rather the characters – Enlightenment archetypes – are named for their discrete areas of expertise and meaning: The Captain (Simon Lobelson), The Theologian (Jessica O’Donoghue), The Cartographer (Michael Petruccelli),  The Natural Philosopher (Anna Fraser) and The Daughter (Jane Sheldon). These ravishing voices – solo and in trios and quartets – are spectacularly beautiful and deliver the complex music and often opaque text with exemplary clarity. 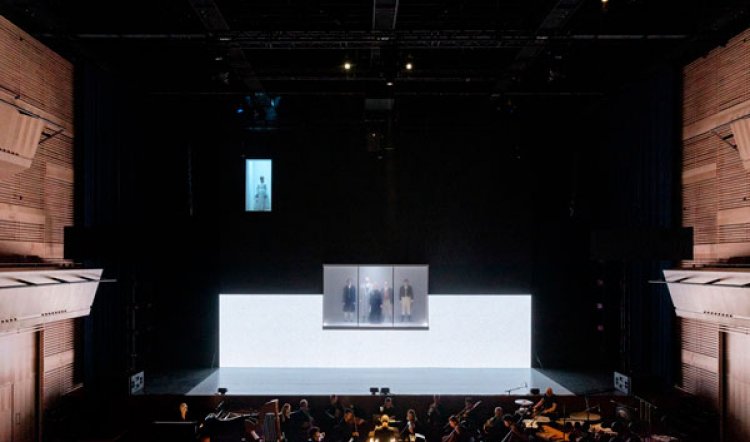 As the work progresses we gradually discover the lack of light in the Enlightenment through the stultifying dogma and severe rectitude that were its everyday companions. Little is as it seems: a  map of the great southern land turns out to have been drawn by the cartographer in order to entice participants to his voyage. It’s an acidly contemporary thought to suck upon. Throughout, a small lone girl (Hayden Holmes, also The Daughter) observes and endures. The poignancy of her humanity is hard to overstate.

Antarctica is overwhelmingly about the music, however, with its washes of colour and temperature emanating from celesta and harp. The movement of ice rasps and creaks from gongs and viola d’amore, cello, and bass. The organic integration of electronics and digital imagery creates repeated and constant feasts for eyes and ears for the hour and 40 minutes of the piece.

Antarctica is an achievement of extraordinary beauty. An epic in physical miniature but not in ambition. Mary Finsterer should be encouraged to do next whatever she fancies. Meanwhile, we’ll wait and anticipate. And hurry to Carriageworks for the final performances of this production. Recommended without reservation.