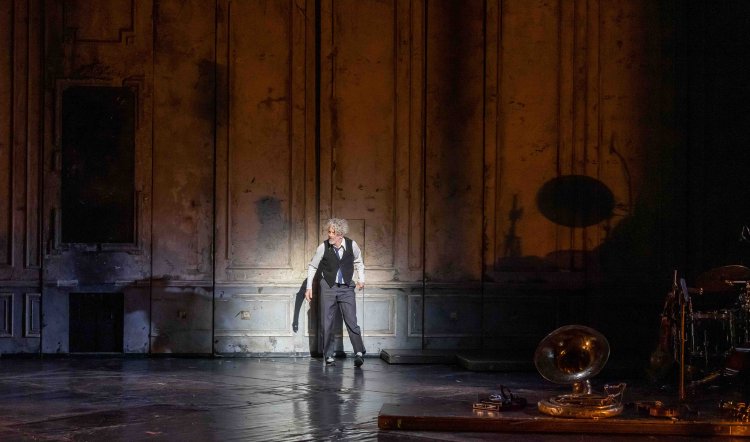 It’s twenty years since James Thierrée first enchanted Sydney Festival-goers with The Junebug Symphony. He’s been back since so this latest show, with his Compagnie du Hanneton, has been one of the most keenly-anticipated events of the 2023 Festival. But quel dommage, it’s a disappointment.

Pourquoi? That’s actually a question of the auteur bellowed over and over by one increasingly frustrated performer. “Because,” answers Thierrée, airily. And that, in exquisite brevity, is exactly how one should approach Room.

In an interview in the Sydney Morning Herald, Thierrée said:

“The show is absurd; there's no story, there's no meaning or message. It's a journey … Dreams. Nightmares. It's about using circus, pantomime, music and dance to create a language, a very simple and direct contact with the audience.

“I don't intellectualise what I do. People come after the show and tell me what they've seen and I have no idea what they're talking about. It provokes thoughts, but it doesn’t impose thoughts.”

Thing is, that interview was published 20 years ago and Thierrée was talking about Junebug – not Room – although he could have been as the description and raison d’être are virtually identical. Except that the former was a taut blink-and-you’ll-miss-it 90 minutes, while the latter is an hour and 45 minutes and feels somewhere on the wrong side of interminable.

Although conceived before worldwide Covid incarcerations, Room could easily describe the mind and temper of someone who’s experienced that unique blend of isolation and the unknown. The show opens on a stage littered with bits and pieces of scenery. There are sections of flooring, a lot of tall flats lie or are propped here and there; there’s a table lamp, a cello, a piano, a draughtsman’s table, and otherwise the cavernous backstage of the Ros looms darkly large.

To begin, Thierrée does some of his mime and movement schtick and is joined fleetingly or otherwise by members of the company. The flats are on wheels and are raised, arranged and rearranged and revealed as the once-elegant wall panels most often seen in Age of Enlightenment opera settings or the homes of down-on-their-luck Parisian haute bourgeois.

Music plays a major part in the goings-on with the performers turning out to be not only fine singers but also multi-instrumentalists and skilled dancers or acrobats. In keeping with the currently popular (again) tag of auteur, Thierrée designed the set, co-designed the lighting, and composed the music, as well as devised and directed the piece. A co-director might have been a good idea. Someone who could have taken the Delete button to the frequent longueurs would have made more of the brilliant moments. 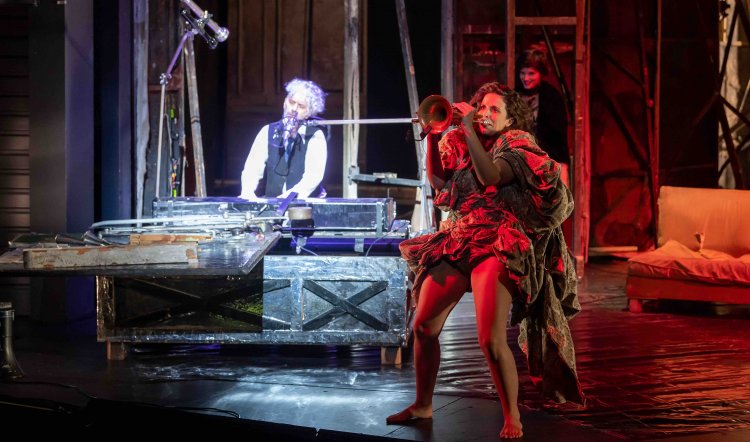 Elsewhere, although the music and lyrics range across genres and time, the words are often indistinct and puzzling. When coupled with portentously-mumbled dialogue the overall effect is deadening. This is not helped by tooth-achingly frequent repetition. The auteur would have done well to remember the classic rule of three, or the comic triple, instead of repeating already threadbare gags until they’re entirely worn out. Cutting repetition to three max, instead of five or six or more would also have trimmed 20 minutes and, again, made more of the good bits.

That aside, the show is disconcertingly ill-humoured. The auteur yells and grumps about, is autocratic and overbearing in a way that would have HR mavens fainting in the aisles, and this whack-‘em-over-the-head-with-a-mallet approach is also taken up by various members of the cast. Consequently, the overall effect is exhausting and unpleasant, and that’s without mentioning the three women in the audience who cackled like demented hens at anything even mildly funny. Avant garde? Non.

And that’s the thing: 20 years ago Thierrée’s routines and ideas were, if not cutting edge, at least fresh and amusing. Now, there is a sense of not reading the room, or of being out of new concepts. It might pass as cute, old fashioned and French – sort of derriere garde – and for that reason alone, I’d have to ask: “Pourquoi?”