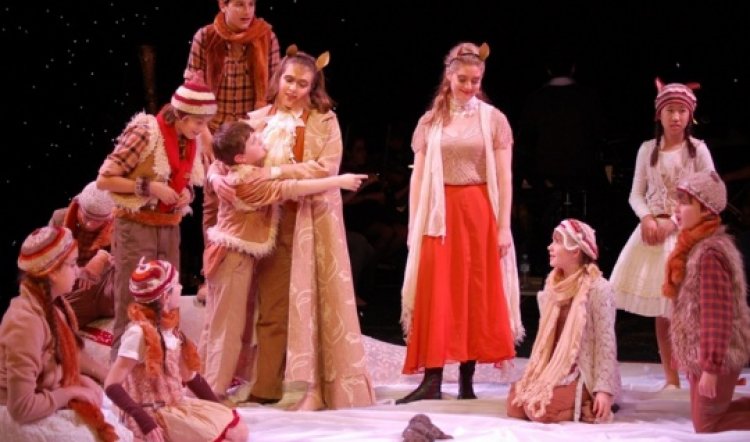 Sydney Chamber Opera’s second production after last year’s Notes From Underground, and it underlines co-founder and artistic director Louis Garrick’s observation in an SMH interview when he said, “Opera, more than any other performing art, really does need some freshening up.” To achieve that SCO has smartly brought in acclaimed theatre adventurer Kate Gaul to direct the modernist Janacek fable; and if this production were much fresher it would leap right off the stage.

The Cunning Little Vixen is a challenge for any company and SCO’s approach is a winner. Musically and dramatically it’s as sophisticated as the composer demands and for the audience, it is charming, clear-eyed and entertaining. The company of young singers (mainly students and recent graduates of The Con, none over 30) is exceptionally fine and the 16-piece orchestra, under the baton of Jack Symonds, is beautifully balanced.

CarriageWorks’ Bay 20 turns out to be a terrific space for this kind of musical work, aurally and visually; the orchestra occupies the rear part of the performing area. The singers enter and leave to the left and right behind the musicians; but mainly they stand and watch what’s going on from either side of the space which, in the first half, is also occupied by lots of plain wooden chairs that are used as many things, but not for much sitting. The “stage” is defined through light pools (Luis Pampolha) and the setting is a simple, stylized clearing in a forest represented by what looks like a painted floor canvas. This is the first solo professional job out of NIDA for costume and set designer Hanna Sandgren and she’s definitely a name to watch. She’s previously assisted Gabriela Tylesova on Love Never Dies and Renee Mulder on Edward Gant’s Amazing Feats of Loneliness and her imaginative and witty costumes for the Vixen suggest she’s learned a lot already.

Julie Goodwin leads the singers as the Vixen and her background in opera and musicals means that acting and singing are a natural mix: she’s foxy in the furriest way and manages Janacek’s demanding music with deceptive ease. The same can be said of the rest of the principals, Bryony Dwyer as Fox, Gamekeeper Alexander Knight; the Schoolmaster, Simon Gilkes, Parson Ashley Giles and the randy Dog Anna Dowsley. Of the children, Dominic Grimshaw is a hoppy and winsome Young Frog. There is also some excellent chicken work from Dwyer, Maria Hemphill, Marisa Panzarin, Agnes Sarkis and Amanda Stephens-Lee. These uppity birds totally deserve the comeuppance that comes their way from the Vixen.

The cute factor – which make the production a good one for children and newcomers to opera – isn’t allowed to smother the darker elements of Janacek’s spiky folk tale, however. Director Kate Gaul choreographs the company with precision and purpose so that the cycle of Nature is uppermost – birth and death, love and loss, time and tide. The Vixen is cunning and so is this production. Recommended.