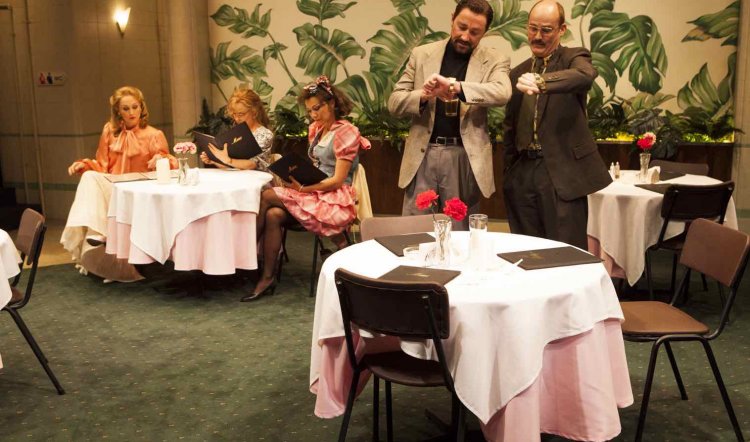 In Melbourne in 1988 a 21-year-old Andrew Bovell sat beside his father, visiting from Adelaide, for the opening night of his first play, After Dinner. His father’s reaction to this bleakly funny and shockingly truthful comedy of sexual misery and ineptitude is the subject of a lovely essay by the playwright in the program. It’s typical of the writer: keenly observed and wry. It was part of his keynote address to the 2014 National Play Festival - find it in full at sydneytheatre.com.au/bovell.

Meanwhile, close to three decades on, to celebrate the 30th birthday of the Wharf Theatre complex, the STC opens its 2015 season with a fine production of After Dinner.  Bovell is now one of Australia’s most admired and popular writers for stage and screen (Speaking in Tongues, When The Rain Stops Falling, Lantana, The Secret River) and revisiting his precocious writing youth turns out to be both rewarding and fascinating.

After Dinner is set in a pub bistro where the 6 o’clock swill tiling has only recently given way to a sad mural of monstera deliciosa and the kind of lighting that makes everyone look criminal (set design and fabulously awful period costumes by Alicia Clements. Fabulously awful lighting by Verity Hampson). Office friends and desperate singletons Dympie (Rebecca Massey) and Paula (Anita Hegh) arrive for their tragically regular Friday night out. This evening they’re going to be joined by another colleague, the recently widowed Monika (Helen Thomson) (hubby died of a stroke at just 38 while watching telly as she was in the kitchen doing the washing up).

The set-up of the opening scenes is excruciatingly accurate as passively aggressive Dympie determinedly picks the worst table in the eatery. And Paula feebly but angrily fails to get her to move to one where they can more easily see the band - promised for later - and also where they might catch the eye of a waiter and not right next to the toilets.

By the time Monika arrives - late - the dynamics between Dympie and Paula have been vividly drawn and can only become more acute as each jostles for position and each tries to accommodate the presumably tender sensibilities of the widow. In a glorious “don’t mention the war” exchange, ditzy Paula stomps all over Dympie’s insistence that they should not raise the untimely death. In a delicious twist of character and plot, this opens the door for Monika to reveal the hilariously awful truth about her widowed state.

“Hilariously awful” is pretty much what happens thereafter, particularly when it comes to Helen Thomson’s gift for unselfconscious total immersion comedy. She is ably and strongly partnered in her endeavours by Rebecca Massey and Anita Hegh. The latter has the tough task of being something close to the straight (wo)man to the other two and she reveals a comedic talent that makes the exchanges between the trio sharply entertaining.

At the next table, meanwhile, is Gordon (Glenn Hazeldine). He’s unwillingly divorced and patiently waiting on his office mates, of whom only Stephen (Josh McConville) turns up. While Gordon is ostensibly the Sad Sack, it’s not long before Stephen’s own underside is revealed: the smirking root rat is anything but. And, like Anita Hegh, McConville demonstrates that he knows the value of restraint and generosity in often being the foil for the others’ antics and is the funnier for it.

Having done the hard yards in securing the very best cast, director Imara Savage slyly kicks off her production with Frankie Goes to Hollywood’s Relax booming from the PA. The lyrics are a wicked clarion call to the five desperates: “Relax, don’t do it / When you want to go to it / Relax, don’t do it / When you want to come.” If any had paid heed to that advice... but the outcomes are both inevitable and surprising. That there’ll be bad white girl dancing and tears before bedtime is a given.

While it’s possible that the mature and experienced Bovell might have been tempted to tinker with a play that’s remarkably good but is also the work of a very new writer, that temptation was resisted and After Dinner stands up well all on its own. The sheer excellence of characterisation and observation means that because it’s about eternal human relations (as well as arguments about who ate all the garlic bread and therefore should pay for it) the play hasn’t aged a day.

It was fun to hear how the women in the audience groaned and laughed at the true confessions spewing from the female characters, while corresponding revelations by Stephen and Gordon were greeted by the males in the audience with the unmistakable silence of clutched thighs protecting crotches. The more things change, the more they stay the same.

After Dinner is a deceptively light comedy that packs a powerful and lingering emotional punch. Not surprising then that after that first successful opening night in 1988, Bovell’s father turned to him and said, “I suppose this means you won’t be coming home.”