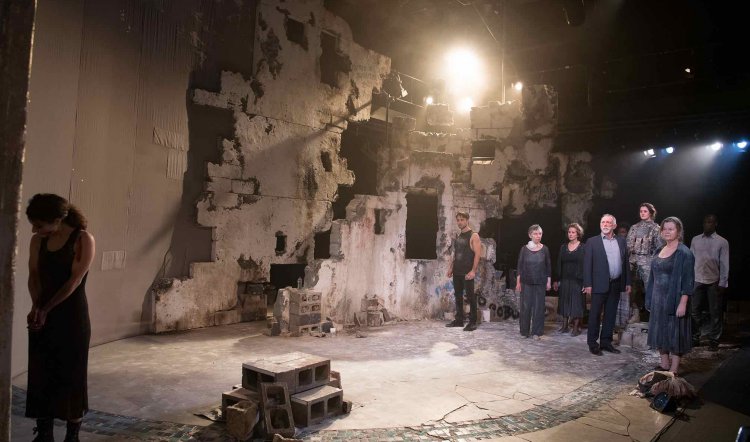 ANTIGONE, Sport for Jove at the Seymour Centre, 6 October-12 November 2016. Photography by Marnya Rothe: above the company; right: Deborah Galanos

There are directors and adapters of elderly texts who happily throw out the baby with the bathwater in their quest for “relevance”, and then there’s Damien Ryan. He has taken Sophocles’ Antigone and, with sensitivity and skill, brought it whole and unharmed and germane into the now of 2016.

And this “now” is almost tangible in the intimate space of the Reginald theatre. It’s impossible to forget that beyond its walls we are surrounded in the world by demagoguery, crumbling democracies, outright villainy and the indelible and daily images of middle-eastern conflict and in particular, Aleppo, as well as other manifestations of what passes for daily life in the 21st century.

Somehow these thoughts and the feelings they evoke hang in the hot white air with the dust and smoke of a ruined city. (Remarkable set and lighting by Melanie Liertz and Matt Cox, respectively.) This is a place where fear and uncertainty are as much part of life as the broken buildings and shattered society.

This is reality and there’s not a TV in sight – nor any of the essentials of modern life: internet, phones, radio, electricity are all gone. They are replaced by rumour, old news and the barest necessities. Suddenly it becomes apparent how little would need to change to take us right back to Thebes and the immediate aftermath of its deadly civil war.

In Ryan’s ancient Greece-now (he co-directed with Terry Karabelas) the king, Creon (William Zappa), comes to what used to be the centre of town in the hope of telling everyone what’s going on. The rebels have been defeated he says, but there is little joy in it, as is most often the case in civil war (the most uncivil of all, in truth). Death has visited most citizens’ families, their lives are in ruins.

One of the more devastated citizens is the princess Antigone (Andrea Demetriades) who must be forced to see her brother’s body be destroyed by the sun and scavengers where he lies outside the city. His uncle Creon has decreed that he will not be buried because, although a member of the royal household, he had become a terrorist.

It’s an old conundrum: one woman’s freedom fighter is another’s terrorist. So, as warning and punishment, young Polynikes must bloat and rot and his sister will not be afforded the comfort of burying him. Anyone who aids a terrorist, says Creon, will suffer the same fate.

Already however, Antigone has begged for the help of her more laid back sister Ismene (Louise Mignone) to carry out the now illegal act. Ismene will not and Antigone will not be dissuaded. The forward momentum towards what must inevitably happen begins.

Because this happened two and a half thousand years ago in ancient Greece, there is a Chorus on hand to witness and to give voice to the responses that must be in the hearts and throats of all watching on. Led by Fiona Press as a clear-eyed and implacable survivor, they punctuate and serve the action and are... 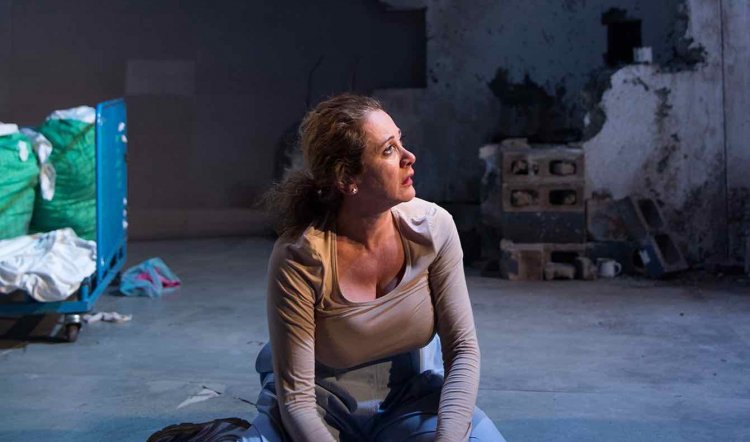 Anna Volska who also doubles as the blind Tiresias, whose sardonic yet serene interjections belie her apparent inability to see what’s really going on. Janine Watson also appears as The Sentry and her comic, quick-fire cameo is a scene-stealing highlight.

Also a magnetic presence in this high-powered company is Deborah Galanos whose late-in-the-action role as Creon’s wife Eurydice is compelling for being instantly recognisable: a trauma surgeon dealing with the wreckage of bodies and her hospital. Often it’s impossible to tell the difference.

The comedy is a startling – and the most modern – intervention in the ancient text. Andrea Demetriades, in the most dreadful of circumstances, is still given licence to find the humour that lurks in her plight. She wrenches hearts and provokes laughter by turn, as does Louise Mignone. They are an astute and effective pairing.

As Antigone’s love and Creon’s son Haemon, Jospeh De Re is effortlessly charming and princely, thus making his destiny all the more tragic. A visually and culturally interesting decision is to cast a smaller (Marie Kamara) and a taller (Elijah Williams) actor as the war orphan-harbinger The Boy. Their presence – seemingly peripheral – is actually central and full of foreboding.

The sense of apprehension and the stench of danger are further heightened by a score played in a gloomy cavern in the ruins on various percussion instruments by Thomas Royce-Hampton. Gun shots, thunder, the rumble of artillery, the sighing of ghosts: the range and effects are electric.

And then there’s William Zappa. His Creon is a man whose ascension to power is accompanied by the birth of democracy. His intentions may be noble, his love for the people and his family may be almost tangible. And yet...his thinking and attitude shift, as seems inevitable in leaders. When thwarted by Antigone in his stand on the fate of the traitor he cannot find mercy in his heart. He must be obeyed so that order (and he) may be upheld and Thebes rise from the ruins. In other words, democracy will happen – tomorrow.

All of this – his pride, his anguish, his anger, his pity and love and finally, his broken-hearted despair – are made real and devastating before us by this fine actor. It’s a glorious performance. And democracy? It would still be a good idea; maybe tomorrow. Meanwhile, this is marvellous entertainment from one of our finest directors and a terrific company. Do not miss.