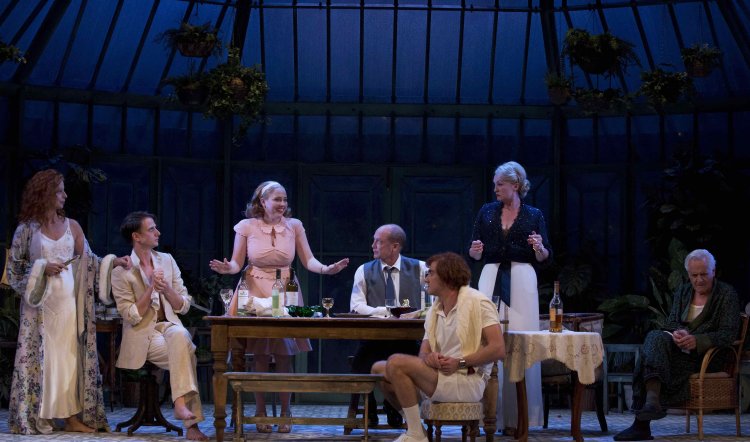 Like all the best froth and bubble, Hay Fever has an invisible base in something deeper and darker. Whether that foundation proves to be solid and able to be built upon depends pretty much on two things: the actress playing “retired” actress Judith Bliss, and a director who understands and can navigate the perils of the bear trap otherwise known as comedy.

In this instance, Judith Bliss is brought to febrile and hilarious life by Heather Mitchell and the production is constructed, moment by intricate moment, by Imara Savage. Between them – and the rest of the fine cast – they achieve that rare and delicious thing: light-as-air comedic meringue with the vital chewy centre.

Noel Coward was busy being a wildly successful 25-year-old when he added to his reputation with Hay Fever. It was a wicked portrait of a ghastly family and it was inspired by a couple he’d met on a visit to the United States. It is seen, nevertheless, as a quintessentially English piece and is played as such in the STC’s new production.

Judith Bliss (Mitchell) is a famous actress whose retirement from the stage is playing havoc with her ego and sense of self. She is lost without an audience and a part to play, so she spends her time acting out her daily life in more or less melodramatic terms. Husband David (Tony Llewellyn-Jones) is a successful novelist, rarely seen but always felt as an exasperated presence in the library.

The Blisses have two children – the word is used advisedly – pouty Sorel (Harriet Dyer) and even poutier Simon (Tom Conroy). Both are just jolly well fed up at being swamped by ennui and pointlessness. They bicker.

The family has a housekeeper of sorts – Clara, actually Judith’s dresser without whom she cannot live. You can see why as the factotum (Genevieve Lemon) channels Miriam Margolyes at her most Dickensian and is playing a part as enthusiastically as her mistress.

Into this benignly toxic mix stumble their unwitting weekend guests. Unwitting because none of the four Blisses have bothered to tell each other or Clara of the invitations issued. Each believes his or her guest will comfortably occupy “the Japanese room”. 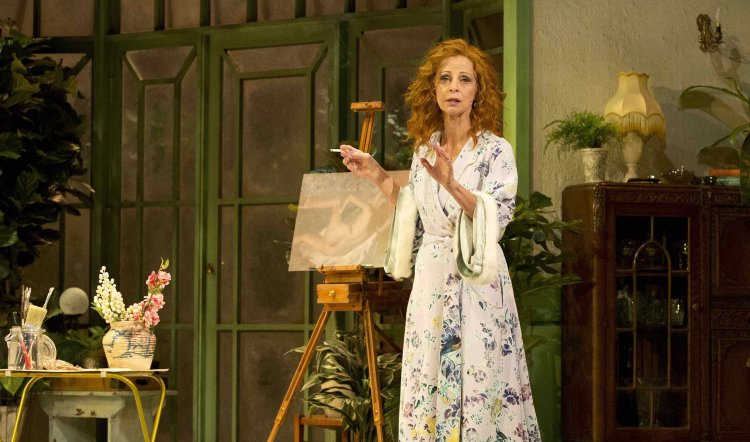 Coward put these simple if unlikely ingredients in a pot and gave them a mighty stir. The result was an enduring classic comedy of bad manners and deceptive nonsense. Each of the actors delivers intelligent, nuanced performances in the manner of their chosen frightfully British archetype.

They’re assisted in the task by Chairman Gradwell – brilliant voice and text coach – and by the most disparate selection of costumes ever dragged out of a dress-up box. Svelte Myra looks like Joan Crawford in her heyday, Sandy arrives in tennis whites, Judith is soignée in satin, Richard is diplomatically besuited – and so on. And they occupy a spacious conservatory-style living room that has the self-conscious down-at-heel hippy rattiness only the rich can and do get away with (designer Alicia Clements).

The only one among the original and quirky production choices that jars – and very badly – is the use of Amy Winehouse’s Back to Black as pre-show music and then as Judith’s moment of entertaining Richard at the piano. It seems heedlessly cruel as these two women – Winehouse and Mitchell – are made foolish by the latter’s drag-style lip-synch act and the use of the song.

Amy Winehouse was as much a genius as Noel Coward and doesn’t deserve to be the butt of such a cheap, silly joke. Mitchell likewise, her impeccable performance shattered in those three minutes for no apparent reason. Really bad idea.

That lapse aside, this Hay Fever is a glorious gathering of fine actors doing their brilliant best in service of one of the most deceptive and entertaining plays of the 20th century. It ought to make one teddibly teddibly heppeh.