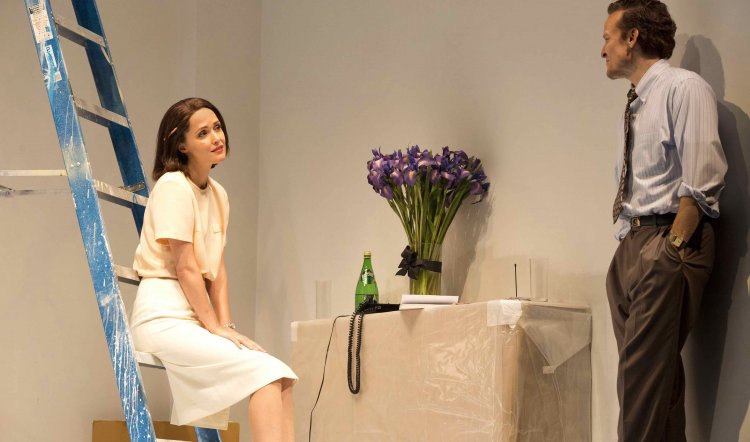 in the New York Times in 1993, in an article titled “Mamet’s Women”, David Richards wrote, “...talking about Mr. Mamet’s women is a bit like talking about Renoir’s men. They have always been a secondary part of the vision...”

The playwright himself said, around the same time, “Women have, in men’s minds, such a low place on the social ladder in this country that it’s useless to define yourself in terms of a woman. What men need is men’s approval.”

Although Mamet wasn’t referring directly to Speed-the-Plow, he could have been. This famous play from 1988 is a three-hander where an office temp – Karen (Rose Byrne) – is literally and figuratively absent for much of the 90 minutes while two movie honchos, Bobby Gould (Damon Herriman) and Charlie Fox (Lachy Hulme) joust and  josh and bet on whether Gould will get to fuck her that night. And it is that crude – and cruder – because whether or not they’re in the actual locker room, that’s how guys talked, and of course, from the President-elect pussy grabber down, we know they still do.

Mamet’s absent or marginalised woman – from Sexual Perversity in Chicago through American Buffalo or Glengarry Glen Ross – has long been the focus of foyer argument and academic debate. In essence, however, he has a famously jaundiced view of American men and you’d give a quid to know what his reaction is right now, post November 8. (Theatres in Sydney are reporting subdued and laughter-free auditoria this week.) 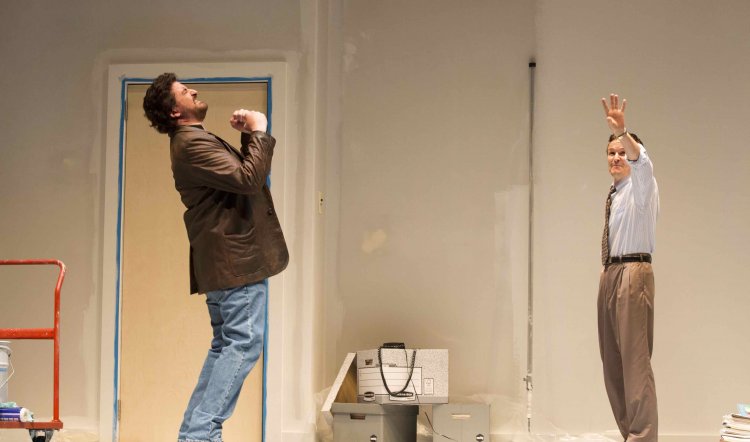 As it is, Speed-the-Plow feels extra uncomfortable at the moment – and in this production – as its cynicism appears to have spilled over into real life. It’s been marketed entirely around the return to the Sydney stage of Rose Byrne – from face of Max Factor to STC poster girl everywhere on taxi-backs and billboards – 2016’s Blanchett box office substitute. Yet those who’ve rushed for tickets because of that and not because of the Mamet classic may be bitterly disappointed at the brevity of her appearance. You’d have to hope she’s either writing a book or doing petit point in her down-time because there’s an awful lot of it.

The trouble with the play – in the second decade of the 21st century – is that whether or not it was intended as an indictment of misogyny and/or an unforgiving portrait of “real” men and how they behave in the pursuit of power, doesn’t really matter. Do we really care that a mega-star (think The Rock) has told Charlie Fox he wants to make a movie with him and thus changes the game for the would-be mogul and his friend and boss, Bobby Gould? Not really, we’re waiting for Rose Byrne, as implied by the gorgeous photo outside the theatre and adorning the program cover.

Does anyone really give a toss about the sharp repartee and macho interplay between the two men (truly excellent though both actors are)? No, we’re all waiting, and kept waiting, for the actual Hollywood star. That this is true is evident in the loudly enthusiastic responses to anything and everything she does when she finally enters, bent over a tray of cups and a carafe of coffee to meekly serve the guys. It’s an interesting display of the difference between reality and perception – and perception wins hands down.

Speed-the-Plow was originally seen as a tough, satirical dig at Hollywood but that no longer holds up as the terrain is too familiar to be novel or particularly interesting. What inevitably grabs attention and thinking – this year in particular – is the casually nasty treatment of Karen by Gould and Fox and her equally unpleasant trajectory in the hands of her creator. Because, of course, the docile and sincere Karen is finally revealed as a ballbreaker and hustler, even worse than the men; and suddenly the predator is the tragic victim of her wicked ways. Oh please. 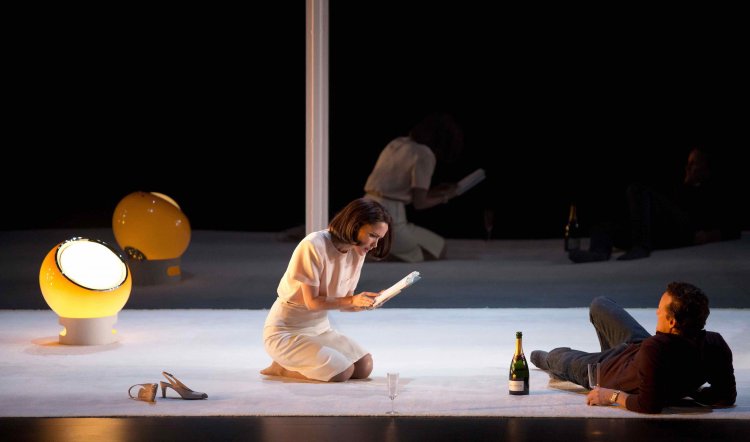 Byrne, Herriman and Hulme are fine actors and bring all their considerable skills to the stage for what now feels like an unworthy and creaky piece. The direction by Andrew Upton seems not to focus on what should be the moments of humanity and connection because the bromance overshadows all. (Karen’s seduction of Bobby isn’t there and as Bobby clearly isn’t in a lather over her, the heat necessary to make the end credible is non-existent.)

Adding to the disconnect, the Ros stage is too big for this intimate piece, but the auditorium is necessary for the “hurry, tickets selling fast” audience at which it is aimed. Designer David Fleischer has smartly and mostly successfully overcome the problem with boxes – a brightly white painted one for Bobby’s mid-redecoration office and a moodily-lit glass one for his luxe apartment (lighting Nick Schlieper). But the changes back and forth between these locations are carried out in long black-outs that add to the bygone feel of the play.

One question remains: why – what’s the point? Speed-the-Plow, in this iteration and possibly for a long time to come, is a moral void in morally void times. If that is the point, it’s well disguised and kinda pointless.