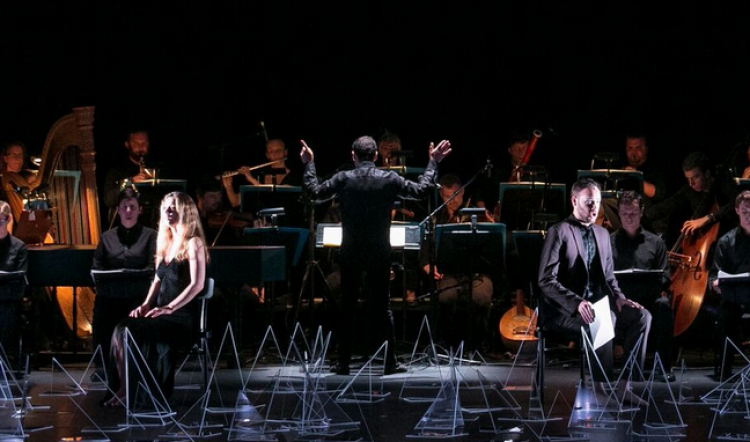 A festival isn’t just about larks and cocktails, it’s supposed to bring to town the kind of work and artists we are otherwise unlikely to see. And this is definitely the case with French composer Pascal Dusapin’s opera Passion. First staged in 2008 at Aix, it’s semi-staged here in a stark and minimal setting of black on black on a stage littered with beautiful and menacing shards of glass/ice (“mise-en-space” Pierre Audi).

Possibly the best and most notable aspect of the production, from the point of view of Sydneysiders, is that the Sydney Festival assisted Sydney Chamber Opera in mounting the performances and in bringing in the two remarkable principals, soprano Elise Caluwaerts and baritone Wiard Witholt.

The result is a dazzling 90-minute showcase of a 17-member orchestra of the SCO’s finest players under the baton of Jack Symonds and also includes six singers: Jane Sheldon, Ellen Hooper, Anna Fraser, Andrew Goodwin, Mitchell Riley and Simon Lobelson.

According to Clive Paget, writing in Limelight magazine, “Outgoing festival director Lieven Bertels has said that of all the companies he has seen in Australia, Sydney Chamber Opera is the one he would most like to export abroad.” And this performance of Passion clearly demonstrates why.

Drawing on the familiar story of Orpheus and Eurydice, although an underworld away from Gluck, the libretto – by Dusapin and Rita de Letteriis – loses poetry and some meaning in translation (into surtitles above the stage). Nevertheless, the music while spare and often subdued is also expressive and drenched in colour and atmosphere. 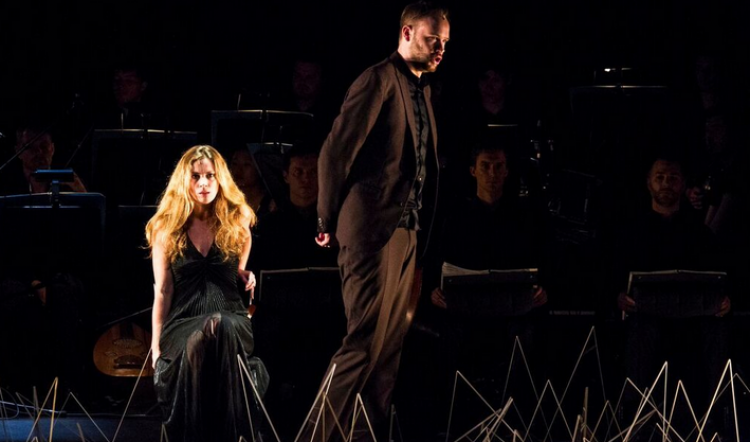 For someone – like me – who is unfamiliar with the composer’s work (this is the first time Dusapin has been staged in Sydney) the experience of the sometimes visceral choices of instrumentation was illuminating and exciting. James Wannan’s oud solo for instance, and the use of struck (rather than simple pizzicato) double bass; the vocal qualities of bassoon, cor anglais and clarinet in duets with the singers; and the occasional incorporation of soundscape elements via synthesisers.

Although semi-staged, the visual component quickly became integral with the orchestra and principals as lit by Nicholas Rayment in a way that – no pun intended – illuminates the proceedings. (The Recital Hall stage doesn’t lend itself to conventional theatrical lighting rigs or design so the original design, by Jurgen Kolb, would have had to be much modified.)

The hypnotic effect of the intensely precise and restrained music is heightened by the similarly stylised and mesmeric movements of Caluwaerts and Witholt. Both are striking stage presences at any time: she being conventionally gorgeous and of the much-featured long blonde hair and he more handsomely tall than any man deserves to be. They also sing like angels and engage with the production with obvious empathy and intelligence.

All in all, Passion is a thrilling ornament to the Sydney Festival: for most of us it brings the shock of the new and the stretching of the ears and minds. And it’s a wonderful next step for Sydney Chamber Opera. Caloo calay, o frabjous day.