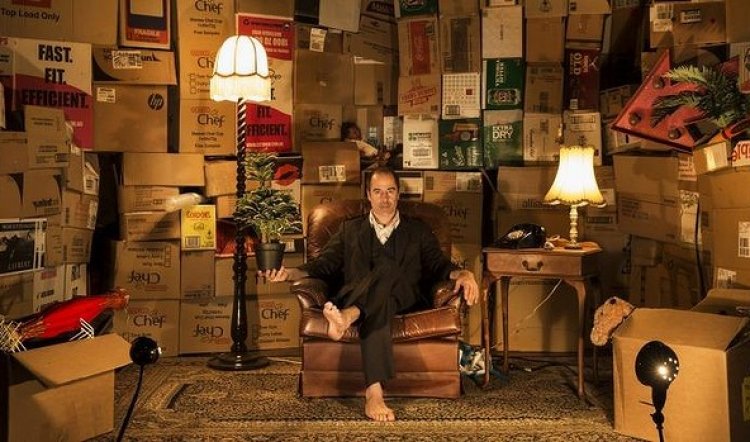 American actor and illusionist Geoff Sobelle is in town for the 2016 Sydney Festival with his creative team of director David Neumann, scenic installation designer Steven Dufala, lighting designer Christopher Kuhl, sound designer Nick Kourtides and heroic stage manager Lisa McGinn (whose task it is to un-wreck the wreckage after each show).

The result is a unique and towering spectacle of some 4000 (locally sourced) cardboard boxes, plus sundry other bits and pieces of domestic detritus, from standard lamps to teddy bears via discarded furniture and stuff that some might consider to be plain old rubbish.

So, for the rest of this month the Town Hall’s cavernous main public chamber will be a nightmare for minimalists while offering comfort to hoarders and those who defiantly say, “See, I told you it would come in handy one day.”

In the program notes, Sobelle asks the reader, inter alia: “Do you have what you need? Do you need what you have?” And these questions are posed and answered, obliquely and variously, throughout the 90+ minutes during which he merrily torments members of the audience (mostly sitting on cardboard boxes magic-marked “seat” or “dare to pick me up”).

The less you know about the show before walking in to the Town Hall, the better. The mix of whimsy, nonsense, profound insights and flashes of technical ingenuity and philosophical brilliance are all the better for it. Simply be aware that you may encounter ice skates, traffic lights, lettuce, a fair few bottles of wine and be privy to the kinds of phone conversations that make Seinfeld’s  “show about nothing” look action- and plot-packed.

Along the way you might find yourself thinking about the colours of traffic lights. If you haven’t studied them lately, they are an always pleasing scarlet, a wishy-washy ginger and equally watery emerald. And then, whether those perpetually in motion lights might be substituted for patience, acquiescence and obedience, which are the human traits most often encountered in The Object Lesson.

As well as laughter – some of it nervous or bewildered – audiences can expect to discover all kinds of things, about themselves, their wallets and their pockets. Sobelle is a master storyteller and unlikely magician. As well as dragging things out of boxes he also draws insights and memories from members of the audience that are as surprising (to the individuals) as rabbits popping out of hats.

A classic “festival show” – the kind you would never encounter at any other time of the year.

Disclosure: there is audience participation and despite my best efforts, I was participated. The result: I came home and cut up expired credit cards and other embarrassing archaeological relics I’d felt compelled to share with hundreds of kind strangers.