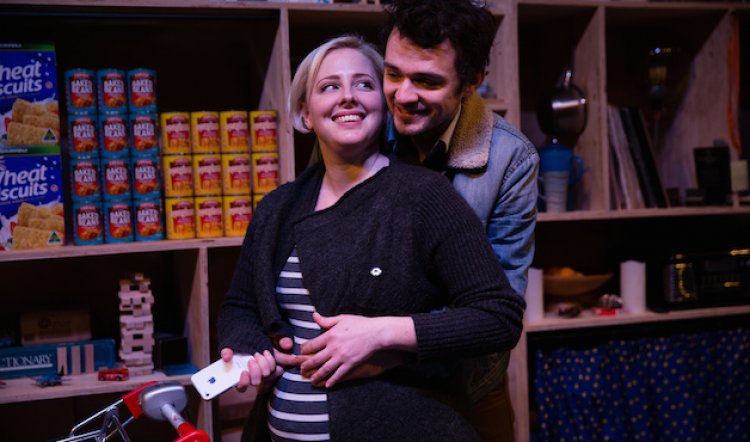 THE BLOCK UNIVERSE (or so it goes)

THE BLOCK UNIVERSE (or so it goes), Cross Pollinate at Old 505, 7-25 June 2016, photography by Kate Williams: Briallen Clarke and Jacob Warner

The Block Universe is Sam O’Sullivan’s first full-length play and it’s obvious why it got him shortlisted for the Philip Parsons Fellowship and the Silver Gull Award in 2015. That he didn’t win reinforces the old saw that awards are lotteries, because it’s a thrilling piece of work.

This production, directed by Dominic Mercer and starring Briallen Clarke and Jacob Warner, is equal to the play’s demands and is a fascinating and often funny 80 minutes of ideas, humanity and the moment.

Unless you’re up with the latest in philosophical theory, the title might be a puzzle, but the short story, says Wikipedia is, “According to the growing block universe theory of time (or the growing block view), the past and present exist and the future does not exist. The present is an objective property, to be compared with a moving spotlight.”

Andrew (Jacob Warner) is a post-grad uni student who’s taking time out while he wrestles with the existential bewilderment of time. So much so that his gap year is now three years long and although he’s working in the university library, he’s not a librarian and not really living.

Along comes Kristina (Briallen Clarke), an Estonian who made the mistake of following her boyfriend back to Australia from her seaside resort home town on the Baltic. Not surprisingly, she finds herself alienated, out of place and out of love – and pregnant.

What happens between these two mistimed misfits is an engaging puzzle of those moments of memory, imagination, past and present that make up the patchwork of daily life. They find themselves in a combustible and precarious place with laid-back softy Andrew often at emotional odds with acerbic, unsentimental Kristina.

Communication as a concept is also an integral element of the play: Andrew’s dreadful “library” jokes take on a life of their own as Kristina grapples with the idea of their lameness being the point. Their wildly differing senses of humour and language are at once universal and poignant. Clarke and Warner give the most delicious, detailed and intelligent performances, and Clarke is assisted in her Estonianism by voice and dialect coach Amy Hume.

Set designer Isabel Hudson and lighting designer Alex Berlage have created a gorgeously simple and complex place for the action: an extended IKEA-type wall of shelves, nooks, cupboards and crannies in which are arranged the treasures and necessities of daily living and work. Sound designer Alistair Wallace also contributes to the world of the play with a subtle and impressionistic inner vision of time.

The Block Universe is a bittersweet love story and an exploration of the moments that make up our lives and memories – or not. Yet another fine production from Sydney's thriving independent sector. It’s clever, touching, funny and highly recommended.