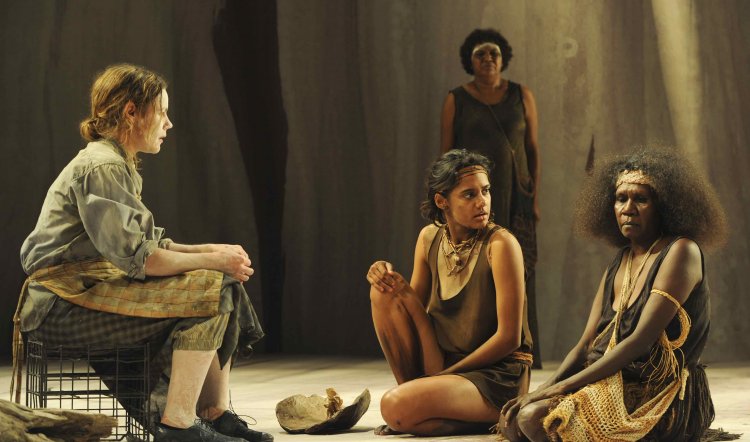 In 2013 a review of the world premiere season was published here – http://www.stagenoise.com/review/2013/the-secret-river

If you followed the link and read it, please be assured: this re-staging is as fine, possibly finer. (Although how would one honestly know, memory being the flawed thing it is?) Its effect on the audience seemed as profound: a rare and sustained standing ovation greeted the actors as they stood hand in hand at the end.

Re-reading the review late last night after the opening night suggests the significant material changes are some actors. Most notably, Ningali Lawford-Wolf has replaced Ursula Yovich in the role of the Narrator/Dhirrumbin, both women tower over the narrative. Georgia Adamson instead of Anita Hegh as Sal Thornhill – both were/are steely-splendid.

Jennifer Hagan rather than Judith McGrath is the old crab apple Mrs Herring and both lent/lend sweetness and light relief. On piano and cello in a corner of the stage, Isaac Hayward plays Iain Grandage’s cinematic score and is an electrifying presence. Richard Piper takes on Smasher Sullivan in place of Jeremy Sims and is as violently creepy. Among the Dharug, Miranda Tapsell and Ethel-Anne Gundy have moved on and are replaced by Madeleine Madden and Frances Djulibing (above). Rory Potter is three years older and now plays the older rather than younger Thornhill boy but is just as appealing, while Toby Challenor channels the young Potter as both cute and smart.

The magnificent Trevor Jamieson and Nathaniel Dean return as the central protagonists Ngalamalum and William Thornhill. Colin Moody also effectively reprises Thomas Blackwood. They are memorably joined by Shaka Cook and Kelton Pell as the abiding, bewildered presence of the Dharug.

It’s tempting to say Neil Armfield’s production is even more luminous and more precise this time around but who knows. Again: memory is faulty; we retain fleeting impressions and they become the memory. But they are the tip of the iceberg – beneath that is the vastness of what we don’t clearly recall. Nevertheless, this production retains the visual beauty and subtlety of the original, as described:

“…set designer Stephen Curtis, lighting designer Mark Howett and costume designer Tess Schofield are the production's visual lynchpins. The Sydney Theatre stage is bare but for a campfire that straddles cultures and time through its makings of part-massive tree trunk and part-rusted out 40 gallon petrol drum. While an oil can and plastic milk crate, used as seating, also suggest the modern detritus to be found on a river bank. Through subtle lighting changes the empty stage alternates between sandy river beach, sunlight reflecting rippling water, a roughly-dug corn patch, a shaded forest glade and the Thornhills' first crude attempt at a dwelling. Behind them looms the sandstone escarpment, always the same but ever-changing - blue-grey in the moonlight, bleached out by the midday sun, washed red and ochre by rain.”

Well actually, the petrol drum and river rubbish have gone and the milk crate now props up the musical score, but rarely has the often tricky space of what’s now called the Ros been more effectively used.

What has tangibly changed, however, is the zeitgeist (viz to wit: “the defining mood or spirit of a particular period of history as shown by the ideas and beliefs of the time”). In 2013 Julia Gillard was PM, Quentin Bryce was Governor-General and Marie Bashir was Governor of NSW, and many of us really liked that. That Kate Grenville’s important novel had been adapted by Andrew Bovell on commission from Cate and Andrew for STC seemed like something else that felt good and timely. Rightly or wrongly or naively, there was still hope in the air. 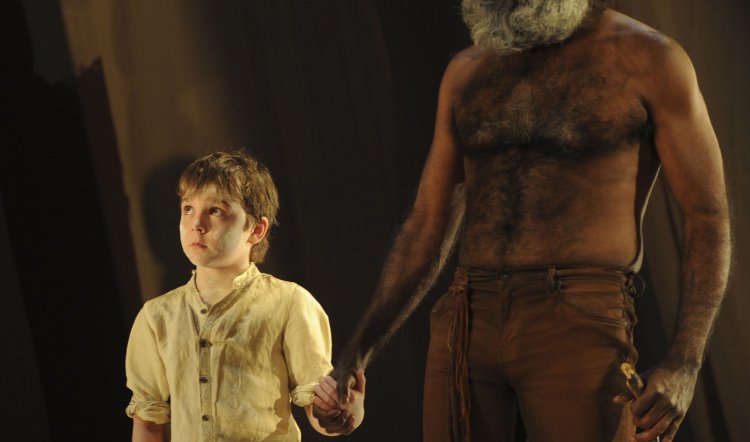 By the end of that year, however, we were on to our third prime minister and the unthinkable had occurred with the election of a far right-wing, ultra-religious thug. He began an energetically and successfully to cause as much embarrassment and shame as possible through his deeds and utterances.

Lest we forget: Q&A question on how Jesus would handle asylum seekers: “Don't forget Jesus drove the traitors from the temple as well,” he said. And – of particular significance in this context – he also said the arrival of the First Fleet was “the defining moment in the history of this continent.”

And now, although the thug has gone off to skulk in the shadows, his replacement is somehow just as disappointing. That’s because – again, rightly or wrongly or naively – much more was expected from him. Malcolm Turnbull is a politician, how could we expect him to fix everything and do everything he ever said he would or that believed in?

Children and babies are being sacrificed on the altar of an expedient and immoral refugee policy he inherited from his predecessors on both sides of politics. Social equality is the plaything of a plebiscite. And Indigenous rights are as far off the table as they’ve ever been.

In the federal parliamentary Research Paper 12 1996-97 on “The Need for a New Preamble to the Australian Constitution and/or a Bill of Rights” it was written, inter alia:

“It would probably be widely agreed that the preamble is no longer fully representative of the views or the sentiments of the majority of the Australian people. The language is arcane, the preamble neither expresses the absolute sovereignty of the Australian people as an independent nation nor refers to democratic values and aspirations, and the process of reconciliation with the original inhabitants of the continent is ignored.”

That was 1996-97 and still we are nowhere near it. No wonder the return of The Secret River to the stage seems so wonderful and yet so terrible. It’s profoundly moving and intelligent. It honours the Dharug people and its modern audience (no surtitles for language – you figure it out, you’re the one at a loss and lack, you make an effort) and it plays with its history and theatricality in the most entertaining and yet respectful way.

STC is apparently still in talks to take the show to London. Unfortunately neither Hugo nor Cate are in it but this is a thrilling, pivotal and agonisingly honest production that would take the Barbican by storm, one hopes – rightly or wrongly or naively. It would be good to show them what was done in their name – to black and white. And maybe help us figure out why there is such a broad streak of cruelty and indifference running through modern Australia.