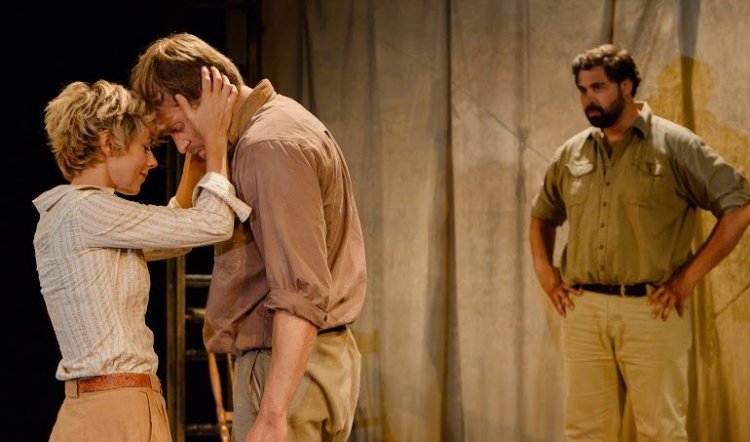 THOMAS MURRAY AND THE UPSIDE DOWN RIVER

Quintessential Australian stories are getting a good working over at the moment – the new adaptation-from-the-novel Jasper Jones at Belvoir, the timely revival of The Golden Age at STC – and now another “new” one at Griffin from Reg Cribb.

“New” because Thomas Murray and the Upside Down River was originally commissioned some years ago by Melbourne Theatre Company, fell through the cracks of management change and has languished on the “hmmm?” pile ever since. Now brought to Griffin by co-producers Pippa Bailey and director Chris Bendall aka Stone Soup, it finally has the staging it deserves.

Tom Murray (Grant Cartwright) is a fifth generation farmer whose tens of thousands of acres are bordered by the Darling river. A prolonged drought has turned life to dust and despair, the once mighty river is now “six inches of water”. It’s a situation only too familiar to those who live and work on the land beyond the Dividing Range; and indeed the playwright spent much time talking to those very people in researching the play.

Tom’s story is told back to front – in keeping with the upside down river, perhaps – and we are quickly introduced to his childhood best friends Lucy (Francesca Savige), daughter of neighbouring farmers; and Billy (Bjorn Stewart), the Aboriginal whose father so disapproved of his white mates he was beaten blacker and blue for his troubles. As kids the inseparable trio larked about, dreamed and dallied by the river, whose mysterious waters carried their hopes and fears whether they knew it or not. But for both boys Lucy is their love and broken hearts are inevitable.

Reg Cribb is a writer whose imagination catches fire when presented with the everyday dramas and dreams of “ordinary” Australians. His Last Cab to Darwin, play and film, are evidence of that: a small-scale epic of love, pain, death and redemption with a leavening of caustic humour on the side. Thomas Murray and the Upside Down River is in the same league and possibly even more ambitious. 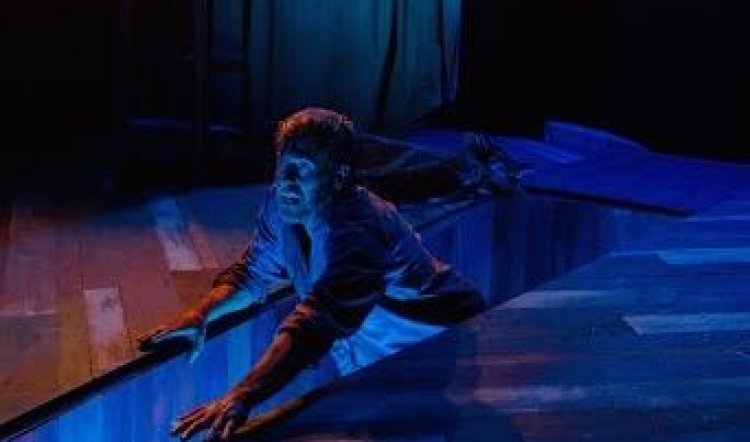 With the passing of seasons, floods and droughts the river hides and reveals its secrets: the detritus of transgressions of the humans who’ve lived along its banks for millennia. What is turned up for Tom, Billy and Lucy changes their lives for good – and ill.

Along the way they are variously helped and hindered by their parents and a pair of daffy Engish visitors from Cambridge. These roles are taken on by Vanessa Downing and Nicholas Papademetriou and the two are outstanding foils for the younger cast members; touching and funny by turn.

Set and costume designer Dann Barber has done interesting things with the Stables space – he is an emerging artist from Queensland and new to the theatre and his choices are fresh and, with the work of lighting designer Alexander Berlage, often electrifying. Kingsley Reeve’s sound design and composition are also sensitively attuned to the play.

Grant Cartwright’s Tom – a boy and a man with unbearable pain and knowledge – is central to the success of the production and he carries the weight without apparent effort. Savige and Stewart are equally fine in their roles. The play is a rich exploration of character and story. The language crackles with humour, bitterness and authenticity. It could do with a bit of a trim, particularly in the second half when the mood changes and a “jump the shark” moment threatens to derail what has gone before; but the director and actors hold it together. For the most part however it enthrals and entertains and doesn’t take the easy way home. Good stuff – recommended.