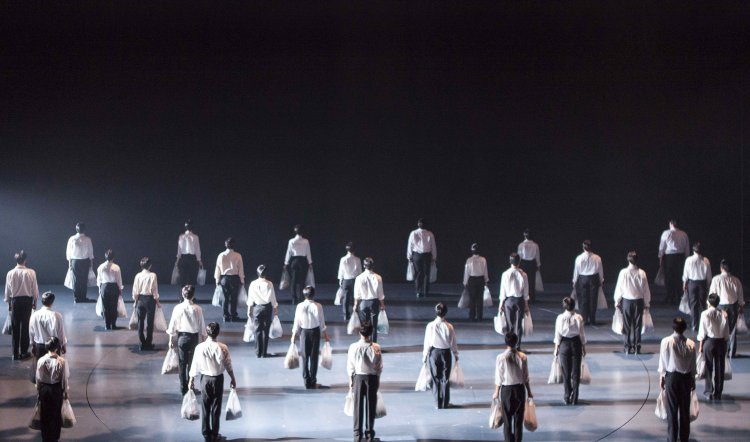 Thirty-two-year-old Brit, Lucy Kirkwood has been successfully writing and performing in her own work since Grady Hot Potato in 2005. This one opened at the Almeida in north London in early 2013, transferred to the West End later that summer and won the year’s major awards (Olivier and Evening Standard) for best play and new play.

With a cast of 32 (!) and some 40 separate scenes, Chimerica is not for the faint-hearted, unskilled or under-resourced. How good then that STC’s new(ish) artistic director Kip Williams proves himself stout-hearted, dazzlingly skilful as the play’s director and has ingeniously stretched his human resources with a cohort of 21 NIDA students. The result is a spectacular production that’s both entertaining and enlightening.

Kirkwood was inspired by imagery of “Tank Man” – the unidentified man in 1989 Beijing who stood in front of advancing army tanks carrying nothing but two plastic shopping bags, one in each hand. It was an insanely brave attempt to halt the government-ordered military advance on the populace but what became known worldwide as the Tiananmen Square Massacre happened anyway. Kirkwood wondered: whatever happened to that man?

In the play this question is asked by the fictitious Joe (Mark Leonard Winter) an American news photographer. In 1989, the story goes, young Joe was on his first assignment, with journo partner Mel (Brent Hill) in what was supposed to be a geo-political backwater. Then the near-civil war erupted and finally, from his hotel window, Joe got the money shot and his career was made.

In the late ’90s the Whitney Museum mounted a grandiose exhibition, The American Century, and few saw it as ironic, nor what was coming. Fast forward three decades and China has been transformed but the USA has not. In econo-speak “Chimerica” refers to the relationship between China and America (the US) and was coined by economists Niall Ferguson and Moritz Schularick.

After the global financial crisis (GFC) of 2008, Ferguson expanded further in The American Interest in January 2009, “The most important thing to understand about the world economy over the past decade has been the relationship between China and America. If you think of it as one economy called Chimerica, that relationship accounts for around 13% of the world’s land surface, a quarter of its population, about a third of its gross domestic product, and somewhere over half of the global economic growth of the past six years. For a time, it was a symbiotic relationship that seemed like a marriage made in heaven. Put simply, one half did the saving, the other half the spending.” 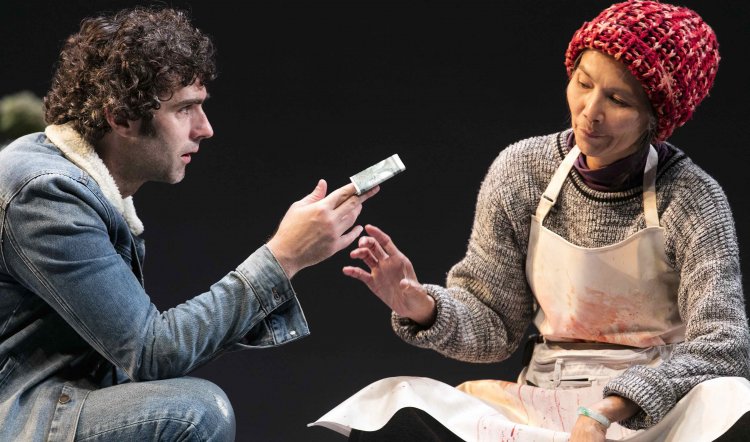 And now Joe is older but not a lot wiser. His contact, Zhang Lin (Jason Chong), tells him sharply, “This country owns you. You don’t get to lecture us any more.” Yet still Joe blunders around after "his" story, overly-enthusiastic, like an adolescent Labrador.

English marketing maven Tessa (Geraldine Hakewill) with whom Joe will fall in love, shines a further light on his wilful darkness: “The road to the Chinese market is ... littered with the corpses of companies ... they believed China was looking over the fence wanting to be America and nothing could be further from the truth.”

In The Guardian on 24 June 2009, Martin Jacques wrote, “There is a growing recognition that China's economic rise will change the world. But that change is still seen in narrowly economic terms. There is an assumption that the political and cultural effects of China's rise will not be that great. This is profoundly wrong. The political and cultural impact will be at least as great as the economic.”

And he continued with an observation on the West’s longstanding sense of itself as the centre of the world, “The reason for this tunnel vision is Western hubris: a belief that our modernity is the only conceivable one, that our political and cultural arrangements will ultimately be adopted by everyone else.” This “hubris” perilously under-estimates the Chinese.

That’s the macro, and in microcosm, Joe under-estimates everything and everyone around him. The best that can be said of him is that he’s naive – but another interpretation could be that he still oozes the arrogance of Graham Greene’s The Quiet American (written in 1955 and set in Vietnam, but still resonating here).

Still in pursuit of the elusive Tank Man, Joe sends Zhang Lin an email and a horrified Zhang responds via Skype, “You think an email like that from an American journalist does not get seen by the censors? ‘Tank Man’ in the subject line, Joe, in the subject line! Are you stupid or something?” Answers on a postcard please, and they will of course be seen by the censor. 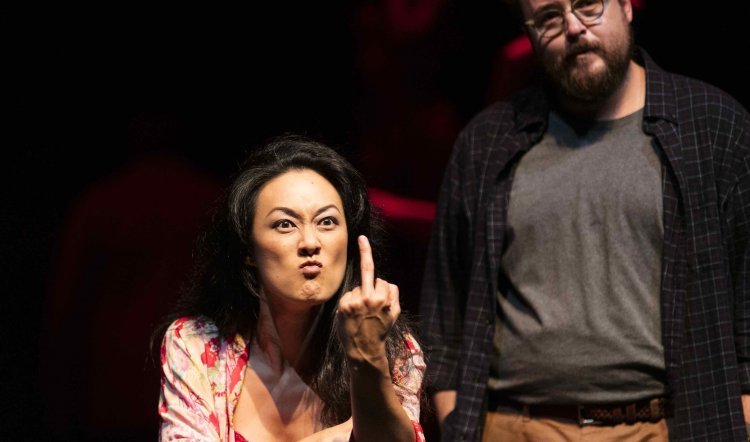 Chimerica is epic in style and ambition yet at heart is a noir-ish thriller and old fashioned romance. The humans in it are human-size and the great and awful events are rendered ghost-like through brilliant and apt choreography of the vast company and the stage revolve (Kip Williams). It’s played out on a soaring set design and lighting that both daunts and allows the audience to go where it will in the collective and individual mind; (designer David Fleischer, costumes Renee Mulder, lighting, Nick Schlieper).

It moves fast and kaleidoscopically and most actors play several roles. Gabrielle Chan stands out as a Beijing fish seller who’s seen it all and is not impressed by anything. Anthony Brendan Wong (Zhang Wei) is similarly chilled by his life and events, while Jenny Wu represent a younger China and and Charles Wu is especially effective as young Zhang.

Rebecca Massey makes much of her US senator – and others; Tony Cogin is a Lou Grant-style news editor – and others; Monica Sayers chews the scenery as a Beijing night club dancer – and others; and Matthew Backer is a quintessential corporate suit – and others. And The Sweats delivers an under- and overlay of sound and music that contributes mightily to the show.

The NIDA cohort is integral to the production, as finely tuned and disciplined as a world-class corps de ballet, all devised and rendered by Kip Williams, who is, frankly, the unseen star of the show. Chimerica arrived in Sydney laden with expectation and glittering prizes. And this director, company and production have delivered a scintillating version of it. Recommended.