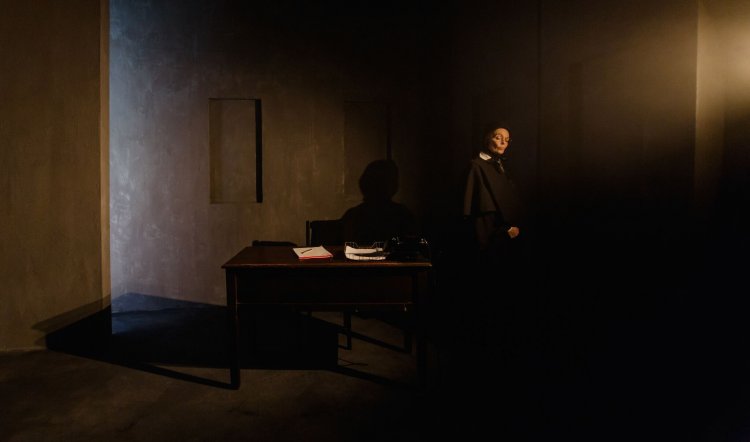 DOUBT: A PARABLE, Red Line in association with Apocalypse Theatre company at the Old Fitz, 12 May-3 June 2017. Photography by Robert Catto: above - Belinda Giblin, below - Belinda Giblin and Matilda Ridgway

In the opening moments of John Patrick Shanley’s Doubt: a Parable, he neatly and without fanfare places it in time when Father Flynn’s sermon makes reference to the assassination of President John F Kennedy the year before. It’s a vital piece of information as it gives reason for the emotional turbulence and uncertainty of 1964 (never mind the spiritual turbulence and uncertainty of Vatican II).

The times they are a’changing and one among many that don’t like it is Sister Aloysius (Belinda Giblin), principal of St Nicholas Church School in the Bronx. Her steel-rimmed spectacles and severe black habit form a barrier between her and the world that she has no intention of breaching. For her, the advent of the ballpoint pen is a sign of educational decay and to be resisted along with all other expressions of moral mutability.

Sister James (Matilda Ridgway) is of another generation for whom there should be no obstruction between pupil and teacher, God and love. She wears her heart on her sleeve – although it’s part of the same forbidding garb as her superior’s – yet there is a world of tiny difference in it. Instead of the grim black bonnet worn as a helmet pulled down over eyebrows, Sister James’s headwear allows us to see her hair and wide-eyed approach to life. The contrast between the two women is startling.

In the middle of this serenity-turned-tumult is Father Flynn (Damian de Montemas), the charismatic priest and sports master. He works in Sister Aloysius’s school yet, in the very middle of Vatican II’s three years of all male (2500+) pontifications, it is clear that it is he rather than she who enjoys God’s authority. When Sister James brings to Sister Aloysius her vague disquiet about Flynn’s conduct with one of the boys it sets priest and principal on a collision course that will have no winner.

That the boy, Donald Muller, is the school’s first “Negro” student only adds to the conflict. When the suspicions become further entangled by the boy’s own actions a dreadful inevitability takes hold. Events achieve a life and momentum of their own. Sister Aloysius calls Donald’s mother (Charmaine Bingwa) to her office and the two clash in the most logical yet unpredictable way.

Running at just 85-90 uninterrupted minutes, Shanley packs worlds of drama, conflict and ideas into Doubt. The title itself is enough to send an audience to the bar afterwards to continue the wrangling around, “did he?” “Didn’t he?” “Was she right?” “Was she wrong?” and so on, because the play itself illustrates the dilemmas and prejudices facing the school principal just as plainly as those confronting the priest.

Also in this engaging piece we find the frustrations and obstacles facing the nuns: Sister Aloysius might be the conservative stickler for rules and the old way of doing things, but she is also an educated, worldly woman. Yet her standing will never be on a par with the Church’s male hierarchy, particularly the local monsignor, her immediate boss and a man who is not her intellectual equal.

On the other hand, it is painfully obvious that Sister James is the one for whom the fundamentals of Church teaching – love, kindness, tolerance – are paramount. She is the teacher every child yearns for and the one Jesus would recognise and want in his gang were he to return any time soon. And Mrs Muller’s attitude is yet another way of walking in the world from within another’s pair of shoes.

Doubt: a Parable is a remarkable play and it’s clearly so in this instance through a brilliant production from producer/director Dino Dimitriadis. Possibly the most important aspect is the casting of the four roles. Belinda Giblin is breathtaking as the acerbic – often funny – Sister Aloysius. She is rigid as a ramrod in her initial convictions and beliefs, but by the end she has browbeaten herself as well as those around her to the point where she has visibly shrunk in the face of her actions.

Matilda Ridgway is equally remarkable in portraying the youthful innocence and naiveté of the younger nun for whom disillusion is a matter of personal shame and sorrow. Opposite her, Damian de Montemas is a plausible Father Flynn whose aura of decency and upright male authority is offset by twinkly attractiveness. Surely he cannot...but maybe...

In an era in Australia of the Royal Commission into Institutional Responses to Child Sexual Abuse, it is as if the play were written yesterday. And for parents, the dignified pleas and perspective of Charmaine Bingwa’s fiercely caring mother offer yet another point of view.

All four performances are thrilling and as played out on Jonathan Hindmarsh’s gloomily institutional set, with its long, slit windows from which Sister Aloysius sees the world without fear that its light will penetrate her domain (lighting by Alexander Berlage), it’s hard to imagine a better or more enthralling production. So recommended.