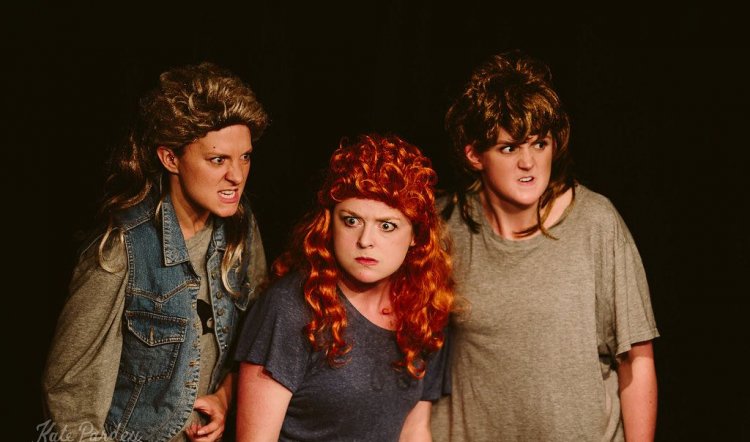 The news, in a program, that a play is “By Anton Chekhov in a new adaptation by X” can strike dread into the stoutest heart. Notorious adapter Simon Stone calls it “overwriting” and that’s probably a more accurate description of his tendency to obliterate the original. In the STC’s new version, Andrew Upton takes a more traditional approach: a good sprinkling of “fucks” and colloquial mod Oz, and the sisters’ longing for Moscow becomes a simple yearning to return “home”.

On the whole, however, this Three Sisters remains recognisably Chekhov although much of his humour is missing. This could be because it begins with a very funny  scene in which Alison Bell’s Olga blows up party balloons from a helium cylinder. A simple idea, and yet her timing and interaction with balloon, gas and noises is hilarious and subsequently never topped. Much as one balloon whizzes and farts its way around the stage when she “accidentally” lets it go, the comedy dissipates almost as quickly.

The balloon business is a stealer of meaning, however: what Olga says during the scene is crucial to what happens for the rest of the play and it’s secondary and lost. Nevertheless, as elder sister and school teacher Olga, Alison Bell is the linch pin of a production that, on opening night, didn’t ever find its balance amid uneven performances and half-baked ideas. 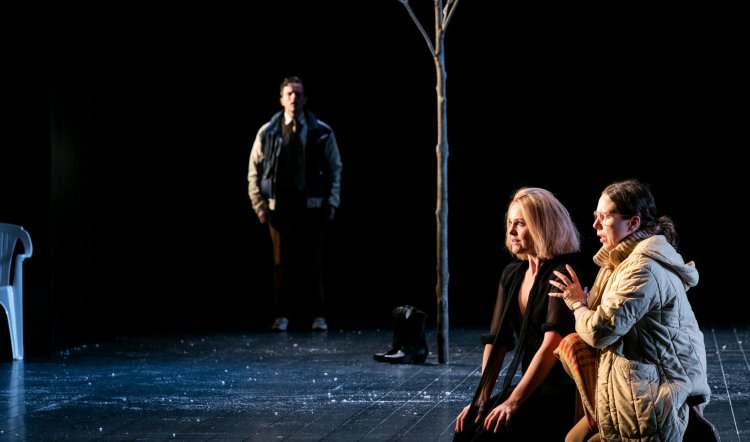 On a mainly abstract set (design Alice Babidge) the hollowness of their lives is reflected via a glass wall. Mercifully very little happens behind it but it does allow goings-on in the garden to be seen, as well as the occasional unsettling mirror images as the sisters struggle with unsatisfactory lives.

Masha (Eryn Jean Norvill) is married to a tedious school teacher (Chris Ryan) while conducting a passionate affair with the philosophically-inclined and married Colonel Vershinin (Mark Leonard Winter). And for reasons never satisfactorily revealed, she sort of channels Stevie Nicks in cowboy boots, gypsy-style black outfit and occasional bursts into song. The three acts of the play take place over fifteen years but, like Ms Nicks, Masha still wears the same old outfit of her heyday. On second thoughts, no wonder she’s depressed.

The youngest of the trio, Irina (Miranda Daughtry) is the idealist – she wants to make a satisfactory life through being useful and working. In the Chekhovian world this makes her a novelty amid all the genteel middle class ennui, but here – in an undefined nowhere in which they are adrift – her enthusiasm and energy seem almost pointless. She has the best of the men as a suitor in Tusenbach (Harry Greenwood) but also the unwanted and violent attentions of another (Rahel Romahn) but as she loves neither, of course, she’s also depressed. 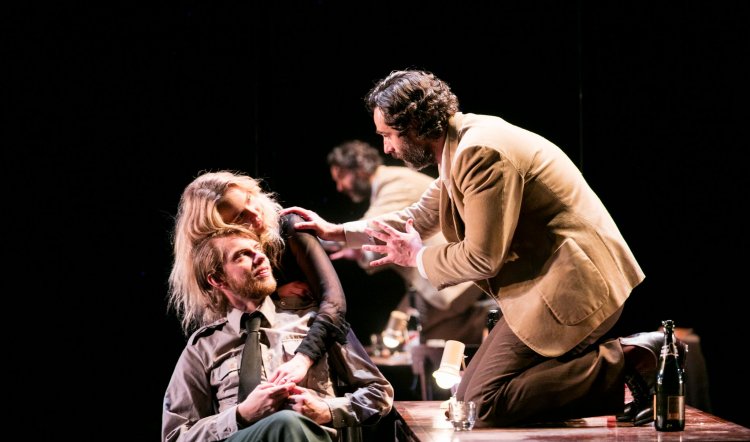 And then there are the other men. The drunken doctor (Anthony Brandon Wong) is fatally hampered by a dreadful wig and never emerges from beneath it. As the adulterous Vershinin who, at the best of times, is a bit of a boofhead in his eagerness to party at the sisters’ house while his wife and kid stay home, Mark Leonard Winter adds a further irritation in having his volume permanently stuck on full blast. It’s exhausting to watch and listen to as he leaps and cavorts, and when the regiment finally leaves for its new posting, it’s a relief rather than the sadness it should be.

Brandon McClelland is the sisters’ feckless brother Andrei. His irresponsible behaviour and patriarchal pomp, as he gambles away their future security, built up such a level of irritation in this audient at least as to underline that he gives a fine performance. As his opportunistic social-climbing wife Natasha, Nikki Shiels is a vision in skin tight, hot pink vinyl pants, but they shriek Grease and Olivia N-J and it undercuts the vengeful bitchiness of her upward progress in favour of easy laughs. As it is, the shiny pink is the lone note of colour in costuming that suggests a mass purchase at Best & Less. Never before have so many shades of tan and beige, neatly pressed jeans and horribly patterned jumpers been gathered in one place. Wherever the Prozorov family is, no wonder they want to go home.

Director Kip Williams tends to hit the bullseye to brilliant effect (Suddenly Last Summer, Cloud Nine) or miss by kilometres (Macbeth) and this Three Sisters is in the latter category. At just over three hours including an interval, time passes as slowly as the decade and a half of the play and it’s impossible to care what happens to these people. This is a great pity because Chekhov himself makes us see and feel with the sisters and their hangers-on. He did it through a subtly brilliant balance of comedy and pathos – both almost entirely missing here – and that’s depressing.