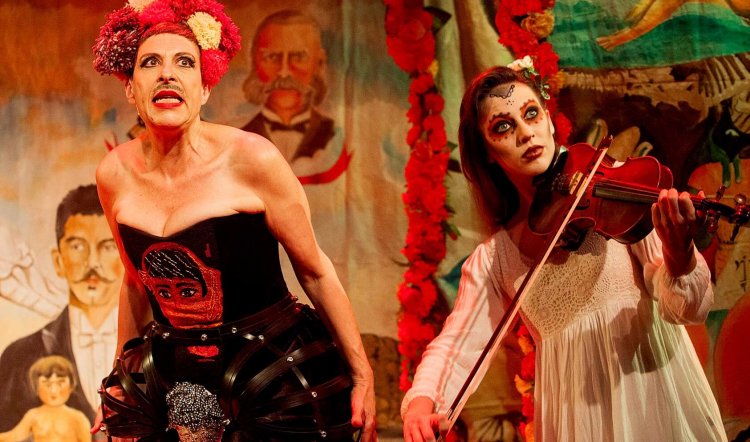 Once upon a time, Frida Kahlo was merely fabled Mexican muralist Diego Rivera’s wife. Her “little” paintings tolerated by critics as decorative adjuncts to his great – male – art. And for long, Kahlo was also a freak show: the sum total of her physical disability (childhood polio), her uncooperative embrace of her own facial hair, and the infamous details of the street accident that mutilated her for life.

Yet nothing stopped her pursuing her own course: a unique and increasingly influential art practice and a life rich in love, loss and adventure. After her death in 1954 – at just 47 – her work was virtually expunged by the male-dominated art establishment until she was forcefully rediscovered by feminism in the late 1970s.

English feminist academic Laura Mulvey’s 1983 short film Frida Kahlo and Tina Modotti (the photographer who was one of Rivera’s lovers but also Kahlo’s lifelong close friend) was central to Kahlo’s resurrection and place in the pantheon.

The film accompanied a major exhibition at the Whitechapel Gallery in London curated by Mulvey with her then husband Peter Wollen, out of which the Kahlo we know today erupted and cracked the art world’s status quo. The exhibition toured to Berlin, Hamburg, Hanover, Stockholm and New York before the final and arguably most significant venue: the Museo Nacional de Arte in Mexico City. 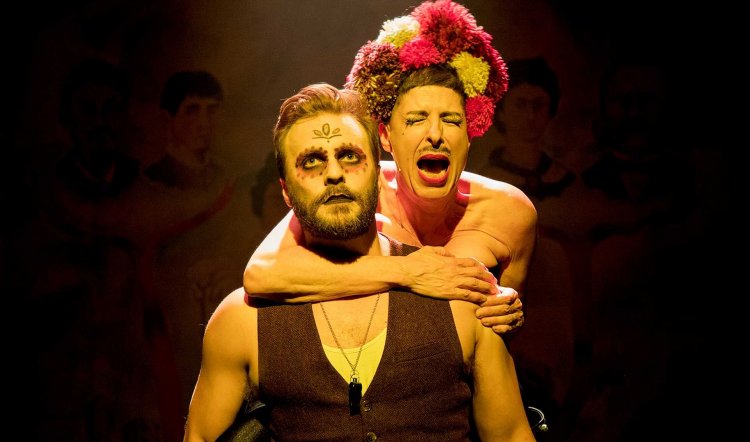 Okay, what does this potted history of the feminist icon have to do with Carmen, Live Or Dead, a 75-minute musical-theatre-cabaret show created in 21st century Australia? Well, quite a lot, actually. It’s the fertile ground in which Carmen exists.

Carmen (Natalie Gamsu) is the fictitious child of Frida Kahlo and one of her many lovers, the Russian revolutionary and theorist, Leon Trotsky. This character – dreamed up by Craig Harwood and Gamsu – could also have been the one described by Surrealism’s architect, Andre Breton when he saw Mexico and Frida Kahlo as the: “magic point of intersection between the political and the artistic lines beyond which we hope they may unite in a single revolutionary consciousness...”

Although Laura Mulvey – in quoting Breton – immediately responds, “Fatal point, we may think as we survey its histories in this (20th) century: art corroded and destroyed by politics; politics smothered and sweetened by art.” Mulvey also described Kahlo’s art as, “work which blended reverie, cruelty and sexuality – the surrealist virtues, whose enchantment was heightened for Breton by the connection with Trotsky (then living in Kahlo's ‘Blue House’, her self-portrait hanging on his study wall).

And so – suddenly – framed by a sideshow alley-size painted proscenium arch, there is Carmen Frida Leon Davidovich – the love child – in black embroidered bustier, gleaming high boots, bejewelled codpiece, luscious floral headwear and moustache (Costume design by Shauna Lovisetto). She is the personification of “reverie, cruelty and sexuality”, while describing to a wide-eyed Hayes Theatre audience the precise physical nature of her intersexuality – “I like ‘hermaphrodite’,” she says of the poetic sound of the word – and of her rapacious journey through life to this point: the untimely day/night of her death. 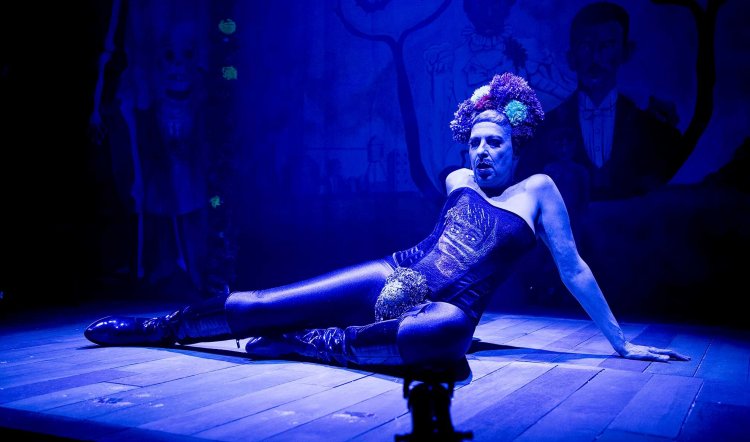 In 1969, describing his fabled Fellini Satyricon to Roger Ebert, the mischievous auteur Federico Fellini said of his notorious Roman sexcapade: “If you see with innocent eyes, everything is divine.” And there’s a thing: supported throughout by her apparently luckless assistants, the violin-playing Delilah (Stefanie Jones) and guitar- and piano-playing Angel (Andrew Kroenert) Carmen is both monster and innocent; hapless and all-knowing.

Carmen engages with the audience, with laughter, with her beloved mother and the despised Rivera, and with Delilah and Angel; there is no escaping her pained relish in life’s loneliness. This double-edged effect is also made familiar as she launches into original yet distinctive songs by iOTA – the master of ironic romance.

Directed by Shaun Rennie to engage the audience in music hall style as the charismatic Natalie Gamsu unwraps the layers of fun to reveal a person who bleeds, Carmen, Live Or Dead is as disconcerting as it is entertaining. Stefanie Jones and Andrew Kroenert (also musical director and arranger) are virtually silent but powerful presences and the show is a delight to look at (lighting by Benjamin Brockman, set design: Dann Barber).

Carmen, Live Or Dead is illuminating, politically provocative and deceptive in almost every way. Its roots are deep in the lives and cultures of both Kahlo and Trotsky and that’s remarkable in itself: if Carmen isn’t actually their child, she should have been. Recommended.