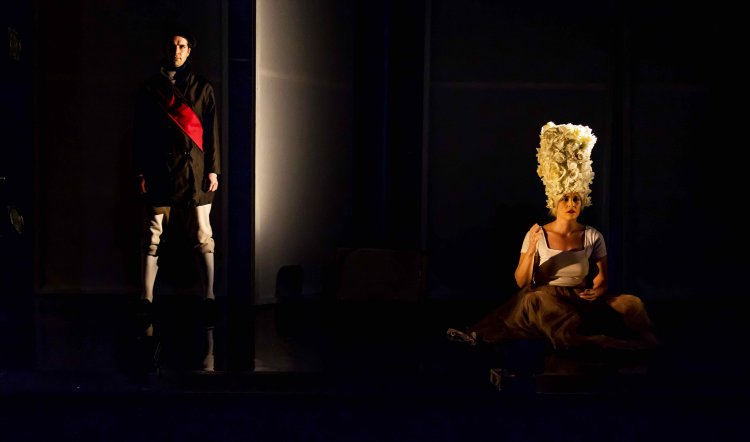 David Adjmi’s modern take on Marie Antoinette, the notorious and finally headless Queen of France, is a portrait of a woman who has a penchant for extravagance and artifice. His contemporary language, interspersed with 18th century words, has a kinetic rhythm which gives it a fun and accessible edge.

His Marie (Elisa Armstrong) is headstrong, restless and uncomprehending of the dissatisfaction of her people, longing for her Austrian home and for a child; believing the gossip that she is barren and a whore undeserved. She reveals that she is practically illiterate having had no head for (poor) schooling and being married at fourteen.

Louis XVI (Gabriel Partington) is portrayed as a nervous child, distracted and unable to deal with conflict. He is taken by surprise that the love affair the royal pair experienced early was falling apart as the (French) revolution brews. He knows not where or to whom to turn or to believe.

It is a story about opulence, the haves and the have-nots; of those born into wealth and title and the uprising of those that weren’t. The people blame Marie and Louis for the financial difficulties of the nation. It was only a matter of time before the chanting in the street became “Liberté, Egalité, Fraternité!” Marie’s only defence: “I was born to be queen. It wasn’t my choosing, I was born into it”.

Marie complains about her life to a sheep, to her ladies-in-waiting (Eleanor Howlett, Jessica Tanner) weeps about not having children, and her homesickness for Austria. The sheep, unlike her ladies in-waiting, implores her to change her ways. We watch her descent into madness, (where we get another conversation with the sheep) and the strength she regains at the end, believing that her execution will not be the end of Marie Antoinette. History agrees with her.

In this production on the small stage of Studio 2 at the Northcote Town Hall there are very big updos, much tulle, some pantaloons and a sheep, courtesy designer Eloise Kent. Her set is three screens that work exceptionally well for exits and entrances and to project history and time.

In the title role, Armstrong embraces the style of the writing and has a wonderful German and French lilt when required, it is her show and she brings it to life. Directed by Rachel Baring, Marie Antoinette is another fine offering from Heartstring Theatre.