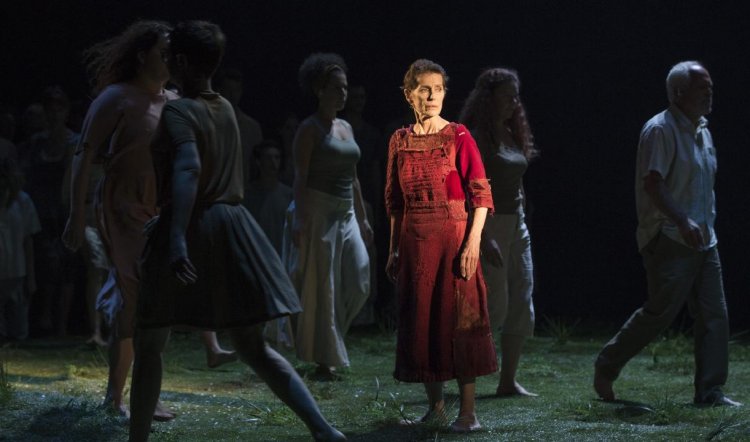 MEMORIAL, Brink Productions and Adelaide Festival at the Dunstan Playhouse to 2-6 March 2018. Photography by Shane Reid

English poet Alice Oswald is currently BBC Radio 4’s Poet in Residence – which says more about the ABC and the trashing of Radio National and Classic FM than most would care to think about. Oswald has won every poetry prize for which she’s eligible including the TS Eliot Prize (multiple nominee) and winner (2002) for Dart, a book-length homage to the river near her home in Devon. And in 2017 she was awarded Canada’s International Griffin Poetry Prize.

In 2011 her sixth collection, Memorial: an Excavation of The Iliad was published to acclaim by Faber & Faber. Oswald is a classicist although she has worked mainly as a gardener and in a review of the collection in The Guardian, Kate Kellaway wrote of it:

“The task she has set herself is a poetic filleting (or, as she describes it, the ‘reckless dismissal’ of seven-eighths of Homer’s narrative) and a memorialising of every soldier, juxtaposed with extended similes – a Greek chorus of them. She describes herself as trying to retrieve the poem’s enargeia, which translates as 'bright, unbearable reality’, and writes that she is doing this ‘as you might lift the roof off a church in order to remember what you are worshipping’.”

What is being worshipped in this extraordinary stage adaptation of the poem is life itself. We see and hear it in the form of the 215 dead soldiers whose names are recorded in The Iliad and for whom Oswald has made a new, fleeting place in the sun. And in the chorus of 215 Adelaide volunteers who represent the names, their families and also the 100th anniversary of the end of WWI.

It is a phenomenal achievement by Brink’s Chris Drummond who directs the piece with choreographer Yaron Lifschitz, artistic director of Queensland’s Circa. It takes both literary works and combines them with a score by English film-theatre-dance composer Jocelyn Pook for a 10-piece ensemble of multi-instrumentalists and singers – at first an abstract vision of light, shadow and darkness, until they begin to play.

As eyes struggle to understand, the stage of the Dunstan Playhouse is a vast dark cavern that gradually lights up revealing a smaller mezzanine space high on the back wall. There the orchestra is placed. A harp’s blond timber glows golden, a piano accordion gleams; there’s a double bass, a cello, violins, hand bells wait to be picked up. Soprano Kelly McCusker is a solo echo of the poem’s most poignant lines, while Belinda Sykes and Tanja Tzarovska contribute the distinctive vocal styles of the collision between Asia and Europe. Music director and counter-tenor Jonathan Peter Kenny adds further electrifying voice elements. 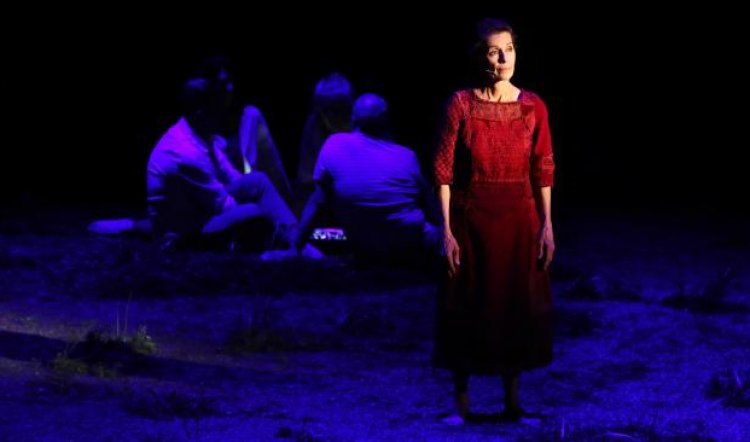 On the stage itself, as the undulating surface gradually morphs into a thicket of hands raised in supplication, the poem begins – performed by a single narrator in the form of the magnificent Helen Morse. Dressed in a rough garment of rufous and blood-brown patchwork, she is the sole splash of colour as the “dead” rise to their feet clad in a blanched array of beige, cream, white, grey and charcoal street clothes.

The combination of Michael Hankin’s set and Nigel Leving’s lighting is at once striking and empathic. The swirling traverses and circles of the crowd are side-lit from empty wings, while Morse is caught most often in the wash of multiple spot lights: harsh or dreamlike by turn. The effect, as she tells succinctly of wounds and manners of death, of those left behind and grief unspoken is transfixing.

Rarely has war – ancient or modern – been so beautifully and piteously depicted. Children gambol and play, a young woman carries her toddler. Three dancers emerge from the throng to represent the madness of fear and the moment of dying before disappearing into the milling crowd once again.

Memorial honours the dead in the simplest, most honest way. There is no glorification, no machismo, no renown, no heroics. Rather our grief is assuaged through collective compassion and the classic inspiration of art – in eloquent music, the words of great poets and the performance of a great actor.

Memorial must be taken up by arts festivals at home and internationally. It’s a wondrous work by all concerned. Meanwhile, it was a jewel in the 2018 Adelaide Festival crown.