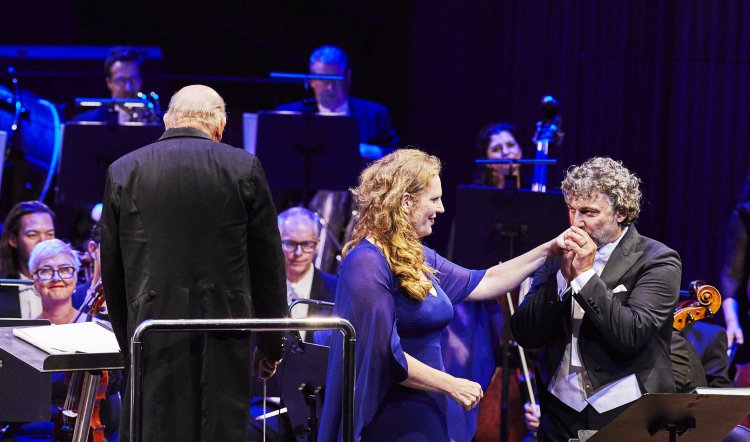 First staged at La Scala in 1896, Umberto Giordano’s Andrea Chénier is infrequently performed – among the verismo operas, that is. On the one hand, it’s not considered to be of the first rank, on the other, it demands an exceptional tenor in the title role. That all changes when Jonas Kaufmann comes to town, and when a conductor such as Pinchas Steinberg picks up an orchestra such as Opera Australia’s excellent musicians (prepared by Brian Castles-Onion) and releases them from the stage into the generous atmosphere of the Concert Hall.

Perhaps the biggest difference, however, is that this concert staging, before a packed and pre-rapturous audience, is not a one – nor even two – man band. Each of the principals is electrifying in their own right and the OA Chorus too brings subtlety, precision and feeling to the work.

With a libretto by Luigi Illica, that sounds better in romantic Italian than it reads in English surtitles, Andrea Chénier  is loosely based on the life and death of a poet of similar name. He is caught up in the maelstrom of the French Revolution, heads and accusations are flying in every direction. Provocatively perhaps, the setting somewhat mirrored contemporary society: governments being tossed, brutal oppression of civil unrest in the south and a war with Ethiopia resulting in humiliating defeat for Italy.

Nevertheless, the often lush and always romantic music and unique vehicle for an outstanding tenor made the work immediately popular. In recent times, such stars as Domingo and Pavarotti ensured its survival in the latter half of last century – and now Kaufmann. 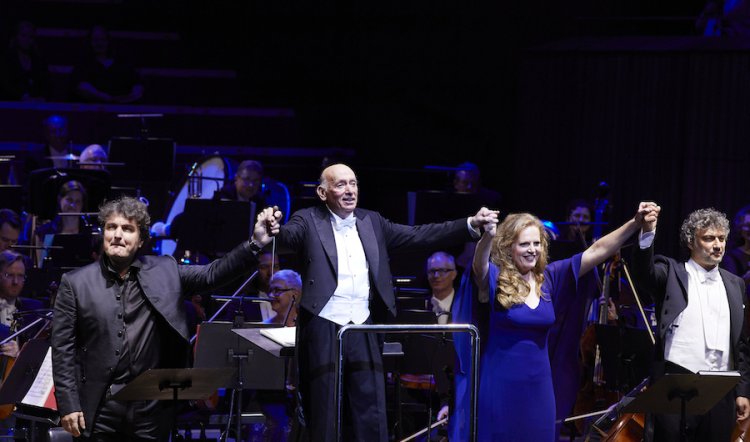 Easing onto the platform and waiting attentively as the scene is set by others, he takes his cue in Act One with the stirring aria “Un dì all’azzurro spazio.” He is at a party thrown by Contessa de Coigny (a powerful Dominica Matthews). She calls on him to improvise a love poem for her guests. His passionate if unwise response is a rebuke to the assembled aristocracy and high clergy, condemning their indifference to the poor.

It’s not surprising that the contessa’s daughter Maddalena (Eva-Maria Westbroek) is instantly bewitched: the voice, the charisma, the politics! It’s here that performer and character become intertwined, not only in the form of actor-singer Kaufmann, but also because he and the Dutch diva have performed these roles together before.

Their ease with the demands of the score, and with one another, is unmistakable. This is especially significant on the exposed concert platform. There is nowhere to hide: no costumes, no scenery, no extra bodies to take a little of the heat. The singers are on their own, it’s thrilling. And it continues to thrill as they progress from youthful ardour to a more mature state of accepting their fate, their deaths and their love.

Also giving a singularly confident and modulated performance is Ludovic Tézier as Carlo Gérard, Chénier’s nemesis and rival in love. Gérard is not an aristocrat and thus has little chance with Maddalena. He is enraged by this but with the tumbrels rolling on the way to the guillotine, he realises times are changing. However, like the other members of the ill-fated triangle, he too advances from revenge and betrayal to an awakening conscience. Tézier is a very welcome import. 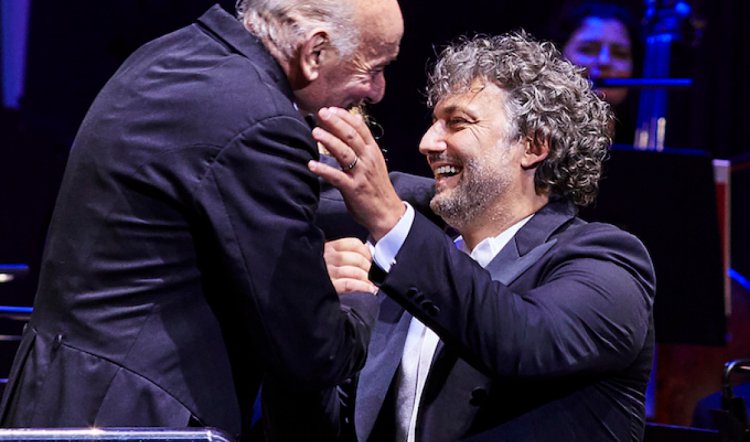 Without costumes or stage movement to signal place, time and identity – it’s Paris, it’s a palace, it’s a cafe, then we’re before the Revolutionary Tribunal and finally in St Lazare prison – it’s tricky to work out the who’s who among the assembled white tie and tails, but the supporting roles are equally strongly cast.

In a brief appearance as a grieving grandmother, the incongruously youthful Anna Dowsley is spectacular: in this exalted company she soars and sounds like liquid amber: golden and rich. Also making her mark without apparent effort, Sian Sharp brings a rare and welcome warmth as Maddalena’s faithful maid Bersi.

As one of the obnoxious Incredibile set, Benjamin Rasheed is let loose as a creepy, nuanced actor and singer; Graeme Macfarlane is his opposite but horribly similar as The Abbé; while Jonathan Alley as the Major-Domo and Dumas, Luke Gabbedy as Mathieu, Christopher Hillier as Fléville and Alexander Hargreaves as Fouquier-Tinville and Schmidt all make much of the melodic music and characterisations.

Interruptions for applause and cheering greet Kaufmann, of course, but also Tézier and Dowsley, while Westbroek, particularly when singing of her mother’s death – “La Mamma Morta” – with palpable grief and tenderness, stopped the show for minutes; and the Kaufmann-Westbroek duets are in the region of sublime. A marvellous event, with one more in this short, sweet season – although a visit to the OA website suggests tickets might be hard to come by!