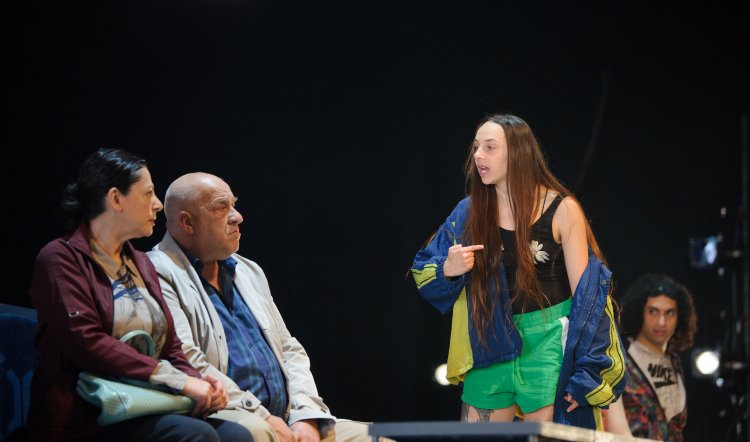 Anthem, written by five writers with 14 actors and two musicians, runs for just a week. This could only happen at festival time, which is both fortunate and unfortunate.

What enables this to work, apart from the brilliant Susie Dee’s direction, is that it is set on Melbourne’s over-crowded railway trains and depicted almost every scenario of train travel that most of us have experienced. It’s the railway compartment as the melting pot that makes up Australia. Or: who is more Australian? The white person born here, the first peoples, the old new Australians, the new, new Australians, or living in the world of isolation that is Australia.

There are five distinct voices, five plays that make up the whole. They are Uncensored by Andrew Bovell, Terror by Patricia Cornelius, 7-Eleven and Chemist Warehouse a love story by Melissa Reeves, Brothers and Sisters by Christos Tsiolkas and Resistance by Irene Vela. Each and all of them giving the audience a night of delight. It/they are a real festival show.

The underlying and unsettling narrative is fear and loathing in this the supposed “lucky country”. To a degree it is lucky, of course, but for many life and living is tough, and it is all about class.

The piece opens with a prelude conversation taking place in a first class carriage in Europe between two people talking about the world as it is for them: a white, educated woman and self-confessed nihilist (Eryn Jean Norvill) and a man of colour (Thuso Lekwape) who’s somewhat more sanguine having escaped Australia and poverty at a young age for a better life, leaving behind his siblings (for whom he yearns) and his drug addicted mother. It is a conversation about climate, sexism, racism and equity – from the comfort of the middle class. He is about to return home to Australia to his bothers and sister, money in his pocket but far removed in ideology and class from them. 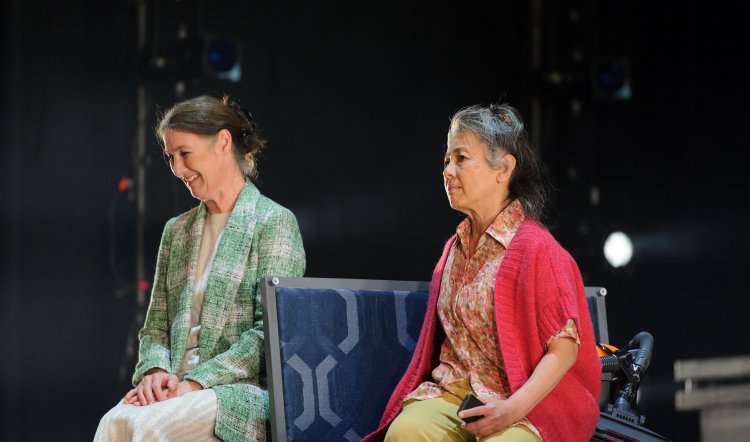 This short conversation ploughs into Bovell’s chorus of commuters, talking, observing, rushing for their respective trains all in their own worlds, all trying to make a buck to live. Old and young; no one wanting to make eye contact. Even when a stoush is brewing between an old Greek couple (Maria Mercedes and Tony Nikolakopoulos) and a young, angry Aboriginal woman (Carly Shepherd) about whose land it is.

Interwoven is the busker (Ruci Kaisila) riding the trains, singing for her supper. Kaisila’s voice is breathtaking, the chosen songs hilarious and her turn of phrase cuts through like a knife. She walks through the mayhem, rattling her cup with such presence that it is brilliantly disturbing.

Wage theft is the satirical driving force Melissa Reeves’ 7-Eleven saga. A young student (Sahil Sulujs) is underpaid and angry; he decides to take the issue into his own hands. He buys a gun and heads back to retrieve what is his. The store owner (Tony Nikolakopoulos) is stunned but not alarmed and talks his way out of the situation. This leaves the student paranoid, with a gun and a girlfriend (Eryn-Jean Norvill) intent on a Bonnie and Clyde rampage. Believe it or not, it is hilarious, but it comes from a place of extreme dissatisfaction with their lot in life. Norvill and Sulujs play it to the hilt.

Cornelius’s offering captures the all too real societal tragedy of women just trying to survive. There is the one who used to have everything (Maude Davey) dumped by her husband for a younger model, left penniless and homeless, travelling the trains, keeping up appearances with three designer shopping bags. On one trip she encounters her cleaner from her former life (Amanda Ma) living hand to mouth and in an abusive marriage. She wants to connect, she needs to connect but the cleaner is too hurt and angry.

On the same train, a desperate young mother (Eva Seymour) and her child are running late to hand over the traumatised child to the father – if she is late she will lose custody. The woman is angry, tired, late and fare evading. On a number of the train trips is a supposed happy-go-lucky young couple, until we see the hand of violence (Dan Whitton) keeping his terrified girlfriend (Jenny M Thomas) in line. No one says anything. 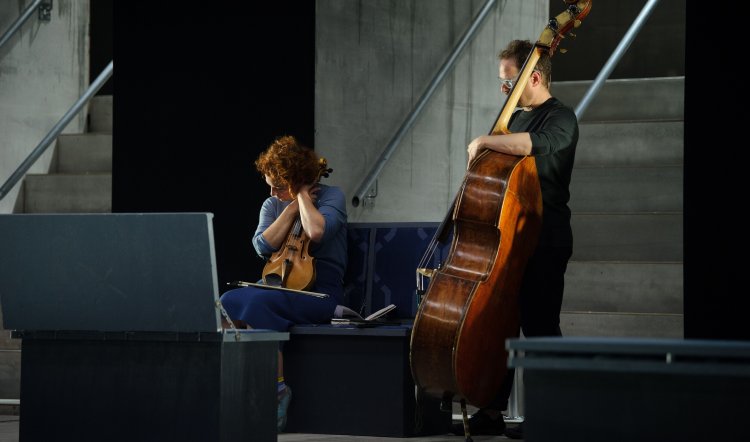 As on many trains, outside of first class that is, those on board are the young and the restless, the lost and the fearful, and those taunting others with their fucked up lives. Tsiolkas presents the bogan siblings from a junkie mother and different fathers; the brothers and sister all shades of the skin tone spectrum. The sister (Carly Shephard) stands up for Aboriginal land; the younger, whiter brother (Reef Island), with a short angry fuse, is ready to stand over and punch anyone who gets in his way. And there’s the older quieter, smouldering sibling (Osmah Sami). They stalk and prey on passengers who try desperately not to engage.

Irene Vela’s Resistance doesn’t let us forget older political struggles and crammed trains with marginalised people heading to extinction. The class system is well and truly on display in Anthem. It is funny and bleak. I realised afterwards that there wasn’t any hope.

The staging (Marg Horwell) has three areas of steps down to the platform and the trains. You see people’s legs coming and going, rushing, loitering. When they’re closed the train seats look something like a catacomb especially with the backlit stairwells. Then they turn into seats, all on individual rostra that the actors seamlessly shift around. The lighting (Paul Jackson) complements each stage and phase. Finally, Dee’s direction of the large cast, some playing more than one role, is masterly. Once again, she demonstrates why she is one of Australia’s finest.

Anthem is a successful and important way to start the 2019 Melbourne Festival.