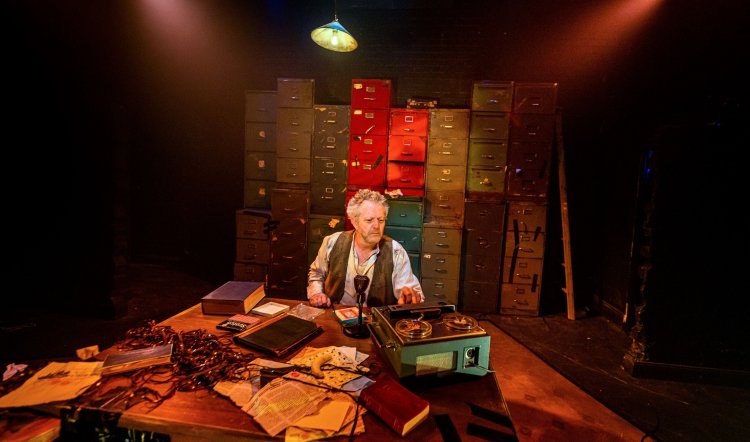 First staged in 1958 when Samuel Beckett was despairing of ever finding success as a writer, Krapp’s Last Tape is one of the pinnacles of 20th-century drama. Reach the top and a world of wonder is revealed.

According to the playwright’s instructions, the 50 minutes are set in “late evening in the future”. He was 52 at the time and the lone human character is 70 and looking back on a life of disappointment. The other character is a reel-to-reel tape recorder and it’s a fascinating device because it simultaneously embodies a disembodied self and the past, in the present!

As Krapp prepares himself for the day’s tasks of reading old diaries and listening to tapes, he procrastinates in baleful forays around his room, in search of this and that. It’s a gloomy place with a desk and single overhead light above. On the desk are the tape recorder, a microphone and many boxes of tapes. It’s overlooked by a wall of filing cabinets, stacked high enough to need a ladder to reach the top drawers. Here and there are flurries of discarded tape, like oversized dust balls. (Brian Thomson’s design is economical and inspired.) 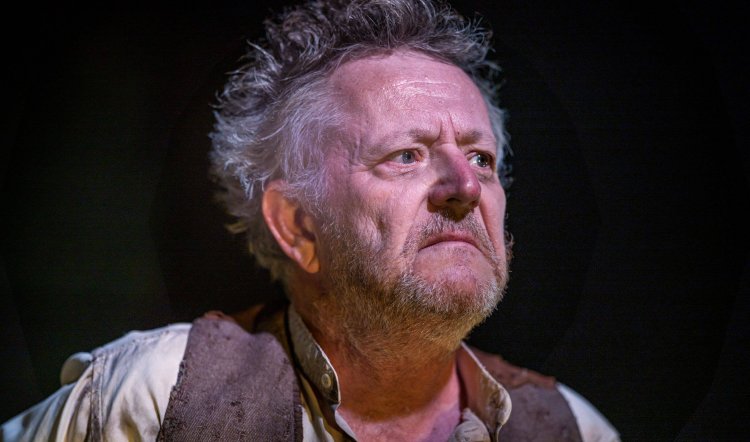 As Krapp, Jonathan Biggins is at first irascible and vaguely diverted by his previous self. He says nothing but everything is obvious in his demeanour. Projecting 20 years into the future, Beckett saw a man who epitomised failure and Biggins’ tall, spare frame crumples in on itself in unkempt appearance and evident disdain for this defeat.

As he listens to 39-year-old Krapp blethering about nothing much, the famously pompous description “viduity” is uttered and sends the puzzled Krapp searching until he finds a dictionary. This is a relief because he helpfully reads out the definition: “viduity: quality, state or period of being a widow.” Who knew.

Krapp’s Last Tape is a microcosmic depiction of our macro world. The revelations are at once mundane and immense. We live in a circular state where the present and future are combined, often back to front. We know ourselves through memory, yet we construct and re-construct those memories to suit the moment. And, although Krapp’s dialogue with his younger self is via tape recordings, we do the same with selfies and video clips on Insta and the rest. Plus ça change. 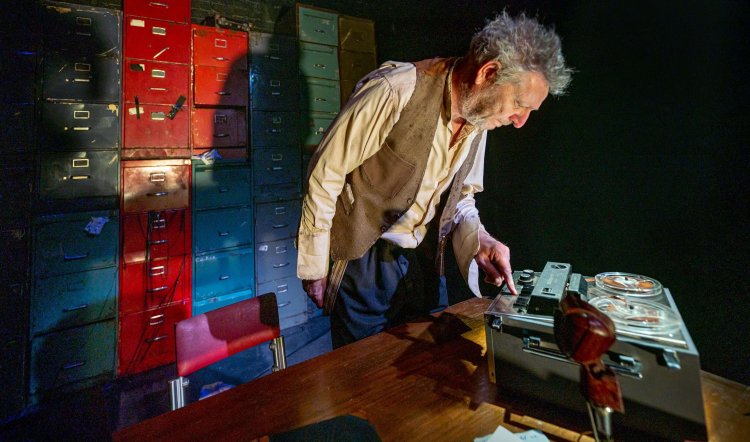 So much and so little is said in the 50 minutes – which are over in a blink – yet what is revealed is profound and universal. Gale Edwards has said that her work with Biggins on this difficult little treasure was more conversational than conventionally directorial and the result is a man who inhabits the role and the space with comfortable familiarity. He shuffles bunches of keys to unlock drawers – that contain nothing of value. He shuffles up the ladder to retrieve bananas. He eats the bananas, reminding as he does so that there’s no elegant or non-suggestive way to eat the fruit.

His younger voice booms out: “Have just eaten three bananas and only with difficulty refrained from a fourth. Fatal things for a man with my condition.”  He stops, reverses and restarts the tape. He can, of course, hit “erase” at any time. And as it’s his life slowly spinning on the spools, the actions of stabbing at the machine’s buttons become increasingly disturbing. He skips over parts he doesn’t want to hear again, but he knows anyway: isn’t that the truth!

At times he is sourly honest: “Perhaps my best years are gone. When there was a chance of happiness. But I wouldn’t want them back.” Yet moment by moment, he and we discover fragments of beauty, poignant recollections, and acerbic commentary. It’s a famously remarkable and rarely-seen piece and is brought to vivid life in an ideal setting. Recommended without reservation.