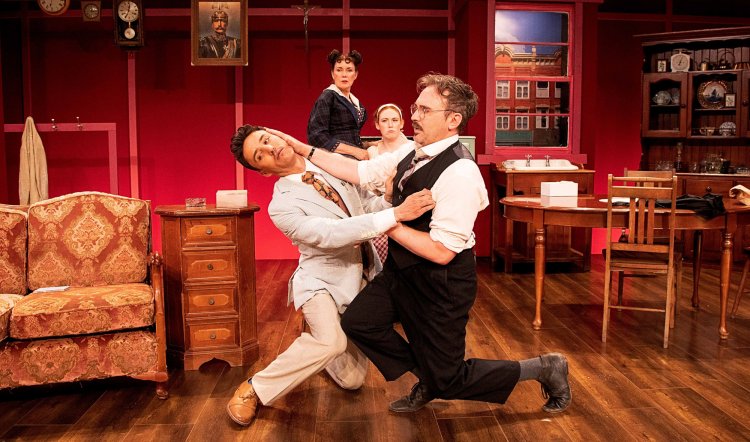 The much-admired American comic actor-sometime-playwright Steve Martin has enjoyed good fortune in Sydney. His Picasso at the Lapin Agile was successfully workshopped and premiered at Belvoir by Neil Armfield in 1993. Also at Belvoir, Armfield directed a starry and successful staging of The Underpants in 2003. And now Anthony Gooley deftly directs an equally starry production of what was originally Die Hose, a German political comedy from 1910, by Carl Sternheim.

Steve Martin being Steve Martin, he took the original and instead of middle class angst about class, anti-Semitism and the Kaiser, he turned it into a sex comedy whose roots (no pun intended) are in Brian Rix’s English funnies such as Let Sleeping Wives Lie, Not Now, Comrade, A Bit Between The Teeth and Stand By Your Bedouin. The result is a curious mix of elements that don’t really gel. It underlines yet again how brilliant Tracey Ullman is in being the rare non-German to find anything funny in Germany, viz to wit, her Angela Merkel.

Nevertheless, if you’re a Steve Martin fan there’s lots in The Underpants for you. It’s begins with Louise Maske (Gabrielle Scawthorn) and her husband Theo (Duncan Fellows). They are almost one year married and he is an assistant clerk in an obscure government department; he is all pomp and almost no circumstance. And, because he is desperate to hold onto his position, he is mortified by an incident that occurred shortly before the play opens. He is as ponderous and full of himself as a council water truck – and sprays damp nonsense just as efficiently.

That morning Louise had been among a crowd of well-wishers on a major strasse watching the Kaiser go by. While waving patriotically, Louise’s bloomers had fallen about her ankles. Being a together young woman she stepped out of her bloomers, picked them up and stowed them away. In a matter of seconds she was once again waving while also hoping no one had seen the shocking event.

Louise is friends with upstairs neighbour Gertrude (Beth Daly) who quickly informs her: no such luck, her knicker catastrophe was “announced at the train station.” Louise is now famous. Aside from his pride in being an assistant clerk in an obscure branch of the civil service, Theo is anxious to hang on to his job because they need the money. He plans to let the spare bedroom in their apartment and, much like clerical employment, it depends on their respectability. 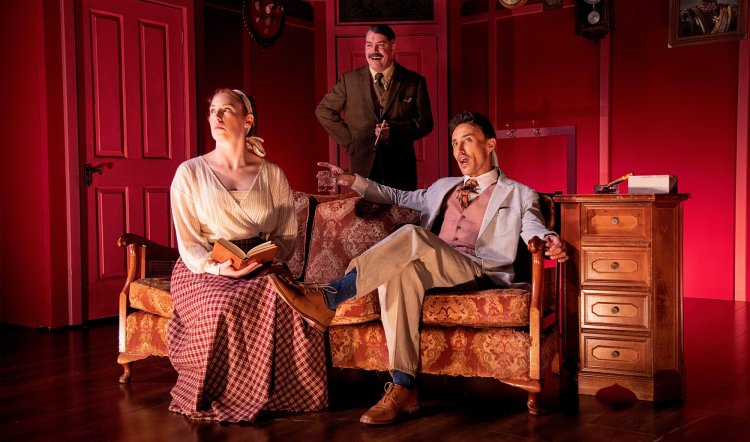 In quick succession, two men arrive eager to rent the room. They are the hilariously oleaginous Versati (Ben Gerrard), a smouldering yet unpublished poet, and Cohen (Robin Goldsworthy) a barber. Instantly it is apparent that the two are mad for Louise, having observed her inadvertently dropped drawers. Their slo-mo wrestling match is a highlight of the night.

It takes no time at all for the love- and sex-starved wife to turn into a mess of lubricious longing in the presence of unbridled male lust. In this she is aided and abetted in juggling suitors by Gertrude, who is only a step behind in needing to put a cork in it and, in the hands of Beth Daly, is a sharp-tongued, beautifully timed antidote to the noxious blokes.

Reminding all of the ultra-stiff decorousness of the Second Reich, however, is a third candidate for the spare room. The prim and pompous Klinglehoff (Tony Taylor) arrives late in the piece and that’s a pity because he is one of the funniest men in Australia.

There is a lot of coming and going and many near-misses in The Underpants and therefore a lot of doors. Anna Gardiner’s set – of the Maskes’ apartment living room – is well equipped with these and is also painted deeply blushingly rose, but is otherwise properly petit bourgeoise. Benjamin Brockman’s lighting punctuates time and scene changes and also reminds us that mood lighting is a really good idea – because in the Kaiser’s Germany there wasn’t any.

What happens over The Underpants’ 90 minutes is largely up to the caliber of the actors and the way the director choreographs them and their entrances, exits, and the physicality and action. The success of this production is due to them, rather than the play, which is about as funny in 2019 as a pair of fallen bloomers. 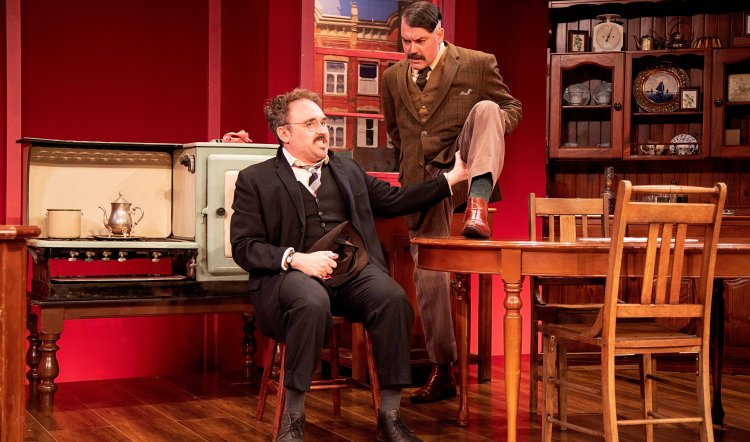 Steve Martin, as performer or writer, is someone who’s long eluded me: juvenilia and gurning just doesn’t appeal and neither does the marital premise of The Underpants, which is tone deaf in the era of #MeToo. It was fairly excruciating in the early 2000s and now is simply not funny, particularly as satire, which can become outdated overnight.

Nevertheless, there is much to like about this production – in the main because of the company. There is also an underpinning of melancholy and honesty that I think is unique to this interpretation. Gabrielle Scawthorn’s Louise starts off as a naive young wife, but somewhere along the way she almost morphs into A Doll’s House's Nora Helmer and her journey becomes electric – not before time.

Similarly, the underlying nudge-nudge anti-semitism around the character of Cohen (“that’s with a K”) is subtly played by Robin Goldsworthy to great effect. As well as glorious comic timing, he brings dignity and melancholy to what might otherwise be a very unfunny character, and is a stand-out.