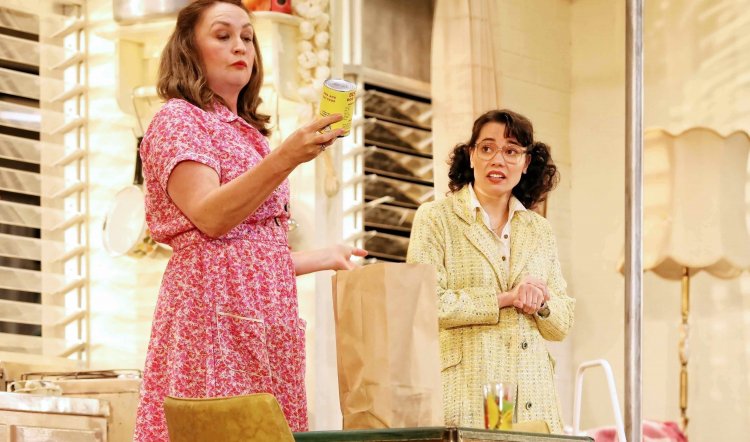 It started out in 1974 as Non Si Paga! Non Si Paga! and was translated in 1975 as Can't Pay? Won't Pay! And now, in the hands of director Sarah Giles and adapter Marieke Hardy, it’s No Pay? No Way! Either way, this far-left farce by Dario Fo and Franca Rame is their best-known work in the English language. And with Accidental Death of an Anarchist, (a wildly successful STC/Sarah Giles 2018 production) is still relevant almost 50 years on.

In her program notes Giles comments, “I think Dario Fo would be very upset to learn that his play…has as much relevance to Australia in 2020 as it did to Italy in the 1970s.” She has a point: the working poor is a growing sector of a filthy-rich first world. More than that, however, while Italy was a joke at that time for political instability, corruption and rampant corporate greed, today’s Australia is much the same. Porca miseria!

In No Pay? No Way! working-class Milan is in uproar over job losses and rising costs. When already-inflated supermarket prices rise overnight by 30%, local women jack-up, help themselves and scarper with their shopping. The play opens with Antonia (Helen Thomson) and her reluctant co-criminal Margherita (Catherine Văn-Davies) arriving in a clatter of panic and “liberated” groceries at Antonia’s apartment.

As good Catholic girls rather than urban terrorists, they are scared stiff they’ll be found out not only by the Carabinieri but also by their respectable Communist Party-stalwart husbands. When sirens blare Antonia’s loot goes under the bed and rather than be allowed to jettison her share, Margherita’s string bags are hung around her neck, her coat is buttoned and she’s suddenly pregnant.

How this is explained to a suspicious cop (Aaron Tsindos) and to Antonia’s husband Giovanni (Glenn Hazeldine) is in the gloriously bonkers tradition of farce: the crazier the premise, the more earnest the actors must be. And there are few who can be so inanely solemn in the face of the improbable than Helen Thomson and Glenn Hazeldine. 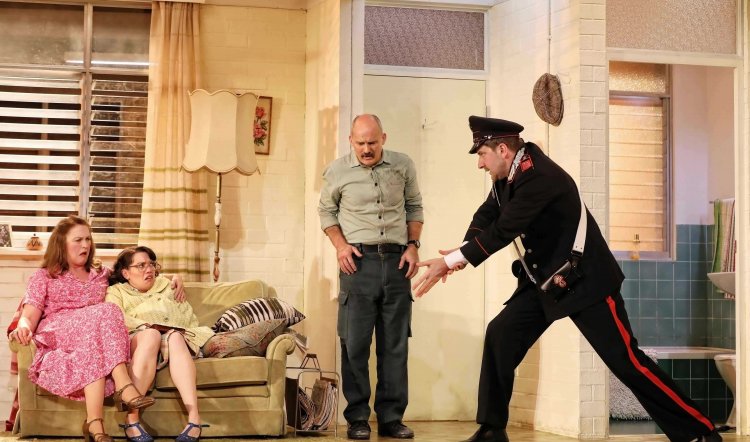 Trouble is, once a pregnancy is announced – to gullible Giovanni then to his pal and Margherita’s hubby Luigi (Rahel Romahn) – it has to be brought to term … or something. As the hapless sap Margherita, Văn-Davies is glorious when doing sudden onset-pregnancy breathing or hyperventilating as retribution looms.

Meanwhile, Antonia discovers that in her haste to emancipate tinned goods and fresh produce, she has inadvertently brought home dog food, cat treats and birdseed. She and Giovanni don’t have pets.

Starving hungry, Giovanni finds the dogfood on the kitchen table and Hazeldine makes comic magic with a can opener, some hesitation and the gelatinous mess. It’s followed by a classic audience-pleaser of Luigi’s unwitting encounter with the pooch glop.

All the best jokes come in threes, however, and here are all played by an energetic Tsindos. He’s a cop and closet anarchist who sympathises with the women. He’s then his boss, an arch-conservative and distinguished from the underling by a more ornate uniform; and finally, he’s an undertaker. There are a coffin and a wardrobe – but that’s much later.

Meanwhile, Antonia’s attempts to control the disasters of her ever more extravagant ruses bring out all the comic imagination and nuance in Thomson’s dillybag of brilliance. It’s a joy to watch her. 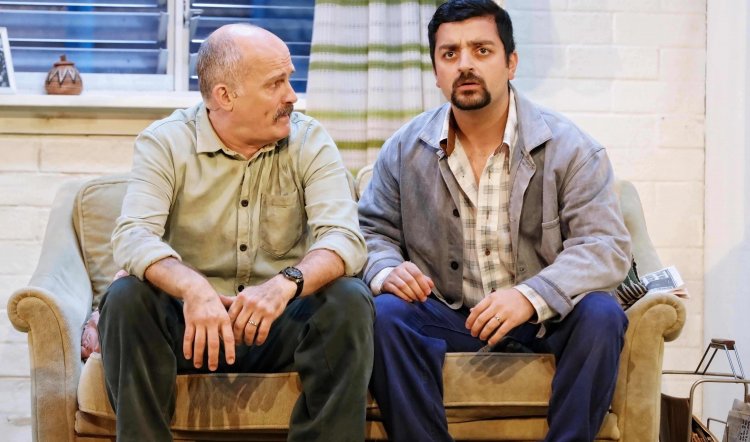 At the same time, the gifted company of actors has a tussle in dealing with a set that imposes itself from the beginning. It’s an ingenious design – by Charles Davis, lit by Paul Jackson – with a 1970s tenement block-cum-Transformer that gets its own round of applause. As Antonia’s apartment, pushed downstage in a naturalistic clutter for the first half, it majorly constrains the actors and is distracting.

Post-interval Brechtian political fun is had with stagehands and deconstruction. It’s from this point that, with actors and set literally freed from restrictions, Giles’ rare flair for slapstick comes into its own. Amid narrow escapes and hot pursuits there are glimpses of Keystone Cops, Michael Crawford and bodies hidden in wardrobes. Timing is everything and on opening night, it was immaculate.

Nevertheless, there’s something missing from No Pay? No Way! and it’s possibly the audience. When first staged in Italy, people not only laughed but were so outraged they left the theatre and did an Antonia. Mind you, it was also the Italy of the Red Brigades – when some could be so furious with hopeless leadership they kidnapped and assassinated a prime minister and terrorised the CEO class. Australia – not so much.

The most galvanised a Sydney crowd can be is over a new bespoke gin. When the cast, led by the honeyed voices of Văn Davies and Romahn, come together in Bella Ciao – fabled and melancholic 19th-century protest song – it’s likely many will think it’s been lifted from Netflix and Money Heist. As has been said before, those who fail to learn from history are condemned to repeat it. Pity, when some of the biggest lessons are to be found in comedy and laughter. Meanwhile, despite the Transformer, Thomson and Hazeldine and Co are superb.