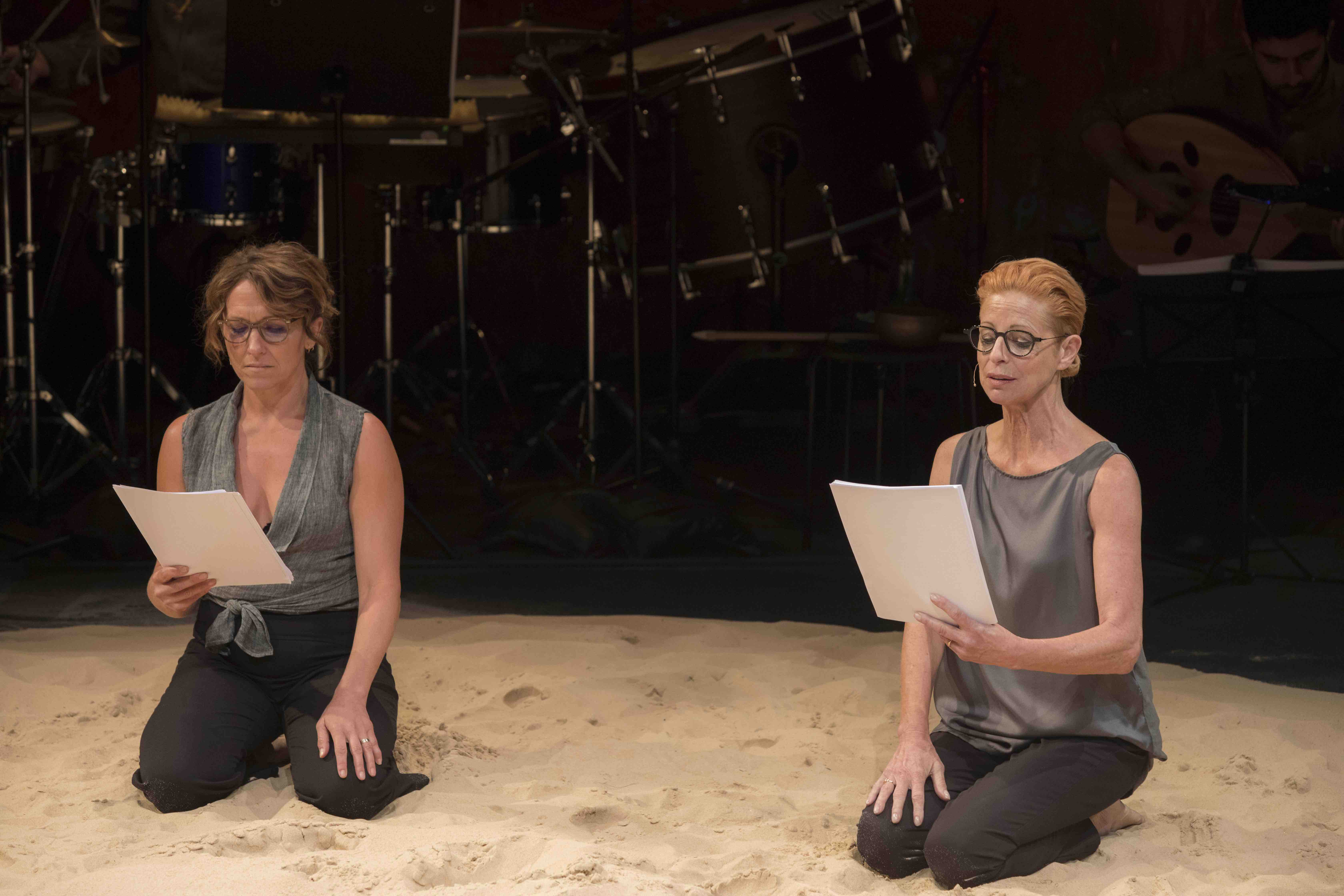 THE ILIAD – OUT LOUD, Scott Theatre for the Adelaide Festival, to 15 March 2020. Photography by Lisa Tomasetti and Jamie Williams: above - Blazey Best and Heather Mitchell; below - William Zappa; below again: Socratis Otto, Mitchell and Best

In 2019, at the Sydney Festival, this production was at Belvoir Street Theatre. At the time I wrote: “it’s to be hoped it won’t be long before some enlightened festival director takes it up.” A year later and Rachel Healy and Neil Armfield programmed The Iliad – Out Loud in the 2020 Adelaide Festival – a box office success before opening.

The stagenoise review from 2019 is what I thought then and after a day (11am to 11pm with breaks) at the Scott Theatre, it’s still true:

“It’s been seven-years in the making and William Zappa co-directed – with Damien Ryan – as well as appearing with actors, Blazey Best, Socratis Otto and Heather Mitchell, and composer-percussionist Michael Askill and oud play Hamed Sadeghi.

“This Iliad is a prodigious undertaking and a truly awesome achievement. In so many ways, of course, the 3000-year-old story of the Trojan Wars is as if written yesterday, for Netflix. It overflows with drama, violence, revenge, hatred, love, laughter and sorrow abounding, yet – in essence – it’s all Helen’s fault.

“She is such a beauty and so adored by Menelaus and then Paris, that neither has any defence against behaving incredibly badly in order to have her (sound familiar?) And so it is throughout the 24 books. Women, starting with young Chryseis and Briseis, are bought, sold, traded and otherwise used as goods and chattels when not being routinely raped and murdered. Domestic violence is a given even as international diplomacy feeds on the blood of women and girls.

“Listening to the stories, out loud and all together over a period of some nine hours, brings into sharp and shocking focus that which might be overlooked in a traditional reading (on holiday, in class, silently across many days or evenings). Basically, women don’t matter – well, no more than the endless numbers of lambs and cattle that must be offered up to the Gods with bloodcurdling frequency. 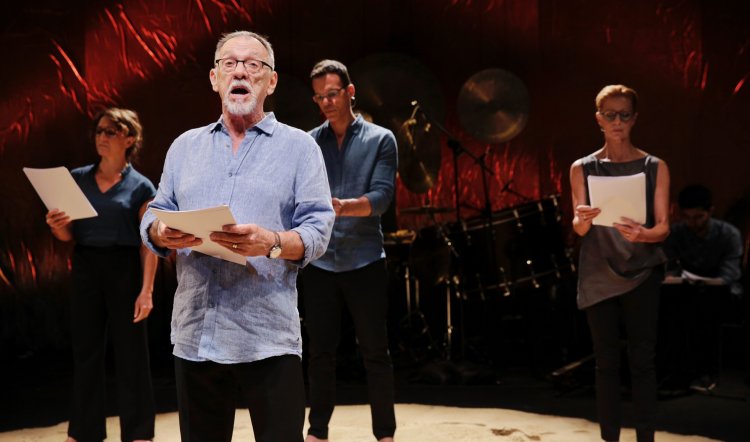 “What also becomes obvious as time and stories pass is Homer’s relish in describing the various acts of war and their effects on the human body. Zappa has incorporated 17 translations of The Iliad in this theatre version and it’s no coincidence that throughout, there is so much minute detail of methods of injuring and killing.

“A bronze-tipped spear through the nipple and into the lung is sickeningly common, while similar spears into the belly and fatally through the bladder is another. A sword or spear into the throat or jaw can often be counted on to split the tongue – resulting in a gurgling death. Then, so forceful are blows from the best of the warriors that arms are lopped off from the collar bone. Piquantly, one is reminded that handy rocks and boulders were normal weapons for the Greeks and Trojans: picked up and hurled to turn brains to mush and cause eyes to pop out of their sockets.

“Another thought that surfaces after a while is the alarming one that Homer clearly knew his audience – one which delighted in the minutiae of wholesale brutality. And that it’s obviously mirrored today in any action movie, X-Box or even Game of Thrones. The more things change, the more they stay the same.

“Nevertheless, the single most remarkable accomplishment of this Iliad – Out Loud is that the simple telling of it – by the actors, texts in hand, addressing us as readers as well as assuming character voices from time to time – remains mesmerising throughout. Rarely does it falter and this is partly because of the soundtrack and the setting, both of which contribute immensely to the visual and aural pleasure of the piece.

“On either side of the stage, a backlit list of the main protagonists – Greeks, Trojans and Gods – is displayed for easy reference. These prove handy during the wrangling over who to bless and who to curse or trip up and who to beg for favours.

“Dominating the rear of the stage, a gleaming bronze wall on which colour washes of light (Matt Cox) changes mood and atmosphere, is a simple and striking image especially for the central placing of Askill’s array of gongs, drums, cymbals and other paraphernalia. Beside him, Sadeghi sits, adding another layer of rich contrast to the human voices… 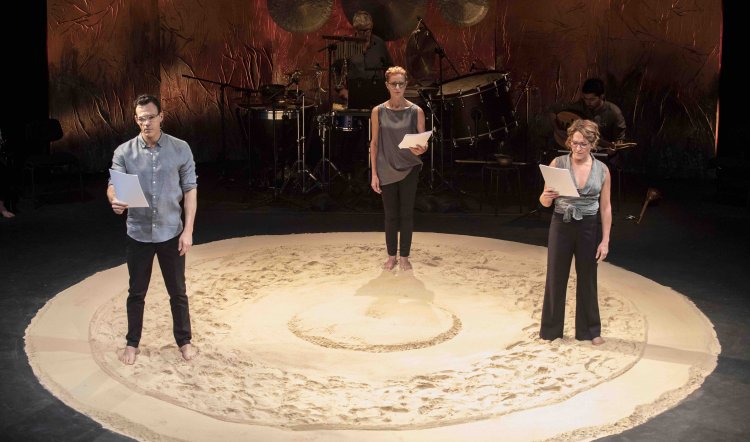 “In the centre of the stage is a tonne of fine sand, a circle on which the actors are on the beaches of ancient Greece, in black pants and shirts and tops in a subtle range of blue, teal and grey. (Set and costumes: Mel Liertz).

“…Whether as a God or a human from either side, they are continual reminders that it’s hard to tell the difference – that Gods can be more than appalling and often were, while those who worshipped them can assume the heights of love, compassion and decency when given half a chance. Or not...

“The actors deliver the story in conversational voice when not assuming a character role. It enhances the horrifying currency of what we hear and reminds us – if necessary – that 3000 years is a blink of an eye in human conduct.

“The Iliad – Out Loud is a challenging undertaking, for performers and audience alike. It’s also memorable and richly rewarding.”