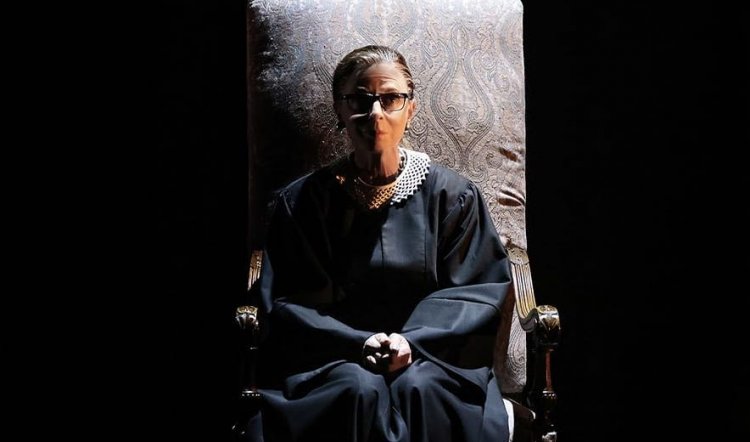 RBG: OF MANY, ONE, Sydney Theatre Company at Wharf 1, 3 November-23 December 2022. Photography by Prudence Upton

You may have heard that playwright Suzie Miller has achieved stratospheric recognition lately, being described as an “international” luminary as the author of Prima Facie of West End, Jodie Comer and soon, NYC acclaim. She is a classic “overnight success” having honed her craft to relatively quiet acclaim for decades. Her list of awards is lengthy; peer recognition includes two stints as mentee to Edward Albee, yet such is luck, it’s only now that (theatrical) household name status has been achieved.

How sweet it is, then, that her latest Sydney production is as fine as, if not finer than the very fine Prima Facie. If RBG: Of Many, One is not Broadway-bound in the near future, I’m definitely a monkey’s aunty. It’s another tour-de-force for a woman and an even greater challenge for the performer. In this instance, it’s Heather Mitchell, for whom Miller wrote the play.

As an actor Mitchel not only inhabits a role, but is also a shapeshifter. When she played Catherine McGregor in Still Point Turning (2018) she somehow acquired an aquiline profile as well as many centimetres of extra height – neither of which were true of the diminutive, non-aquiline woman, but you could swear you saw both.

As US Supreme Court judge and pioneering feminist icon Ruth Bader Ginsburg Mitchell achieves even more as she trips the light steps of a 16-year-old, switches to the arthritic stoop of old age;  shrinks, grows, is excited or furious, thrusts out a petulant child’s lower lip or the chin of implacable opposition to the conservative men of the Court. All the while she maintains an extraordinary sense of time and place both on the Wharf’s elegantly sparse and drape-framed stage (design David Fleischer) and through the long life of the woman she portrays. 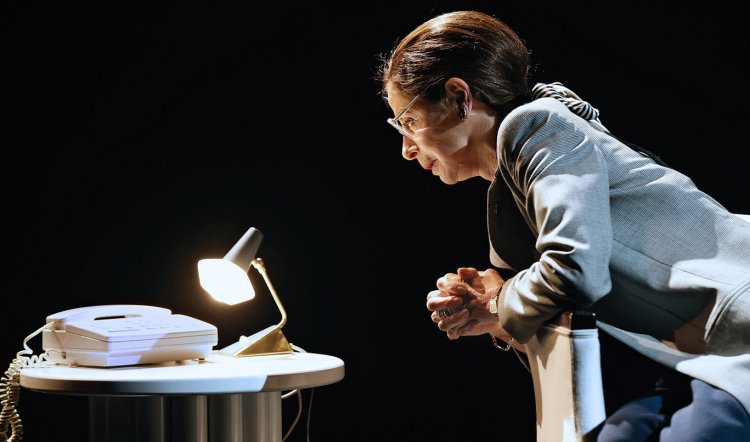 Catching up on Wednesday evening, a week into its run (now extended thanks to public demand), the play is an absorbing delight from its opening moments. This is due not only to the actor, but also to the subtle skills of director Priscilla Jackman – she wrote and steered Still Point Turning – and, it must be said, to the playwright. If Mitchell is the visible structure, Jackman is the master builder and Miller the foundation – without whom nothing could happen.

Ruth Bader was born poor in Brooklyn to parents who always sought to raise her ambitions. Her sixteenth birthday gift from her mother was a ticket to Tosca at the Met (she couldn’t afford to accompany her daughter and waited outside for the duration). This scene is immensely moving – as young Ruth encounters Puccini for the first time – it sets the tone for 90 entertaining and illuminating minutes.

Meeting and marrying Marty Ginsburg while both were at Cornell, Ruth’s feminism was a lived experience. At Harvard she was one of a tiny minority of women and not permitted to graduate. She transferred to Columbia to do so and because her husband had secured a job in New York City. Although she graduated top of her year she couldn’t get a job: she was a woman, she was Jewish and she was married. The career that unfolded was not a conventional one, but it became gradually more influential and pathbreaking.

All of this and more is revealed as RBG flits back and forth across her personal life and vocation. Throughout there is laughter, amazement and touches of levity and humanity. With the assistance of voice and accent coach Jennifer White, Mitchell glides fluently from youthful to mature and to aged judge as well as through her encounters with presidents and her lifelong love, Marty. 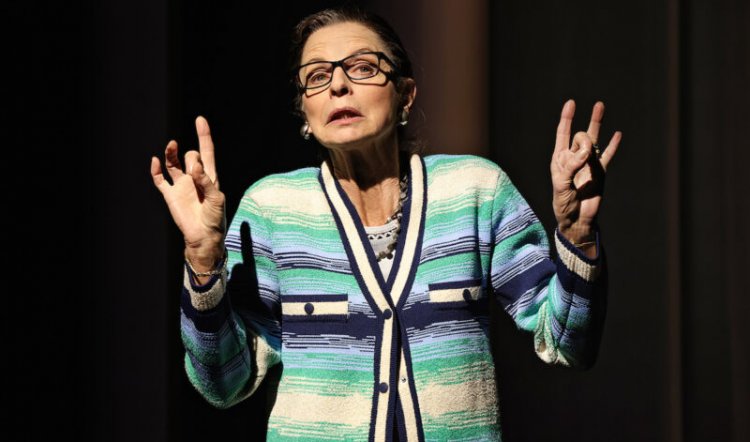 In addition to Fleischer’s spare staging – a white leather club chair, a legal throne, the drapes and tongue-in-cheek props for a Newsweek cover shoot, and a home gym set-up – there is Alexander Berlage’s sharply-realised atmosphere via spotlights and washes of colour. These are enhanced by Paul Charlier’s music/sound design, including a delicious sequence featuring Notorious B.I.G., that explains “Notorious RBG”.

The play is not hagiography, however. RBG’s self-acknowledged mistakes are painfully wrought in her own words. Ironically, it’s this shamed honesty from the great woman that bookends, with Puccini, the play's deepest emotions.

RBG: Of Many, One is yet another outstanding work from Suzie Miller and possibly, a lifetime performance from Heather Mitchell, although that’s a hazardous statement as both get better and better.

RBG: Of Many, One should be seen by every young woman – and men and women of all ages who may need reminding or telling of Ruth Bader Ginsburg’s impact. So much of what we know as social justice, equality and the status of women – worldwide – is her legacy. Recommended without reservation.