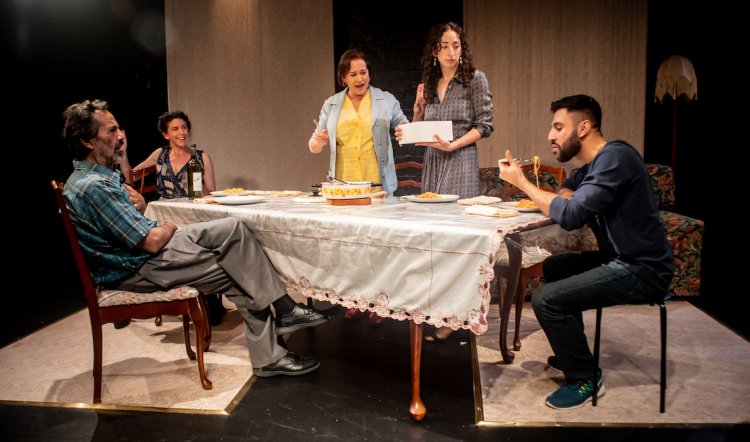 SON OF BYBLOS, 25A and Brave New World Theatre Company at Downstairs Belvoir, 4-21 May 2022. Photography by David Hooley, above: L-R Simon Elrahi, Kate Bookallil, Deborah Galanos, Violette Ayad and Mansoor Noor; below - Galanos and Elrahi; below again - Noor and Ayad

Adam (Mansoor Noor) shares a secret with his cousin Clare (Kate Bookallil): they are both queer. Clare has been in a committed relationship for four years; Adam’s scene is fleeting hookups where post-sex chat goes: “Do you want my number?” “No.” They also share an apparently unsurmountable problem: these young Australians are from a Lebanese working class immigrant family where there is no such word as “queer”, nor “independent”.

James Elazzi’s absorbing new play is set in western Sydney suburbia where the dining table is not only covered with a cloth but also with stout clear plastic. Adam’s father (Simon Elrahi) is only a shiver away from impoverished roots. He’s an unskilled toiler and cannot understand why his son doesn’t appreciate working in air conditioning rather than the midday sun. For his part, Adam wants only to set up as a website designer and is not a bit interested in a career in sales in his uncle’s furniture business.

Their lives are governed by Adam’s mother (Deborah Galanos) for whom he is her “habibi” and without whom her existence would be even more drab than it is. As well as keeping house for a man who can say from the comfort of the sofa “there’s someone at the door”, she works in a chicken factory and a decision to learn to tango – gently encouraged by Adam – is her only small escape. 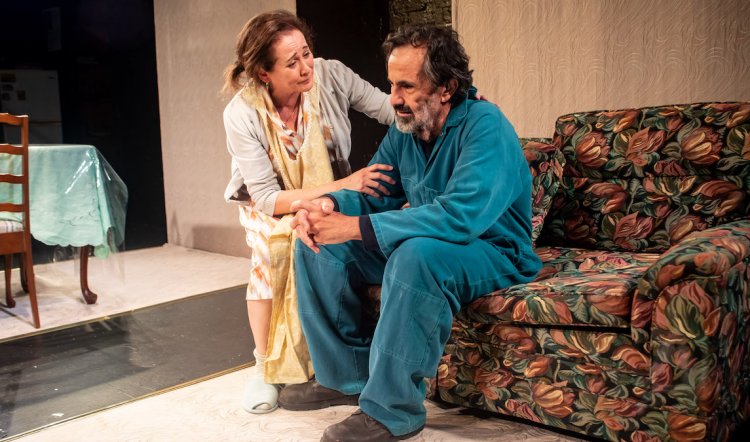 A rich picture of uneventful ordinariness is turned upside down when Clare returns from a visit to Lebanon engaged to Paul, a man she barely knows, who speaks little English and whose mother is a cow who may want to come and live with them in Australia. Adam is appalled for all kinds of reasons. Mainly he thinks it’s a terrible decision for Clare, who loves Kate, but just as important, it will mean he is abandoned to heteronormativity.

Angela (Violette Ayad) was the object of Adam’s last flutter with bisexuality and dumped two years before. When he texts her out of the blue she is rightly suspicious but still smitten. Suddenly there are several potentially disastrous messes on a collision course. The impact occurs around the plastic-clad dining table where Clare and Angela join a family dinner under doubtful and deliciously hilarious circumstances.

Son of Byblos is deftly directed by Anna Jahjah on a semi-realistic set that makes clever use of the Downstairs space (design: Olivia Auday and Antony Makhlouf, lighting: Larry Kelly). After the successes of Queen Fatima and Lady Tabouli, its 75 minutes are a further exploration of contemporary life within the bounds of a strict immigrant family culture. Now its Lebanese, once it might have been Irish, or Italian, or Greek, either way its universal as the strictures are unchanging, as is the desire of the first generation young to break free. 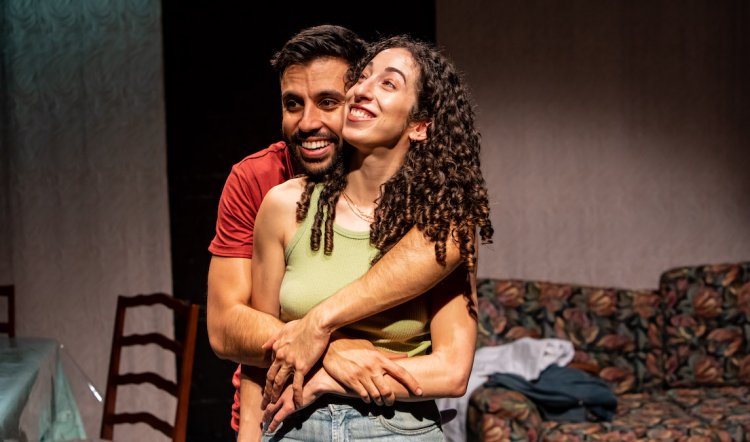 Elazzi’s quintet of characters are three-dimensional and authentic, with Galanos exceptional (as usual) as the weary matriarch whose crabby carapace protects a capacity for tenderness that’s heart-wrenching. And Noor shines as the young man caught between transient night-time pleasures and the harsh light of the everyday.

Bookallil and Ayad are also fine in their substantial supporting roles in which each is able to enjoy outstanding moments. Meanwhile, Elrahi’s old-style shouty dad could afford to dial back the volume but is still effective in his uncomprehending bewilderment.

The play was a finalist in the Silver Gull Play Award, which means the winner must have been something else, because Elazzi continues to thrill with each new work. This production is another highlight for 25A where a play is launched on a tiny budget and a committed company. Son of Byblos is rich with contemporary social and cultural life, heartfelt emotion and comedy that laughs with rather than at the characters. Do see it - recommended without reservation.