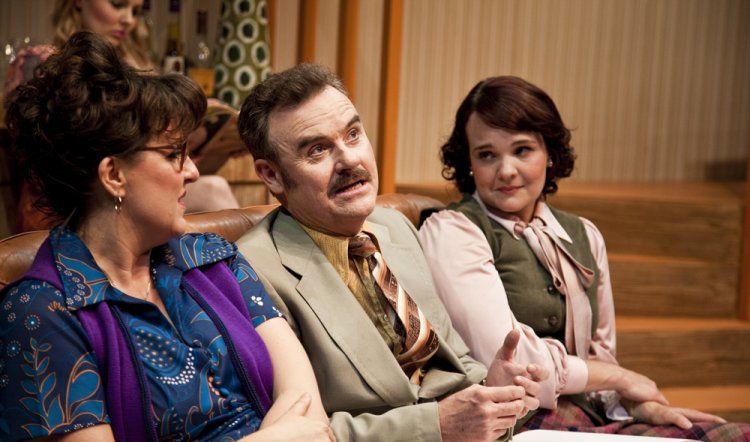 It’s only unreconstructed snobs who can’t acknowledge the place of Alan Ayckbourn in contemporary English-speaking theatre (he’s also been translated into 30+ languages). Uniquely honoured by both the West End and Broadway (Olivier and Tony lifetime achievement awards) and knighted in 1997, the modest 75-year-old playmaker celebrated the opening night of Roundelay, his 78th stage work, just three months ago!

Going back to 1974, however, and Absent Friends opened in London after the customary first season in Ayckbourn’s longtime theatre home, Scarborough. It came after popular and critical success with Relatively Speaking (1965) and How The Other Half Loves (1970), and a year after his greatest achievement of that period, 1973’s The Norman Conquests.

These plays had introduced mesmerised audiences to sharp social comedy most often constructed with Rubik’s cube-like symmetry and complexity. By comparison Absent Friends is a straightforward narrative, but its emotional intricacy is subtle and creeps up to deliver a final threnody making it not only satisfying but also unexpectedly sad.

Separated by differing structure and outcomes, the plays highlight Ayckbourn’s recurring structural themes, and a merciless portrayal of the aspirational lower middle- and middle class that was true to the times but also true to human nature and therefore timeless. Revisiting this bleak, insightful, easy-to-under-estimate play is therefore overdue.

Absent Friends takes place in a sitting room where the era’s most unfortunate signature colour - burnt orange - is much in evidence. (A witty and well realised set design by Anna Gardiner, lighting: Peter Neufeld.) Diana (Michelle Doake), in the most indescribably - and perfectly - awful outfit seen on a Sydney stage this year, has set out afternoon tea things, nicely covered with a cloth, to await her guests. Meanwhile, Evelyn (Jessica Sullivan) has arrived early as befits a young woman of another generation who neither knows nor cares for the niceties of tea party etiquette. She is chewing gum, sullenly reading Women’s Weekly and occasionally jiggling the pram in which baby Wayne sleeps.

Evelyn is married to John (Brian Meegan) a man of such twitchy demeanour and general incompetence it is inevitable he will be bullied by Diana’s husband Paul (Richard Sydenham). In 2014, when domestic violence and abuse are not only named but also so much a part of the social landscape, Paul’s polite but almost palpable aggression towards her is highly disturbing. When he tells her, with a smile that never reaches his eyes, that the last thing he wants is to entertain, it provokes shudders of recognition among women in the audience.

Oblivious to the undercurrents, Di’s oldest friend Marge (Queenie van de Zandt) arrives, all aflutter. She’s been shopping - cue a pair of hideous platform shoes - and left hubby Gordon at home with his permanently dicky health and a bottle of linctus. At some point it comes out that Diana suspects Paul is having an affair with Evelyn and the bristling yet civil hostility radiating from Marge towards the younger woman is as much cross-generational as it is moral outrage. 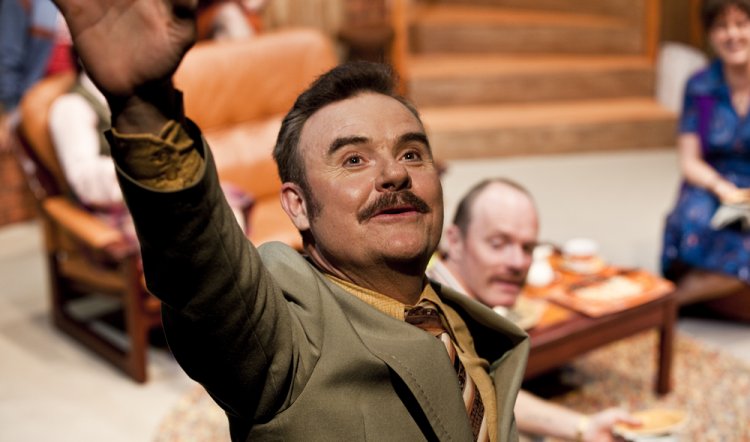 False bonhomie reaches another level when special guest Colin (Darren Gilshenan) arrives. His return after three years absence and the recent death by drowning of his fiancee Carol is something they’re all, quite frankly, dreading. It doesn’t help that the love of his life was someone he had known just a year and they had never met, so when he produces a cake tin full of photographs and a photo album, the discomfort levels sky rocket.

Ayckbourn has been likened to Chekhov for his similarly unerring ear and eye and subtle yet pitiless skewering of the foibles and foolishness of the middle class. But where the Russian master is often treated with a numbing reverence that leaches out the comedy, Ayckbourn gets the reverse treatment. There is pathos and pain at the heart of his best work and it’s often lost in the quest for laughs. Director Mark Kilmurry and his gifted cast have not made this mistake.

Setting out at a fast clip to draw in an unsuspecting audience with the laughter that comes from brilliant dialogue and sharply drawn characters, Michelle Doake and Queenie van de Zandt remind us that they are two of the finest comic actors in the land. More than that, however, they are among the smartest. They calibrate their performances so adroitly that when the mood changes in the second half, what happens to the two women – caught in a no-woman’s land between post-war good wifeliness and women’s liberation – is sobering and real.

As the beamingly merry bereaved, Darren Gilshenan is subtlety and nuance personified. His Colin is a terrific creation: blind to social graces while displaying the kind of unctuous good manners that trap others into sweaty bewilderment and dismay. Marvellous!

The out and out dark side of the male is represented by Richard Sydenham’s measured and gutsy portrayal of Paul. His is the thoroughly nasty “who me?” innocence of the passive aggressive emotional manipulator; the underlying malevolence is all the more disconcerting for the beaming smile that covers it.

In the supporting roles, Brian Meegan has never been better nor more troubling as the inadequate and hopeful John. His nervous tension translates into key jingling restlessness and his phobic responses to the subject of death and dying are instantly recognisable. At the other end of the physical spectrum, Jessica Sullivan is tasked with maintaining a tangibly venomous presence while rarely speaking, or moving from her perch. Her discipline and focus are an object lesson in unselfish and effective performance.

All in all the Ensemble’s end-of-year production is one that audiences should savour. In its portrayal of friendships that aren’t and marriages that will never be it’s a dramatic treat that delivers way more than one might expect of a domestic comedy; because of course it’s way more than that. And then there’s the Corningware...