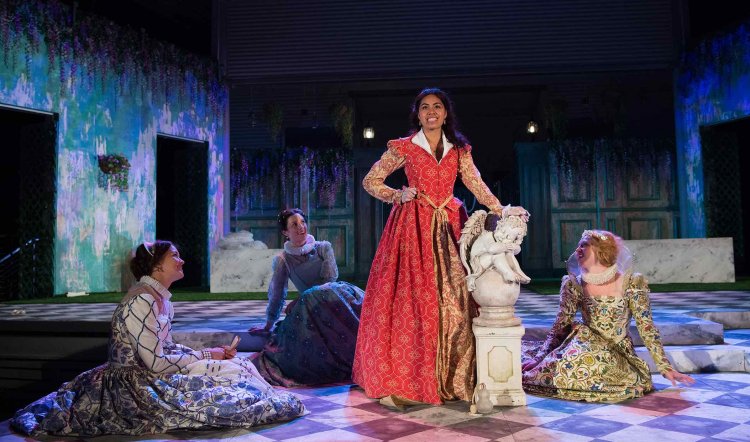 An early evening temperature of 38C is what confronted members of the audience as they got out of their air-conditioned cars at Elizabeth MacArthur’s old farm, Bella Vista on Sunday, 20 December. It was like walking into a fan-forced oven cranked up to full blast. It was . . . amazing.

Even more amazing, however, was that it appeared not to affect the actors in the slightest. And although the cynical might say “well they’re actors, they’re supposed to act like it’s okay to be turning into crispy-skin long pig” that they carried on as if they were in an enchanted forest glade in Olde (temperate) England was remarkable.

The enchanted glade is actually the Hills District Council’s new purpose built stage pretty cutely transformed from utilitarian-modern with dangling wisteria and evocative painted shadows on the side walls. The new structure sits at the foot of the grassy slope to the west and below the historic farm house and beautiful old timber shed where Sport for Jove previously performed.

And while the building is functional rather than picturesque, the big advantage is in the space, comfort and sight lines for audiences – picnicking and casually seated in what is now a natural amphitheatre. There is also a proper lighting rig, secure storage, wing space and, of course, the stage – more stuff for the imaginative minds behind SfJ to play with.

One welcome imagination is a (sort of) double bill: the evening begins with a half hour confection: Shakespearealism, written by Josh Lawson and deftly directed by first-timer Lizzie Schebesta. It’s about The Bard’s younger brother, the tragic and today unknown Ralph Shakespeare (Edmund Lembke-Hogan). Ralph was a passionate playwright and the author of five works for the stage, we join the action as he is trying to persuade jaded impresario Philip Henslowe (James Lugton) to stage the fifth. Aided and impeded by two actors from the company that’s about to go on stage in Love’s Labour’s Lost, Gabrielle Scawthorn and Aaron Tsindos, the comedy is a delicious roast of bad actors, worse scripts and every other cliche in the book. Come early and don’t miss it.

The main business of the night, however, is the rarely performed Love’s Labour’s Lost, and it’s a treat. The plot is of course ridiculous and Damien Ryan has both edited and added to the entertainment value with some witty updating of the dialogue. In essence, the King of Navarre (Edmund Lembke-Hogan – urged to stop writing bad plays and continue acting – see paragraph above) has three mates, Dumaine (Curtis Fernandez), Biron (Tim Walter) and Longaville (Gabrielle Scawthorn, this time sans her Shakespearealism  pencil moustache and definitely a girl playing a boy).

For reasons best known to Ralph Shakespeare’s elder brother, the young men vow to one another that they will forswear wine, women and song for three years and study instead. This unlikely promise is immediately dealt a fatal blow with the arrival of the Princess of France (Emily Eskell) with her ladies, Rosaline (Sabryna Te’o), Maria (Lara Schwerdt) and Katherine (Madeleine Jones). That’s really all you need to know about that part of the plot. 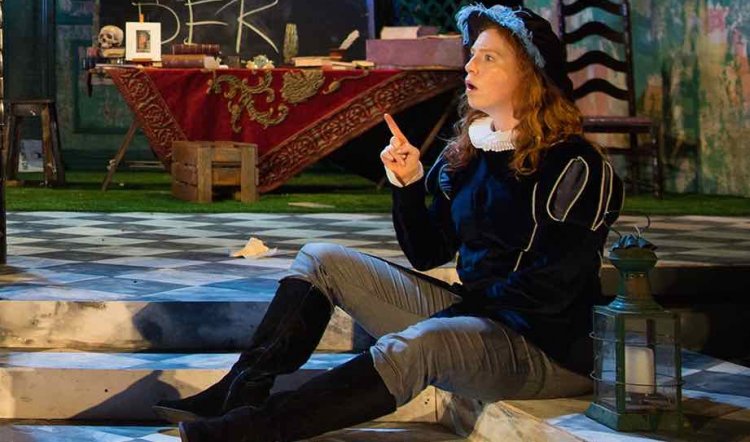 The side dishes are equally delicious, however, with a humorously bookish and prolix Nathalia (Wendy Strehlow) finding herself flushed with unseemly urges towards the intellectual Holofernes (James Lugton) who uncannily resembles Severus Snape’s sexier younger brother. In further nods to the classes and classic comedy, Claire Lovering is the gorgeous maid Jaquenetta who is – naturally – hotly pursued by lanky Spanish nobleman, Don Adriano de Armado etc etc (Berynn Schwerdt); while George Banders is the innocent rustic Costard and Scott Sheridan is the officious paper-shuffler Anthony Dull, kitted out here as a ranger from Aquitaine Parks and Wildlife.

The production looks sumptuous, beginning with the lush bracts of wisteria to the “marble” tiled floor, statuary and – in particular – the Elizabethan costumes. It’s such an age since a Shakespeare or any other non-contemporary play has been garbed in period costume, it seems positively avant garde and designer Melanie Liertz has wrought miracles on a budget of next to nothing.

The actors too go beyond the ordinary in achieving engaging performances that, in this instance, kept the audience rapt and delighted despite the extreme heat. The vocal demands may be a bit much for some, with no amplification and the need to project into open air, and it’s where the greater experience of the likes of Strehlow and Lugton become obvious. (In The Importance of Being Earnest, SfJ’s other rep offering this summer, Strehlow and Deborah Kennedy are able to make every bon mot and quip audible without a shriek or obvious effort between them.)

So … take a picnic, take a rug, take your family, take your friends and relax in the talented hands of a director and company of actors who will, for a few enchanted hours, transport you to a silly, funny and romantic place.

Nobody does it quite like Sport for Jove and Love’s Labour’s Lost  is no exception. Recommended.