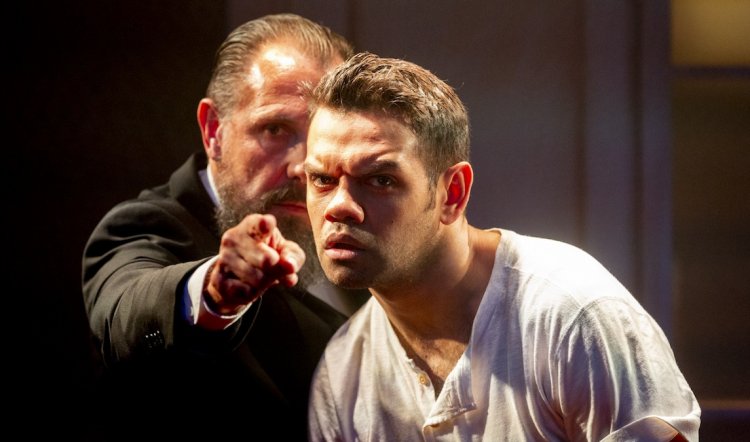 To date, Meyne Wyatt is best known to audiences as a dynamic stage and screen actor. From Silent Disco (award-winning at the Stables) to Neighbours (first indigenous character in the ancient soapie) via numerous other movie, TV and stage roles, Wyatt has enlivened any production in which he’s appeared. Now he can add playwright to his list of accomplishments.

City of Gold is a remarkable play, opening with a scene of what turns out to be characteristically acid-dipped humour. In it, as TV commercial director Christopher Stollery films an ad for lamb and Australia Day, he embodies every clodhopping, well-intentioned white man ever to insult a person of colour. His klutzy behaviour makes every other white person in the audience (the majority, that is) cringe even as they chortle.

Anyway... Breythe (Meyne Wyatt) is an actor, living and working in the big city but called home to Kalgoorlie when his father dies. There is instant antagonism from his older brother Mateo (Mathew Cooper) and exasperation and peacemaking from older sister Carina (Shari Sebbens). Softening the spiky encounters is their cousin Cliffhanger (Jeremy Ambrum) a young man who is deaf but not stupid – despite the way he is treated by most.

Breythe is classically caught in no man’s and everyman’s land: to Mateo he is the sell-out to white society who couldn’t be bothered to get home in time for their father’s funeral. To the white-dominated city and entertainment industry he is that coleur du jour: young, gifted and black – but not too black. Not that he’s ever cast as “Australian”, or Hamlet, but always “indigenous” and likely to be either a drunk, a junkie, or prancing about with a spear and body paint. As the TV director says of what he wants: “It’s got that Ten Canoes vibe...”

So… Breythe is angry and disillusioned, cynical and sad. And the few days he spends in his home town preparing for the funeral do nothing to alter that. Casual interactions between white and black illustrate the consequences of the universal lack of opportunity for an ill-educated underclass. It means fear and violence from the whites and despair and rage from the blacks. It’s a toxic culture that offers nothing positive for either. And then there’s the family dynamic. 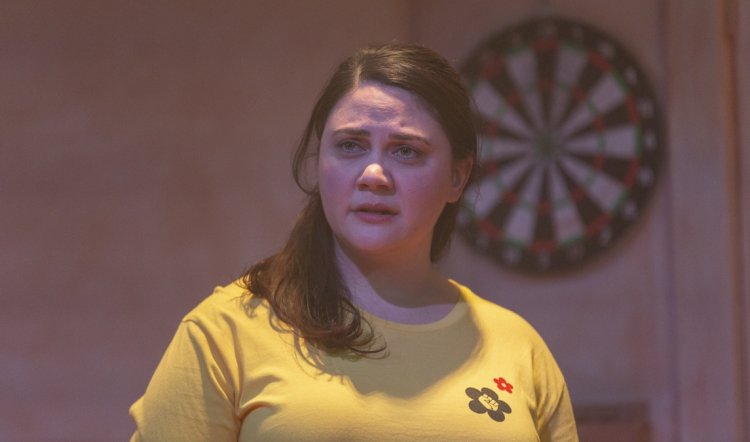 Mateo is jealous and belligerent, Breythe feels guilty and disheartened. The clashes between the two, fuelled by Mateo’s fallback to beer, as well as Cliffhanger’s childlike efforts to keep up with them and Carina’s increasingly frustrated interventions are beautifully observed, written and performed. The political issues that steadily arise are equally strongly portrayed.

City of Gold initially charms and draws in its audience with sly humour and wit. Inevitably, as the truths of being black in 21st century Australia become more and more apparent, the work becomes more polemical and less easy on its white audience. The reasons for this – the need for this – are all around us, every day and in more ways than most care to think about.

Wyatt was still in nappies when Jack Davis’s No Sugar was written and not much older when it played to stunned audiences at Belvoir. Close to 30 years have passed yet the themes of that seminal play, and its reasons for being, could be used to describe today’s City of Gold:

“The play explores the marginalisation of Aborigines in the 1920s and 1930s in Australia under the jurisdiction of a white government. The pivotal themes in the play include racism, white empowerment/superiority, Aboriginal disempowerment, the materialistic values held by the white Australians, Aboriginal dependency on whites and the value held by the Aborigines of family.”

It’s shocking to realise that, wrapped in the familiar sights and sounds of family life, is a play that accurately portrays a society which is virtually identical to that of a century ago. That City of Gold can be lauded on the one hand and criticised on the other – “oh, it’s so important” versus “but it’s so angry” – is a grotesque fact of contemporary Australia. 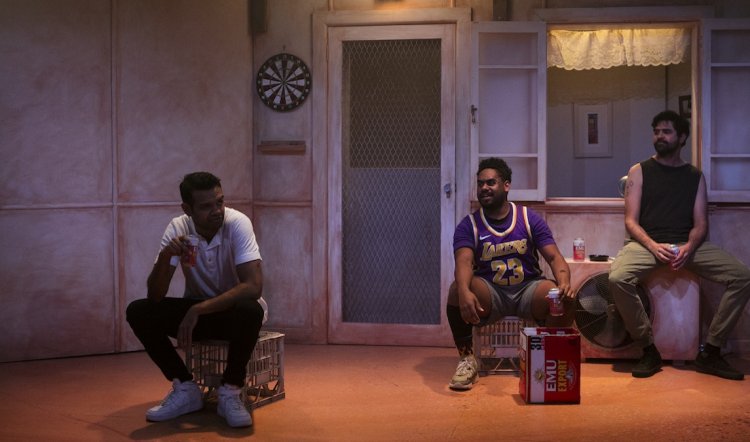 City of Gold shouldn’t be important: Wyatt shouldn’t have had to write it. And audiences (a minority, at least) shouldn’t be snippy about his anger and need to tell it like it is. Again.

Meanwhile, director Isaac Drandic has drawn rich performances from the cast, first among equals being Wyatt as a version of himself and Shari Sebbens as his understandably exasperated sister. Mateo’s volatility is well handled by Mathew Cooper, while Jeremy Aubrum’s Cliffhanger is their gentle foil. In the rewardingly awful roles of various white men, Christopher Stollery and Anthony Standish are excellent; and Maitland Schnaars is a properly ghostly presence as the unquiet dead father.

The set – a red dust and iron house frontage designed for QT by Simone Tesorieri and Simona Cosentini and lit by Jason Glenwright – works well, adapted from a large stage to the Stables space; Nathalie Ryner’s costumes also hit the mark as does Jason Glenwright’s composition and sound design.

Sadly, City of Gold is an important and urgent play – for a new generation. It’s tough and craftily uncompromising and also wickedly entertaining. Recommended without reservation.