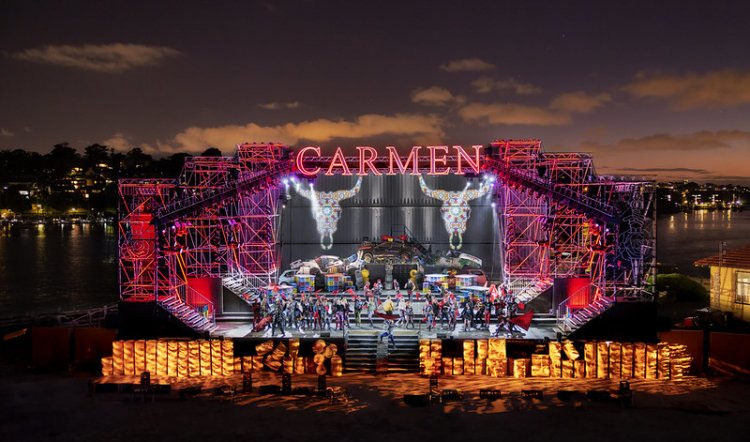 The much-anticipated “event” which is Carmen on Cockatoo Island began auspiciously on Sydney Harbour with a ferry ride into a classic early summer evening of golden light and vivid blue sky.

Arrival onto the World Heritage-listed industrial site is fascinating in itself with structures ranging from an immense flooded dry dock hewn from the island’s sandstone to a massively imposing turbine shed, to an unnamed, hideous 1960s relic that might once have been Admin.

On this opening night of the short(ish) season of outdoor opera, arrivals are shepherded by smiling volunteers to a harbourside lawn where tables, benches, and a bar await. And, across the way, the catering set-up.

The only disappointment in an otherwise magical evening is the currently available food. It’s not good. A fair-size serve of hot chips was the high point. During the run, however, the island’s own Merchant Mealhouse will also be serving “pizzas, quick bites, and desserts” – a far better option.

NB for audients: no matter how balmy the day might be, evenings on an island will become breezy and cool – layer up. Cockatoo is still an industrial place – there are bits of railway and many different and uneven surfaces. So don’t be vain: wear walking shoes and be comfortable and safe. And if you’re susceptible – take mozzie spray. Then be prepared for a wonderful experience.

The opening moments of Carmen on Cockatoo Island reveal that this is no ordinary iteration of Bizet’s romantic tragedy. Stunt bikers roar around, doing wheelies and even zooming up a ramp onto the stage. This will either thrill you or have you grumping into your thesaurus for joyless synonyms. Either way, it sets the tone for a cracking night of music and drama showcased by Mark Thompson’s set of wrecked cars, oil drums and milk crates. It’s backed by a ratty metal screen on which scritchy-scratchy hints and mood setters are projected. 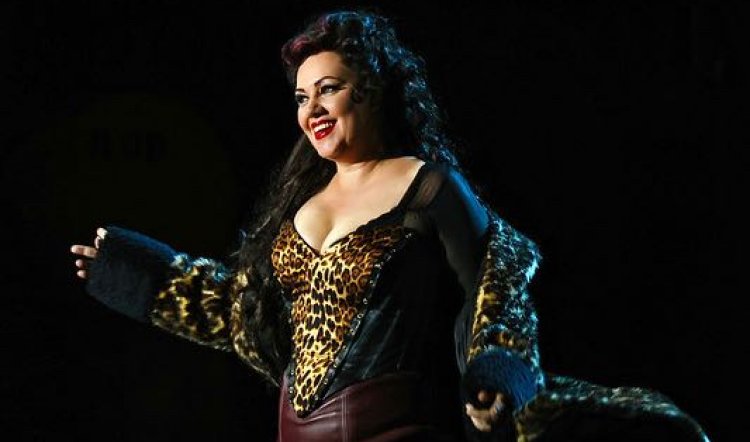 On either side are scaffolding towers, either darkly forbidding or transformed into fairyland at various moments. John Rayment’s lighting is entirely complementary. Many high-slung clusters of lamps flood the stage and audience with colour and atmosphere.  They also focus attention on soloists as they perform from various parts of the expansive, multi-level set or from within the massed ranks of chorus and dancers.

It’s helpful as Liesel Badorrek’s direction has the singers, chorus, and dancers constantly on the move. This is emphasised by Shannon Burns’ exceptional choreography: the dancers bring to the stage flashes of West Side Story’s gang warfare, jazz, and contemporary ballet.

Without hitting an anachronistic pothole, the production is of today – Thompson’s kaleidoscope of urban-grunge-steam punk costumes sees to that. The unselfconscious contemporaneity also stems from Badorrek whose political approach echoes Lindy Hume’s unforgettable “controversial” feminist Carmen of twenty years ago.

In a recent Australian Financial Review interview, Badorrek laid down her law for the opera: “I want to challenge that shrugging off we still see when it comes to operas that contain violence against women – ‘Oh, that’s just a crime of passion’ or ‘Oh, that’s just a story’ – because these cultural texts inform the way generation after generation feel about gender.”

Carmen, Badorrek says, is “a woman who refuses to be constrained” and that’s how Romanian mezzo Carmen Topciu plays it in a performance enticed from her by the director (and gloriously taken up on alternate nights by our own Sian Sharp).

As Carmen’s love Don Jose, Roberto Aronica is hunky, in great tenor voice, and unhealthily smitten, despite having a fiancee, the pastel-nice Micaela. This emotional depth is particularly relevant when he realises he’s lost Carmen to Escamillo and decides – naturally – that he won’t take her “no” for an answer. In our age of men violently taking the lives of “their” women virtually every week, Aronica’s Don Jose is chillingly excellent. 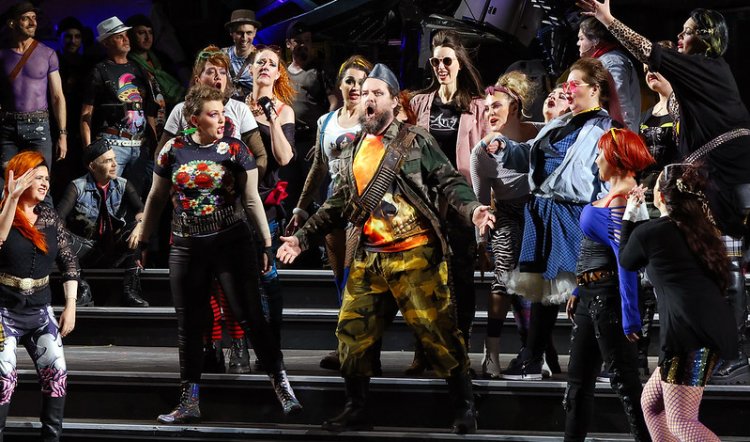 As the matador Escamillo, bass-baritone Daniel Sumegi makes a deliciously ballsy entrance in wraparound shades, glittering scarlet shirt and black caped suit, strutting like old Elvis amid hurled knickers and bras. He too sings magnificently which is extra remarkable as all the varied voices, orchestra and chorus are the overall responsibility of sound designer extraordinaire Tony David Cray (also behind the excellent sound of Handa Opera on Sydney Harbour.)

The principals are rounded off (and up) by Danita Weatherstone (Micaela), Jane Ede (Frasquita), Agnes Sarkis (Mercedes), Alexander Hargreaves (Dancairo), Richard Anderson (Zuniga), Adam Player (Remendado) and Haotian Qi (Morales). The orchestra and chorus, tucked away in a building close by with Tahu Matheson in command, make a remarkable contribution to the night.

It must also be said that the creative and unstoppable forward impetus for this amazing enterprise must be laid at the departed feet of former artistic director Lyndon Terracini. He wasn’t there on the night, but in the bonkers and fabulous, crazy-brave spectacle, he sort of was. Bravo.

A great night out for all the family. Recommended without reservation. (And you can buy a $5-biodegradable poncho onsite if you should need one.)